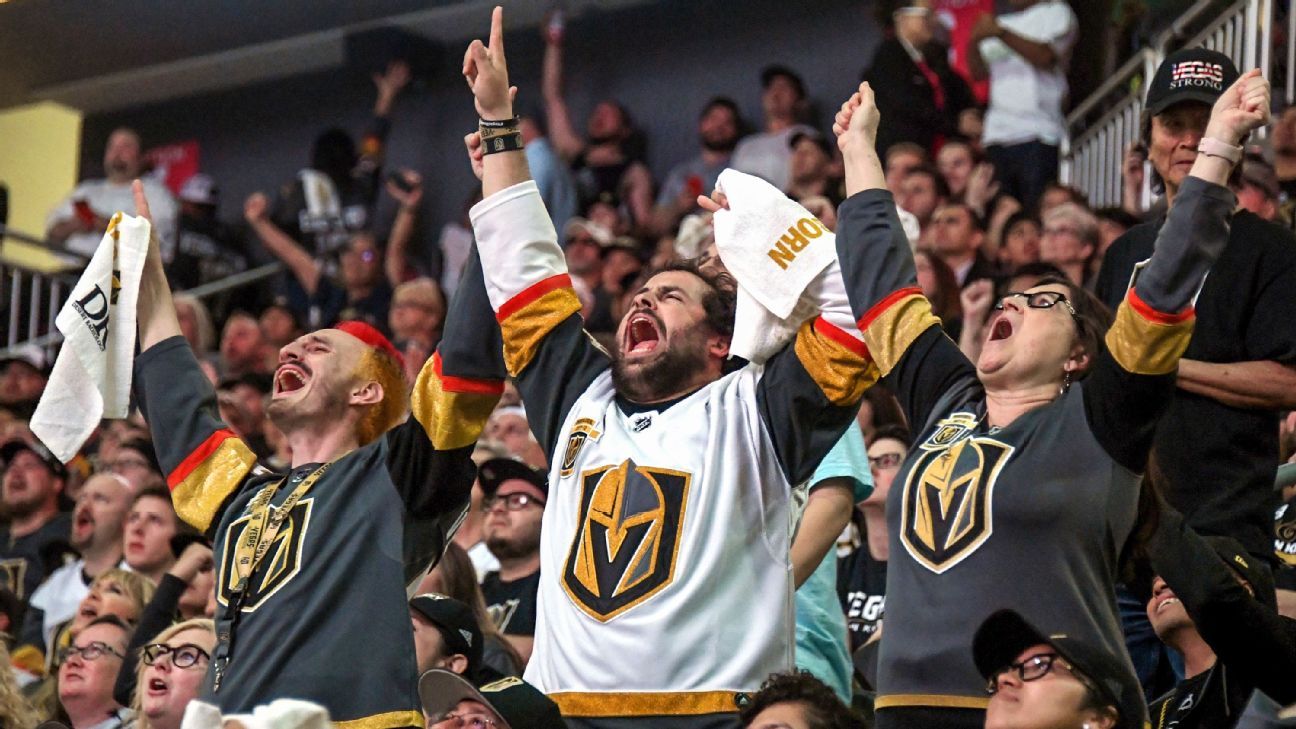 Las Vegas is home to more than 600,000 residents and generally speaking, they avoid the Strip like the plague. The community holds a sense of pride and ownership in it, of course, but as far as actually spending time there — no thanks. Too expensive. Too much traffic. Too many tourists.

During Game 1 of the Final, however, the Las Vegas Strip belonged to the locals. The city’s beloved Knights joined the 1967-68 St. Louis Blues as the only true expansion team in the history of sports to reach a championship round in its first year of existence. And the magic continued that night, as the Knights defeated the Washington Capitals 6-4 inside T-Mobile Arena.

Follow our celebration of United States hockey and the 40th anniversary of the Miracle on Ice:
&• Inside the miracle: How USA won »
&• Bucci’s top 20 American-born players »
• America’s top hockey hotbeds »
• How Seattle is bringing hockey to all »

That night proved a certain point, one that had been up for debate before the Knights’ inaugural season. It proved hockey could work in the desert. The entire scene showed that yes, it unequivocally could.

Now, as the city, the team and the sport of hockey itself moves forward in this newfound kinship in the desert, the question is no longer “Can hockey work here?” It’s “Will it always continue to work here?”

“There’s no question it has worked. It has worked better than anyone could have ever dreamed,” said lifelong Vegas resident and ESPN radio personality Adam Hill. “But now the tests will come. First, with the Raiders coming in 2020. The NFL sucks so much attention and energy away from everything else. Media resources are dedicated to it. The NFL is king. How will it do against that?

“And then, how will this town react when the Knights are finally not good? It happens to everyone. Sports are cyclical, and at some point they are not going to be an elite team. What then?”

Darren Eliot didn’t set out to get a “doctorate” in non-traditional hockey markets. His career just worked out that way.

Eliot, the Vegas Golden Knights’ vice president of hockey programming and facility operations, played in the NHL from 1984-85 to 1988-89, primarily for the warm-weather market Los Angeles Kings. In his post-playing days, he’s worked in two non-traditional hockey markets: Atlanta and Las Vegas.

In all his years in the game, Eliot says he has never witnessed a bond between a city and its team like the one that currently exists in Las Vegas. It’s a reciprocal love, and a unique one in sports.

“I’ve seen an extreme and extremely rare love affair between the fan base and the hockey team,” Eliot said. “And what’s taken me aback is this group of fans who say, ‘OK, this is our team. I don’t know anything about hockey, but I’m gearing up with my VGK attire and I’m learning about the sport.’

“Something struck me as soon as I got here one year ago. The bars, they play the games with the sound on. That doesn’t happen across the country. Yes, the game is on, but other stuff is going on. Here, it’s the focal point. We’ll routinely get 100 fans to attend our practices. On game night, there are more people in their seats for the puck drop than any team I’ve ever seen.”

The Knights are averaging a home attendance of 18,281 in their third regular season. T-Mobile Arena’s capacity for hockey, according to the venue, is 17,500, meaning Vegas is averaging 105.3% of capacity, which is fourth highest in the league. The team’s star goalie, Marc-Andre Fleury, has the fourth-highest selling jersey in the league this season.

The city’s “love affair” with a professional hockey team is surprising in many ways — but not completely. Long before the Knights’ arrival in 2017, Las Vegas considered itself a pro sports town without a team. Former mayor Oscar Goodman was a loud advocate for getting a professional team, and for years, the city held hope the Sacramento Kings might relocate to the desert, where its former owners, the Maloofs, lived.

When the moment finally arrived, and a Las Vegas pro team was announced, it was met with a mixture of excitement and befuddlement.

“It was kind of amazing to watch how that attitude changed as the first season got closer,” Hill said. “People got excited. There was a real civic pride about something coming to Las Vegas that belonged to Las Vegas. It wasn’t a team moving here, it was a team being born here. I’ll quote one of the players, [left winger] Max Pacioretty. He said he never understood the obsession people have with this team, and it took him a while to understand it when he came here after the team’s first season.

“There are not hockey fans in Las Vegas. There are Golden Knights fans. He came from playing in Montreal where hockey is life, and the team is just part of that. Then he came into this market and found a town that just loves its team. They are learning what offsides is and what icing is, but they’ve immediately embraced the sport through this team.”

Las Vegas also built a very strong, emotional connection to the team before it even played a single game at home. On Oct. 1, 2017 — just nine days before the Knights were scheduled to host their very first home game — Las Vegas fell victim to the deadliest mass shooting in U.S. history, when a gunman opened fire on an outdoor concert on Las Vegas Boulevard, killing 58 people.

When the Knights did host their first home game on Oct. 10, team captain and Las Vegas resident Deryk Engelland delivered a unifying address to the sellout crowd prior to puck drop. The team proceeded to an immediate 4-0 lead in the first period — including a goal from Engelland.

Since that very first moment, the Knights have been Las Vegas’ team. The city adores VGK. It’s a VGK city. And quietly, there has been a lot of effort to make it a hockey city as well.

Technically, there has never been a single hockey player from Las Vegas in the 102-season history of the NHL — but the truth is, there really has been one.

The Pittsburgh Penguins‘ Jason Zucker, a second-round draft pick in 2010, was born in Newport Beach, California, but moved to Las Vegas before he celebrated his first birthday. It might say Zucker is from California in the game night programs, but he considers himself a Las Vegas native.

Zucker’s interest in hockey began in roller hockey. His father, Scott, had no knowledge in the sport, but he did his best, along with other parents, to coach his son’s team. There were league games on Saturday, and that was about it. Zucker frequently played in the streets with his older brothers, but there wasn’t much in the way of organized practice.

“Eventually there was enough interest, we formed a travel team,” Scott said. “We drove to California … and got completely demolished. We thought we were good, until we started traveling.”

Jeremy Schaap sits down with Mike Eruzione, Jim Craig and Mark Johnson and talks about the 40th anniversary of the United States’ improbable triumph. Watch on Saturday at 2 p.m. ET on ABC, or at 9 p.m. ET on ESPN2.

By the age of 11, Zucker had transitioned to playing ice hockey in the winter, on one of the three sheets of ice that existed in Las Vegas. One of the sheets was located in, surprise surprise, a casino.

Zucker’s talent and dedication was obvious to his parents and others. He tried out for and made a team in Los Angeles, and began traveling to California for four days every week. He came to know every Southwest flight attendant on the route to Los Angeles by name, and he was the only player on the team not from California.

In 2007, when Zucker was 15, he moved in with a host family in Michigan, where he could seek a high level of hockey and play in front of scouts with the USA Hockey development program. To this day, he remains the only player from Nevada to ever earn a spot on the U.S. national team.

And accomplishing all of this, Zucker admits, did require him leaving Las Vegas.

“I think at 15, if I would have decided to stay home, maybe there’s a chance I could have played college,” Zucker said. “But leaving and getting that exposure in the Michigan market, it was very easy for the U.S. team to see me, where they wouldn’t have in Las Vegas. That was a big reason I was fortunate enough to play in the U.S. developmental program.”

“Las Vegas has helped the sport in that they are driving the marketplace by opening their own sheets of ice,” said USA Hockey assistant executive director or membership Kevin Erlenbach. “The team opened a facility with two sheets and are already opening a second facility with two more. That’s the way you see nontraditional markets grow.

“I remember in 2016, when they first announced the team name, I was here and there were 200 people lined up outside a facility, waiting to try hockey. Some of the other nontraditional markets in the past weren’t as invested in rink development. The Knights have been.”

According to USA Hockey, there were 99 registered hockey officials in Las Vegas, compared to 38 in 2016. According to Eliot, various leagues around the valley have consolidated into the Vegas junior Golden Knights. Eliot says he’s using strategies in Las Vegas similar to those he used to grow hockey participation in Atlanta years ago, but it’s more streamlined now. In general, the league has gotten better at building a hockey infrastructure — and Las Vegas is accepting it with open arms.

“The NHL has gotten smarter and knows it can’t just plop a team down in a city where it’s not part of the culture,” Erlenbach said. “In the past, nobody saw the true need to extend the brand through youth hockey. They said, ‘We’ll put the team there and it will grow.’ But you have to build that infrastructure, not just so kids can play, but to truly develop your fan base.”

On any given weekday night, the junior Golden Knights will host multiple practices at the NHL club’s City National Arena in the city’s northwest quadrant. Hundreds of players across a wide range of age and skill level pour into the facility every day, oftentimes leaving with more VGK gear from the team shop in the front of the building.

Anyone on the premises will tell you: Hockey works in the desert. Better than anyone would have ever guessed, actually. And although all good runs tend to come to an end in Las Vegas, this feels like the long haul.

“It’s been proven hockey can work here,” Eliot said. “Now, it’s my and many others’ job to keep striving and prove it’s sustainable. Long term, you have to keep moving forward on so many levels, not just the NHL product on the ice. But people have certainly shown they are ready for it here.”