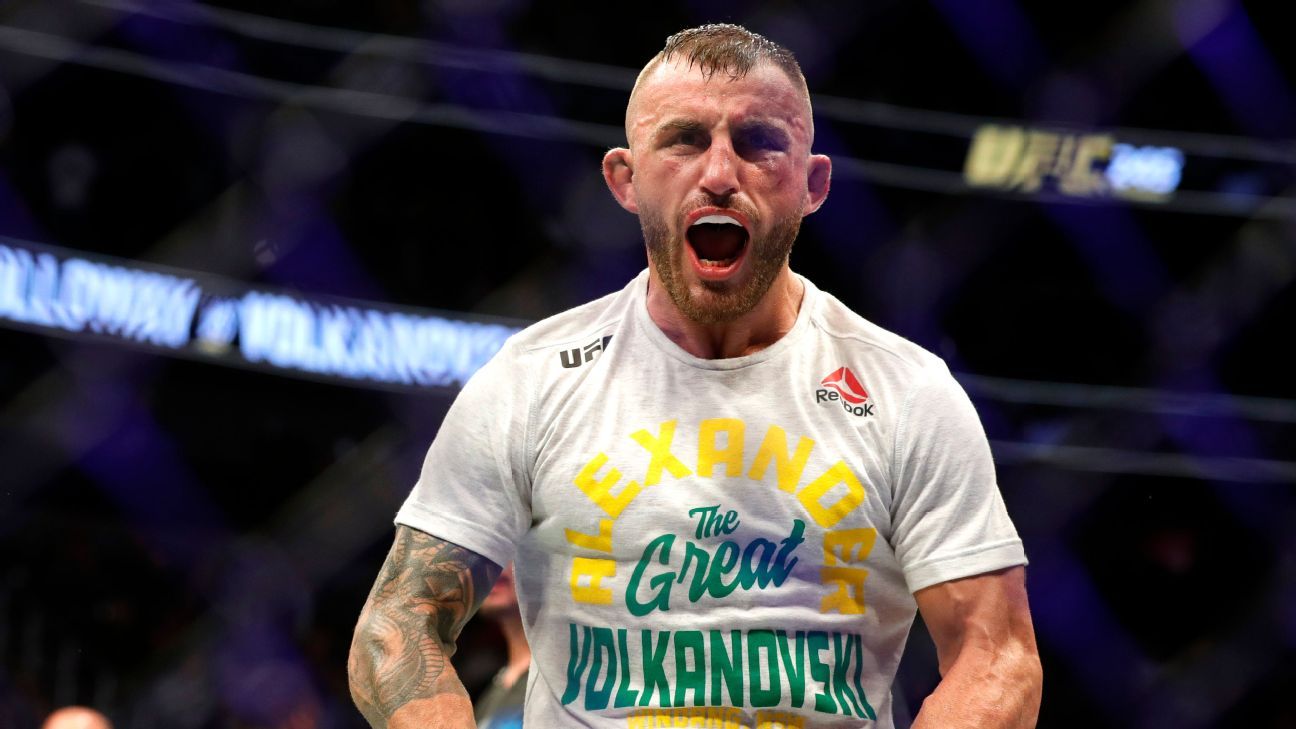 Cejudo (15-2) last week called out Brazilian veteran Jose Aldo and Volkanovski as the fighters on his wish list for 2020, despite the fact he would have to go up another weight class to take on the Australian.

Cejudo was just the seventh fighter in UFC history to hold titles in two separate weight divisions before he relinquished his flyweight crown, and a potential showdown and ultimately a victory over Volkanovski would put him in uncharted territory within the world’s premier mixed martial arts competition.

The scope of the challenge of going up to featherweight wasn’t lost on Cejudo, the American referencing the fact that “a lot of people will probably laugh” at his desire to conquer another weight division.

And that’s exactly what Volkanovski (21-1) did Wednesday when Cejudo’s comments were put to him in New Zealand, where he is currently helping City Kickboxing teammates Dan Hooker, Kai Kara-France and Brad Riddell prepare for their bouts this weekend at UFC Fight Night Auckland.

“I think it’s cute, little Cejudo, I think it’s cute,” Volkanovski told ESPN with a chuckle. “Nah, I’m only kidding, I’m probably only a little bit taller than him. But I’m too smart and when it comes to power, I’ll squash him. He better be careful what he wishes for.

“Nothing but respect to him, he’s done some cool things. But you don’t want nothing of that (a fight against Volkanovski), I honestly don’t think he wants [anything] of that.

“Obviously there’s a few people saying my name at the moment, but that’s what happens when you’re the champ. So let them call my name, good on them, they’re trying to get themselves a fight and nothing but respect. But come fight time if you get that wish, you’re going to regret it real quick once you’re in that ring with me.”

Volkanovski’s first title defense is expected to be announced next week, and it appears the Australian will get the chance to fight on home soil. ESPN understands Perth and Sydney are the leading contenders to stage the event, with both cities pushing for their first UFC events since 2018 and 2017, respectively.

Volkanovski is understandably excited about the possibility of defending the title in Australia. Meanwhile, his recovery from a hand injury suffered in his victory over former featherweight champion Max Holloway is also progressing well.

“The hand’s all right, it’s not too bad,” he told ESPN. “Obviously I’ve been training the whole time and doing a lot of strength and conditioning; a lot of left-hand [jabs] and left hooks. Now I’m starting to drill some light wrestling and light grappling, stuff like that, but I’ve just got to be careful.

“Obviously I can’t put too much weight on it and slam my hand down or punch too hard; I’ve worked my way around it but I’m finally able to do some more stuff. I’m getting a few sessions in a day, which is good because I hate sitting on the sidelines.”

If Holloway is indeed confirmed for a rematch, Volkanovski will be ready to go. But should it be someone else across the Octagon, the Australian’s only wish is that his opponent has truly earned a title shot.

“I’m not going to just fight anyone,” he said. “As I said when I won that belt, it was earned not given. People that are ranked sixth but they think they’ve got a decent name, and they cut right in front of the line, I don’t think that’s fair. Again, do I have that pull or that choice? I don’t know, it depends on what the UFC gives me. But I want to get the guys that deserve that [title shot] just like I did. Go out there and take that No. 1 contender spot and come fight me.

“If they do believe that Max is the man, that he deserves that rematch … he was a great champion and probably does deserve that rematch if that’s really what he wants. I don’t even know if he wants that? But we’ll give it to him. Whoever earns it or deserves it, bring it on.”

Volkanovski’s immediate focus is supporting Hooker, Riddell and France through the final days of their UFC Auckland preparation and then cheering them on ringside come Sunday.

“They’re fighting on home soil … it’s much bigger than just the fight for them. It’s something different, it really is.”