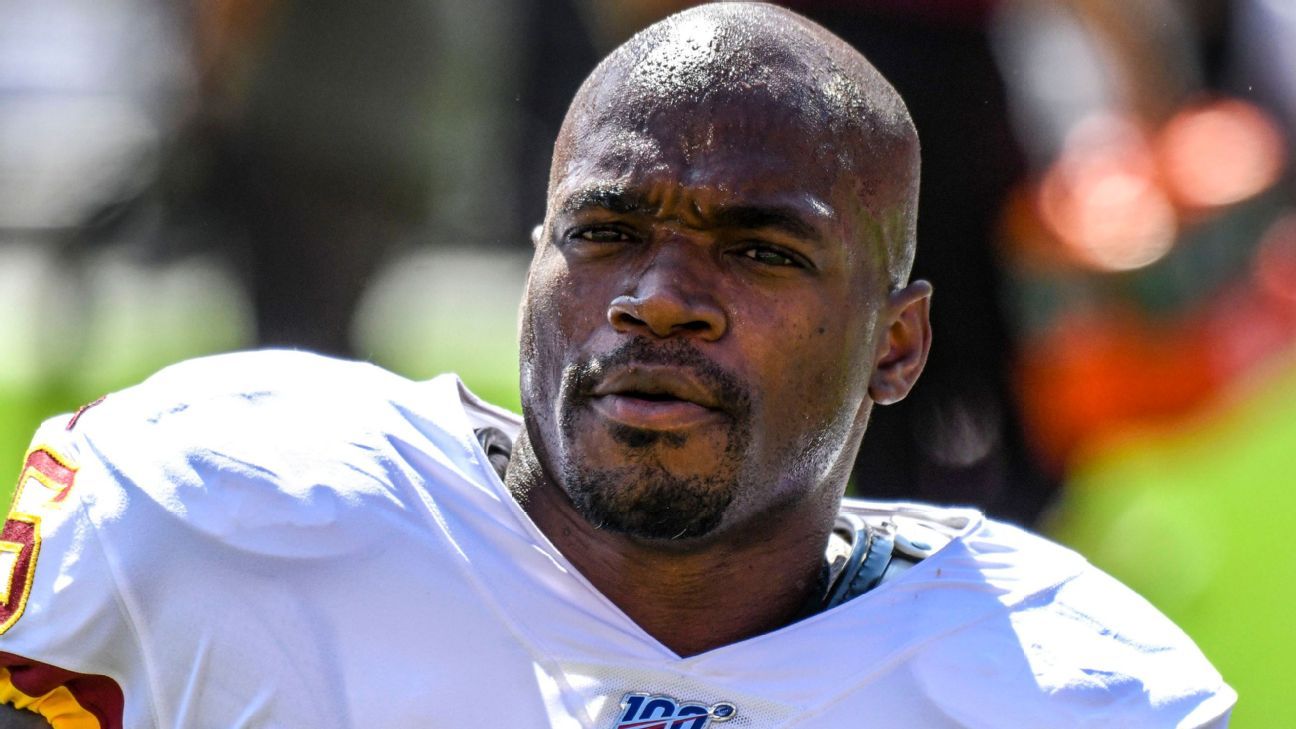 ASHBURN, Va. — Over the last two seasons, running back Adrian Peterson remained one of the most durable and productive players for the Washington Redskins, which is why the team exercised the option year of his contract for 2020 in a move that was widely expected.

Peterson had signed a two-year deal with the team option last offseason. He’ll receive a $2.25 million base salary with a roster bonus of $109,375. He carries a $3.1 million salary cap hit.

The Redskins had communicated to Peterson that they planned on picking up the option, according to a source, but didn’t have to make it official until no later than 22 days before the start of the league year on March 18.

Peterson has played in 31 of 32 games since joining the Redskins; he was a healthy inactive in the 2019 season opener vs. Philadelphia. Despite missing that game, and playing for a team that finished 3-13, Peterson still managed to rush for 898 yards and five touchdowns. In 2018, Peterson rushed for 1,042 yards and seven scores.

Teammates and coaches raved about Peterson’s work ethic and humility in the locker room.

“Adrian Peterson is the epitome of what it means to be a pro in this league,” new Redskins coach Ron Rivera said in a statement. “Adrian’s leadership and passion towards the game of football will set an example of what is expected of the players in this program moving forward.”

The Redskins also have Derrius Guice, who has suffered three knee injuries in his first two seasons. He has flashed potential for big plays — averaging 5.83 yards on 42 carries last season — but has never carried the ball more than 10 times in an NFL game.

Washington also drafted Bryce Love in the fourth round last year; Love was coming off a torn ACL late in his college season and did not play last season. Chris Thompson, the Redskins’ third-down back, is a pending free agent.

Peterson ranks fifth in all-time rushing yards with 14,216 and is fourth in rushing touchdowns with 111. He needs 1,054 yards to surpass Barry Sanders for No. 4 on the all-time list and trails Marcus Allen by 12 rushing touchdowns for the third spot.

Casemiro double leads Man United to FA Cup win
Audit: LSU accidentally overpaid Kelly $1M in ’22
Simmons, Embiid ‘duke it out’ before wild crowd
Sources: Dolphins not expected to pursue Brady
The USWNT needs Julie Ertz but she won’t be at the World Cup. What now?