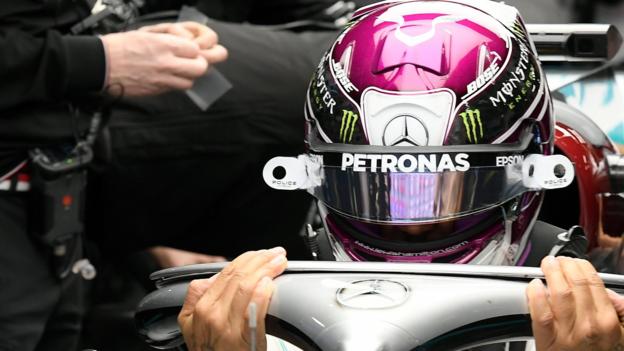 Lewis Hamilton started his 2020 Formula 1 campaign with a powerful statement of intent as he topped the first day of pre-season testing.

Hamilton and team-mate Valtteri Bottas shared the driving for Mercedes and ended the day first and second fastest.

The world champion was 0.337 seconds quicker than Bottas, who headed Racing Point’s Sergio Perez by 0.062secs.

Hamilton’s time was set on the ‘hard’ compound of tyre, whereas Bottas and Perez were on the faster ‘medium’.

Bottas described the day as “a nice starting point” and said: “The car feels good.”

Ferrari had a low-key day that started with an enforced driver change.

Four-time champion Sebastian Vettel had been due to drive but he had to withdraw because he was feeling unwell and the German went back to the hotel to recover after taking part in an official F1 start-of-term photo with the other drivers.

Team-mate Charles Leclerc took over instead and ended the day only 11th fastest.

Whether deliberately or otherwise, Leclerc’s initial notes after his first run in the car were captured on camera, and they said that he had experienced some understeer – lack of front grip – in the long-duration, low-speed corners on the Circuit de Barcelona-Catalunya.

There was an encouraging start to the year for Williams, who are keen to bury memories of last season when they had the worst season in their history, with a car nearly 1.5 seconds slower than the next slowest on the grid.

The lap times were very fast, and there was some remarkable reliability – there was not a single on-track failure leading to a red flag during the day, a remarkable feat for the first day of testing.

The start of the day was marked by the emergence of the final three cars not to have had an official launch in the run-up to the start of testing – the Alfa Romeo, Haas and Racing Point.

The Racing Point turned the most heads for its similarity in many design aspects to last year’s title-winning Mercedes.

Racing Point, who will be rebranded Aston Martin in 2021 following owner Lawrence Stroll’s takeover of the sportscar company, have a technical partnership with Mercedes that includes buying the engine, gearbox and suspension from the champions and using their windtunnel.

And although the team are required by regulation to design their own aerodynamic surfaces, they have produced a car that looks in many areas a virtual facsimile of the Mercedes from 2019.

A positive start for Williams

Williams made an encouraging start to their season after the disappointments of 2019, when they were by far the slowest team.

This time last year, Williams did not even have a car ready for the first two and a half days of testing, a failure that ultimately led to the departure of their technical chief Paddy Lowe.

This time, their promising British driver George Russell was first out on track, an achievement Williams described as “cathartic”, and he set eighth fastest time.

Russell said: “It’s feeling good. It’s definitely an improvement on last year. It’s difficult to get a read so far but from within it feels nice to drive. Obviously lap times are the important thing and we’ll only know by the end of next week how that is.

“Last year was far from ideal and the team have done a really great job to achieve that and the build quality of the car is so much better standard compared to last year. Things fit properly and the car looks better from a design perspective, so I think overall it’s been a very positive morning.

“It was definitely a character-building year last year and I’m confident we can go racing this year and have a bit more fun than last year and that’s what we are all hoping for.”

Formula 1: Sexist comments ‘do not reflect’ FIA boss Mohammed Ben Sulayem’s beliefs
Advantage, Novak Djokovic in the race to be tennis’ GOAT
Duke’s Whitehead (leg) out Saturday vs. G-Tech
‘You only fight him because you have to’: Why nobody wants to get into the ring with light heavyweight champion Artur Beterbiev
Car hits McGregor’s bike, ‘could’ve been dead’