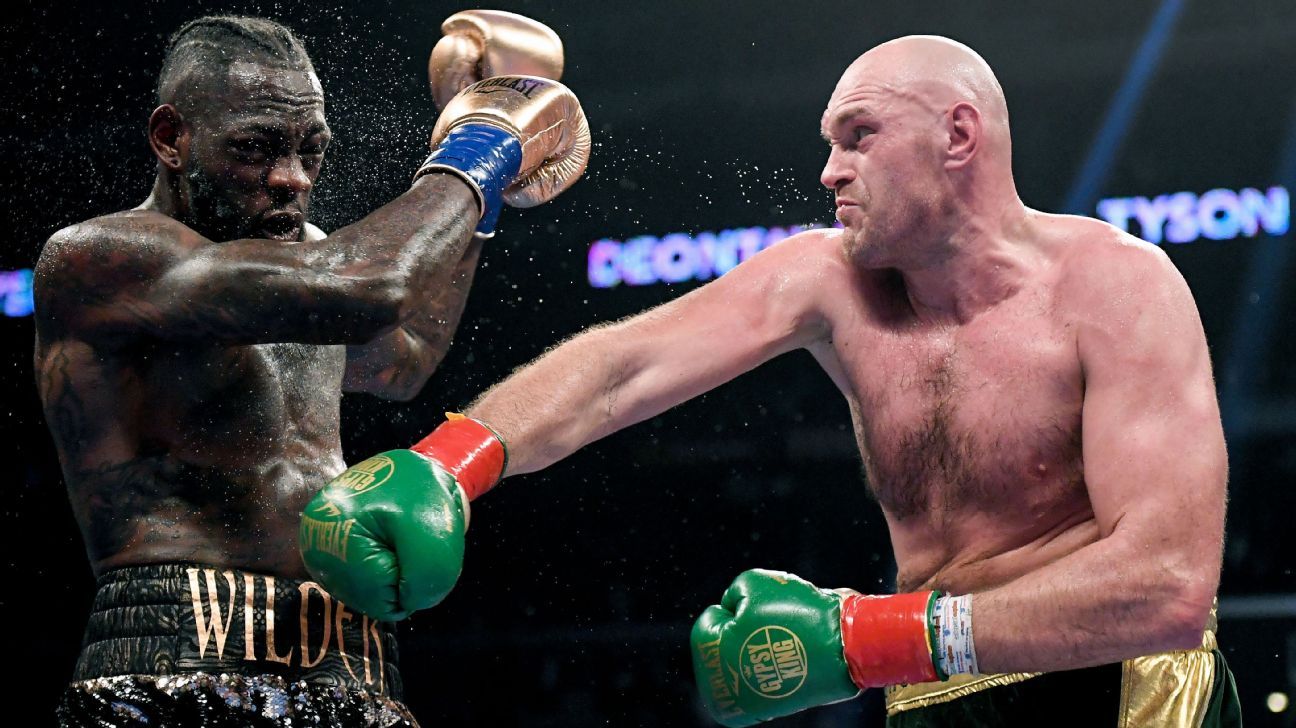 LAS VEGAS — In the summer of 2010, a 21-year-old Irish Traveler showed up unannounced at the Kronk gym in Detroit and requested an audience with the renowned trainer Emanuel Steward.

“I’m the next heavyweight champion of the world,” Tyson Fury said.

“I just remember looking up and seeing this big, tall white guy — nobody’s ever come in the gym that tall,” says SugarHill Steward, then a Detroit cop with a side gig as his uncle Emanuel’s chief apprentice. “So naturally I just ignored him. A lot of people come into the Kronk gym saying they’re going to be the next champ.”

There was a name for these would-be champions at the Kronk. “Fresh meat,” recalls Fury’s cousin, former WBO middleweight champion Andy Lee. “You’d open that door and the heat just hits you — it’s overwhelming. Then there was this guy called ‘Bam,’ and he’d be shouting, ‘Fresh meat, fresh meat! We’re gonna get you, white boy. We’re gonna get you.'”

Lee, a Traveler from Limerick, Ireland, spent seven years at Kronk, starting in 2005. Fury only stayed a month, at the end of which, Lee recalls, “There were no heavyweights left. He emptied out the gym.” But that month remains with Fury, perhaps now more than at any moment in the intervening decade.

“One of the best times in my life,” he called it in his recently released autobiography, Behind the Mask. What’s more, a decade later, with Fury predicting a second-round knockout in his rematch with Deontay Wilder –The Bronze Bomber, the division’s most lethal puncher — that month may well provide the best insight into a strategy that, if successful, could prove as famously improbable (if less suddenly improvised) as Muhammad Ali’s rope-a-dope knockout of George Foreman 46 years ago in Zaire.

HILMER KENTY, STEWARD’s first champion, was a 5-11 lightweight. Milt McCrory was a six-foot welterweight. But Tommy Hearns, at 6-1, made the Kronk prototype iconic. They were local kids: lean, angular, devastating punchers.

By the turn of the century, however, Steward had a stable of fighters from around the world, the most prominent of whom were heavyweight champions Lennox Lewis and, later, Wladimir Klitschko. It’s difficult to imagine that Fury — as ambitious and boxing savvy as he is — went to Kronk without intending to learn everything he could about Klitschko, the man he’d eventually relieve of his three championship belts.

In short order, Fury was living in Steward’s house. Steward made sure Fury had a bed long enough to accommodate his ample frame, and gifted him a pair of boxing shoes. They talked. A lot. “About everything,” Fury says. “He wasn’t just a boxing trainer. He was a mentor, a friend. He had so much knowledge. I was like a sponge, soaking up all the information.”

“Emanuel’s bedroom was upstairs,” Lee recalls. “I was in the next room. And Tyson was next to me. SugarHill was downstairs. We really bonded.

“One of the things Emanuel talked about was what makes the Irish Travelers such good fighters — their heritage. If they were Travelers, they didn’t have a home. So if they went somewhere new, they were the outsiders, and they had to fight. It’s just a way of life.”

While Fury only stayed a month before returning to his wife and infant daughter, the impression he left was indelible. He wasn’t just 6-9 with an 85-inch reach. You could already see what he had a chance to become: the most fluid heavyweight since Ali.

“Emanuel had never seen that in a big man before,” SugarHill says. “He could see things in people.”

“Emanuel said Tyson would be heavyweight champion of the world,” Lee says. “He always thought he was the best young heavyweight out there.”

Steward died of colon cancer in 2012. Aretha Franklin sang at his funeral. Many of his 41 world champions attended. Still, there would be more, future champions who’d honor him posthumously.

In 2014, Lee won the WBO middleweight title. Then, the following year, wearing the shoes that Steward got him, Fury dethroned Klitschko in Germany.

THE FIVE YEARS since have been consistent only in Fury’s capacity to surprise.

After winning the titles, he fell into a deep depression.

He drank and drugged and said he seriously considered — in the driver’s seat of his red Ferrari, at a high rate of speed — about running into a bridge.

With the aid of a young trainer named Ben Davison, though, he was able to regain his stature while dropping more than 100 pounds. There was the thrilling draw with Wilder in December, 2018. Then the deal with Top Rank and ESPN. And a lucrative stint with WWE. But as Fury began preparing for the rematch with Wilder, he parted ways with Davison. Splitting with your trainer on the eve of your biggest fight is typically not a good sign. Word is, the breaking point was money. No surprise there; it’s boxing.

The hiring of SugarHill (who was originally to come in as Davison’s assistant) followed a brief dalliance with seven-time trainer of the year Freddie Roach. “Me and Andy Lee had a conversation,” Fury recalls. “I was going to bring in somebody with experience, and we came up with a conclusion: SugarHill.”

Fury posted a photograph with SugarHill and Lee from Kronk with a caption: “Getting the old team back up and running.”

Still, coming from a fighter who maintains that he could train himself, it wasn’t really a surprise. For Fury, mercurial is the norm.

But then, at the inaugural news conference for the biggest heavyweight bout of this still young century, Fury vowed to meet Wilder in the center of the ring. “Just watch out for the right hand,” he told him, “because you’re going to sleep in two rounds.”

That was a surprise.

As with all things Fury, it seemed to be done with a wink. The best boxing big man since Ali wasn’t going to box. Rather, the boxer was going to knock out the puncher — not just any puncher, mind you, but the scariest puncher the division has seen in many years (not to mention a guy who put Fury down twice in their last four rounds). It wasn’t merely counterintuitive. Strategically speaking, at first blush, it sounded slightly insane.

He didn’t really believe this, you thought. He just wants Deontay to believe it.

Perhaps. But in the weeks since, Fury hasn’t merely doubled down on his professed stratagem. He has become so resolute, you can’t help but believe it.

“I can outbox Wilder, not a problem,” Fury said in a recent interview with ESPN. “But I’m not going to get a decision. … I’m going to knock him out because I need to. …There ain’t no Tyson Fury points victory in America over the longest-reigning heavyweight champion. I’d rather die than do that. I’m going to drag Wilder to somewhere he’s never been before.”

“Two rounds. … It’s going to be an easy fight. … I’m going to knock out the knockout specialist.”

Again, he was asked, “You’re not going to box?”

Fury doesn’t lack for a plausible rationale. There are several, starting with the judges. Wilder has uncanny timing and, arguably, the most destructive right hand in boxing history — but he needs distance to throw it. Hence, the safest place for Fury is on the inside, where Wilder’s technique is suspect, as is his ability to fight going backward.

Then there’s the cut. Fury took 47 stitches over his right eye against Otto Wallin last September. Five months is less than optimal healing time. The longer this fight goes, the greater the chances the cut opens again. So why not press the action? There has been something reckless in Fury’s temperament leading up to this fight, as if he sees it as his homage to his bare-knuckled Gypsy tradition.

“This is a second-round knockout for Tyson Fury,” Lee insists. “You might think it’s reverse psychology, but it’s not. We’re all on the same page.”

“You’re not conning me?”

“No way,” Lee says. “…Traditionally, a Kronk fighter is tall, he jabs and punches through. I don’t want to give too much away, but what they teach in Kronk — Emanuel and SugarHill — is how to set an opponent up. It all comes from good fundamentals and a good grasp of the basics.”

Fury has great fundamentals; he’s a classically trained fighter. But for a single month back in 2010, he has never been known as a Kronk fighter. Until now.

“He’s a bigger man,” Lee counters. “He should be the stronger man. With SugarHill teaching him, he won’t be running and hiding from a fight. What Kronk is, more than a gym or a place, Kronk is an attitude. When I walk in that ring, I’m a bad motherf—er. I’m gonna kill you.“

“I don’t have any problem with [Fury] making it a war,” SugarHill says. “That’s the whole reason I was chosen to be his trainer — to be more technical, to be more aggressive, to have that Kronk attitude, that killer instinct.

Fury says he’ll weigh in about 270, 14 pounds heavier than he was for his last fight with Wilder. It’s not a boxer’s weight.