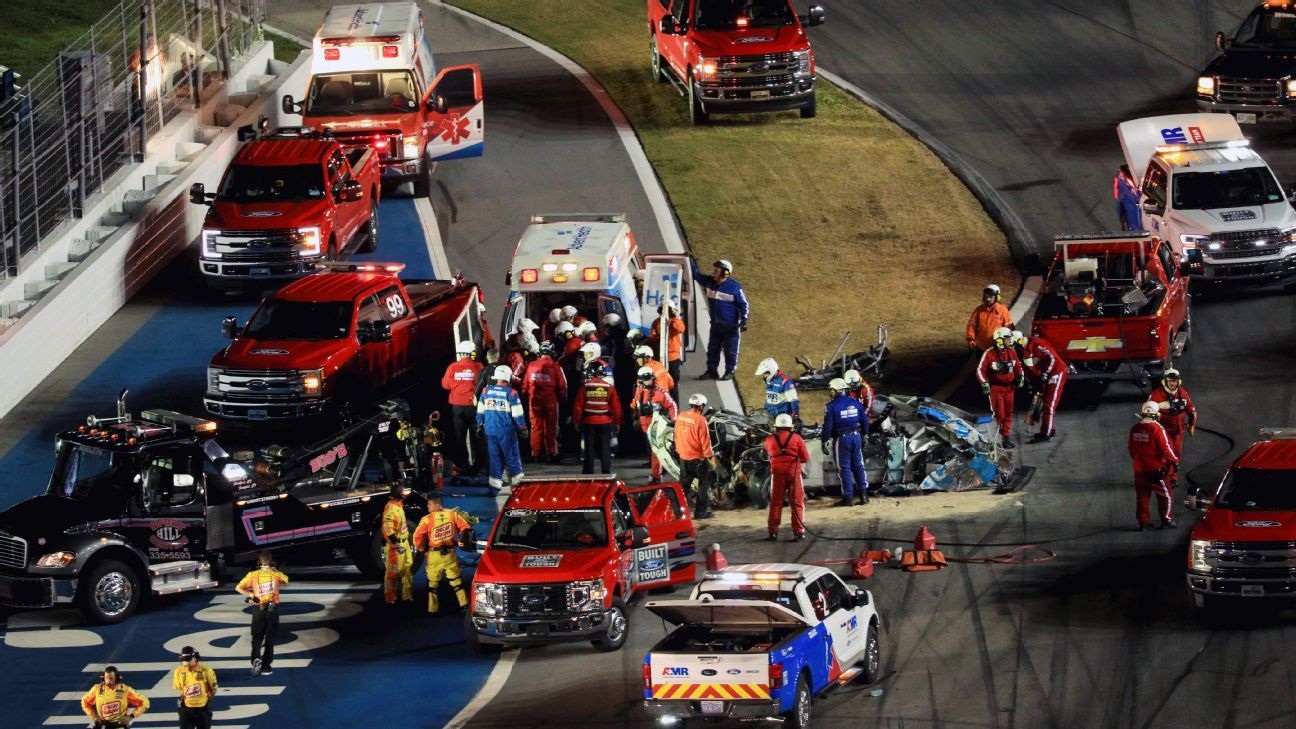 DAYTONA BEACH, Fla. — Ryan Newman was involved in a ghastly crash on the final lap of the Daytona 500 on Monday night, hospitalizing him with non-life-threatening injuries.

NASCAR delivered the news nearly two hours after Newman was extricated from his car, saying he is in serious condition at nearby Halifax Medical Center. The wait for the update was excruciating for fellow NASCAR drivers and fans across auto racing who spent the time wondering how seriously he was hurt.

Safety crews rushed to Newman’s No. 6 Ford and worked to extricate the 42-year-old driver from his seat. The car was on fire as it skidded to a stop and had to be turned onto its tires before they could get him out.

Fox opted not to broadcast Newman’s removal, which was shielded by large black screens put up by track crews.

Ryan Blaney, who locked bumpers with Newman and turned him sideways, sounded crestfallen. Corey LaJoie, who slammed into Newman’s sideways car at full speed, watched a replay and insisted he had no way to avoid the contact. Fox Sports analyst and four-time Cup Series champion Jeff Gordon may have summed it up best.

“Safety’s come a long way in this sport, but sometimes we are reminded that it is a very dangerous sport,” Gordon said quietly as the broadcast came to a close with Newman’s condition still unknown.

Ford Performance Motorsports released a statement Monday saying they were grateful for the news about one of their drivers.

“We had been waiting for information just like everyone else, so to hear some positive news tonight is a relief,” the statement said. “Ryan has been an important part of the Roush Fenway and Ford NASCAR program this past year, and he is so respected for being a great competitor by everyone in the sport. The entire Ford family is sending positive thoughts for his recovery, but our first thoughts remain with his family and his team.”

Breathtaking crashes are common at Daytona International Speedway, where drivers racing for position at 200 mph and in tight quarters often make contact.

Austin Dillon memorably crashed into the catch fence on the final lap of the 2015 July race at Daytona and remarkably walked away unscathed. Dillon’s car went airborne and tore down part of the fence and injured several fans. Dillon’s torn car, with its engine already resting on another part of the track, ended up on its roof and then was smashed into by Brad Keselowski‘s car.

Blaney turned him hard right and into the outside wall. His car immediately flipped and was sliding on its side when LaJoie rammed into it.

“I got a big push there that last coming to the white,” LaJoie said after the race. “I don’t know who was pushing me and I kind of stalled out and I don’t know who hooked Newman. I was hoping he would kind of bounce off the fence to the left, but he didn’t and I hit him … it was some scary stuff. Don’t’ get me wrong. My car was on fire. My seat belts grabbed all sorts of areas, but it was a good day for us. I hope Ryan is OK.”

Denny Hamlin won the race for Joe Gibbs Racing, his second straight victory in the season opener and third in the last five years. The team celebrated near the start-finish line and again when confetti flew in victory lane, prompting Gibbs to later apologize.

“Some people may have saw us and said, ‘Those guys are celebrating when there’s a serious issue going on,'” Gibbs said. “I apologize to everybody. We really didn’t know. We got in the winner’s circle and then that’s when people told us. I wanted to explain that to everyone.

“That’s what makes it so hard. Such a close-knit community, you know everybody. … If you think about all the wrecks that we’ve had over the last how many number of years, some of them have been real serious. We’ve been real fortunate.”

It wasn’t the first flipping crash for Newman at Daytona or at another superspeedway, Talladega. His car went airborne and flipped repeatedly in the 2003 Daytona 500. He landed on his roof in that one and did again at Talladega in 2009.

He’s been a harsh critic of NASCAR’s struggles to keep cars on the ground, even getting fined for public comments the sanctioning body considered negative. In 2010, he said fans shouldn’t even go to the track to see races at Talladega Superspeedway.

The Indiana native, who graduated with an engineering degree from Purdue, said earlier during Speedweeks that he felt renewed in his second year at Roush Fenway Racing.

“It’s all about competitiveness and fun,” he said. “I want to have fun with my life. If I can have fun in this garage doing it and get paid what I feel like I deserve to get paid, then I’m all for it. It’s got to be fun and it’s got be rewarding in more ways than one.

Newman also announced last week he and his wife had split after 16 years of marriage. They have two daughters together and both girls were at his side in the moments before Sunday’s race began, only to be delayed a day by rain.

“I feel just renewed in general, the team, the people, the opportunities, the sponsors,” he said. “All that makes a big difference to me. We’ve got to perform better. Just because we performed better than they had done in the past doesn’t mean it’s up to my standards and my goals.

“I feel like we need to step it up and that’s a big part of me wanting to continue doing what I’m doing.”