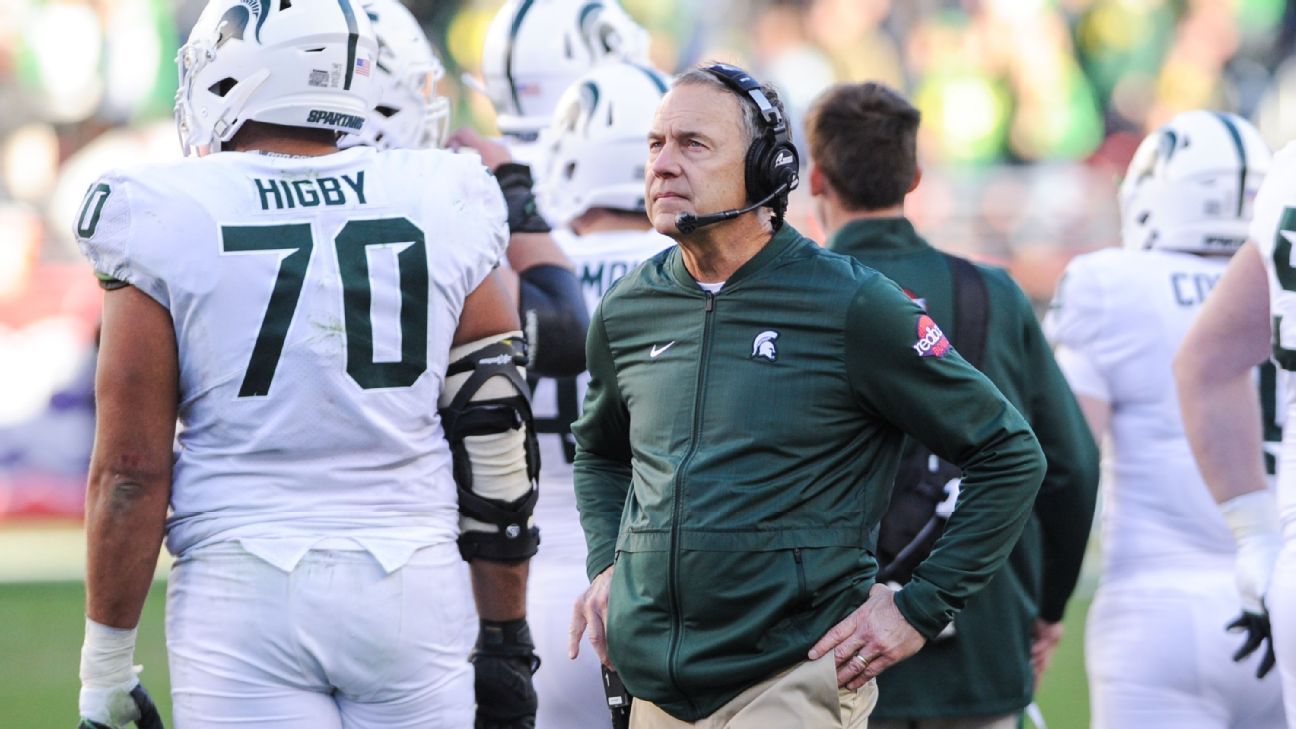 Former Michigan State football recruiting director Curtis Blackwell visited the home of a five-star recruit along with Mark Dantonio and other coaches in 2015, a potential NCAA recruiting violation, according to new information filed Tuesday in an ongoing lawsuit.

The mother of current Notre Dame defensive end Daelin Hayes said in an affidavit that Blackwell attended an in-home visit at their house in Michigan along with former head coach Dantonio and assistant coaches Harlon Barnett and Mike Tressel. LaKeshia Neal, Hayes’ mother, also provided a photo of the coaches and Blackwell on that visit.

The NCAA has reached out to Hayes to ask about the incident, a source said. Per NCAA rules, Blackwell was not allowed to be part of off-campus recruiting during that time at Michigan State because he was not one of the program’s on-field coaches. A Michigan State spokesman confirmed Tuesday that the school is looking into Blackwell’s claims.

“We are aware of the allegations made by Curtis Blackwell as part of his litigation,” athletic department spokesman Matt Larson said in a statement. “As with any allegation concerning NCAA compliance, MSU is investigating and working with the NCAA and Big Ten. We have fully complied with our self-reporting obligations to the NCAA throughout this case.”

Dantonio, who retired earlier this month after 13 seasons at Michigan State, previously denied under oath during a deposition that Blackwell ever attended home visits with recruits during his time at Michigan State.

Blackwell’s attorney, Thomas Warnicke, filed Tuesday’s motion as part of an attempt to depose Dantonio for a second time. Warnicke has argued in court documents that his first deposition session with Dantonio was cut short of the court-allowed amount of time. Warnicke said more allegations are coming soon.

“I intend to file a separate lawsuit in state court in the very near future, which details additional allegations on behalf of my client, Curtis Blackwell,” Warnicke told ESPN.

Blackwell is suing Dantonio and several other former Michigan State employees, including former athletic director Mark Hollis and former university president Lou Anna Simon, in federal court. Blackwell claims he lost his job in 2017 because he was made a scapegoat while the football program dealt with the fallout from a pair of sexual misconduct incidents during the same time that the university was under heavy public scrutiny for its handling of the Larry Nassar scandal. A review of the football-related incidents conducted by a law firm hired by Michigan State said Blackwell was the only Michigan State employee who didn’t follow protocol in handling those situations.

Two weeks ago, Blackwell said in court documents that Dantonio helped arrange a job for the parent of one high-profile recruit and took Blackwell along on an in-home visit to another player’s house. Dantonio retired the following day, saying that Blackwell’s allegations had “zero” influence on the unusual timing of his decision to step down. Asked whether Blackwell was telling the truth, Dantonio said, “I try very hard never to say anything negative about anybody. So, I’ll keep that right where it’s at.”

Michigan State athletic director Bill Beekman said, “to the best of our knowledge, as I understand it, the allegations are patently false.”

Hayes was a five-star defensive prospect from Michigan. He was recruited by several prominent teams. Neal, his mother, said she remembers preparing a large breakfast for the Michigan State contingent when they came to visit her home in December 2015.

“I can say with absolute certainty that Curtis Blackwell was in my home with MSU head football coach Mark Dantonio and the other MSU football coaches during my son’s official recruiting visit on December, 7, 2015,” Neal wrote in an affidavit filed in court Tuesday.

Blackwell, in his lawsuit, has also alleged that Dantonio ignored a pattern of sexual violence — including explicit warnings from his assistants — while recruiting highly touted defensive end Auston Robertson, who was charged with first-degree criminal sexual conduct less than a year after arriving on campus. Robertson is currently serving up to 10 years in prison after pleading guilty to lesser charges. Dantonio refused to answer questions at a recent news conference about Blackwell’s assertion that the head coach ignored advice from others on staff while recruiting Robertson. Dantonio said the school vetted Robertson thoroughly, but he has not answered any questions about that vetting process or Robertson’s recruitment since he was charged.

Another defensive end in the same recruiting class, Josh King, was charged with first-degree criminal sexual conduct during his first year on campus. King later pleaded guilty to lesser charges, along with teammates Donnie Corley and Demetric Vance, and was sentenced to three years probation. Robertson, King, Coley and Vance were all dismissed from the program immediately after they were charged with crimes.