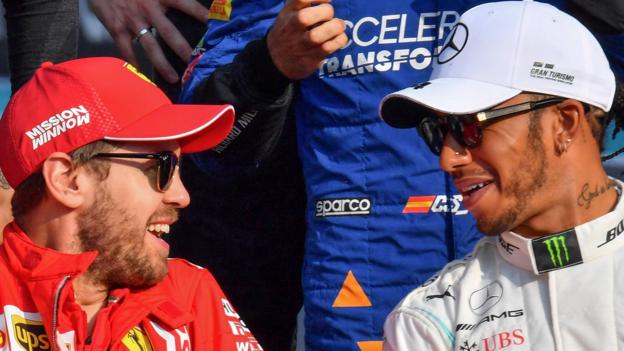 As Formula 1 prepares for a new season, we asked for your questions about what 2020 holds for the drivers, the sport and you…

Ian Bignall: Will the racing be improved this year or will tyre degradation still dominate how drivers manage their race?

The two parts of this question are not necessarily related. It is possible to have good racing and the sort of heat-related tyre management required with the current Pirelli tyres – just look at many races last year. But if you’re asking whether there will be a change this year in the drivers being able to push the tyres much harder than in previous years and drive flat out in races? No. The tyres are the exact same ones used in 2019.

Stephen Burnett: Do you believe F1 is succeeding?

Unquestionably. Television audiences are stable, despite an increasing move to pay TV; its social media reach has grown enormously over the past year; and it remains one of the most popular sports in the world. The racing gets a lot of flak, but there were loads of good grands prix last year, despite Lewis Hamilton’s dominance of the season. There is too big a gap between the top three and the rest, but a budget cap and new rules in 2021 should start to address that.

Shaun Romain: Why does F1 go to so many undemocratic countries with poor human rights records?

The short answer is money. The countries I assume you refer to – Azerbaijan, Bahrain, China, Russia, United Arab Emirates etc – are prepared to pay huge fees for the privilege of hosting a race in the hope of what critics call ‘sport-washing’ their global reputation.

But F1 is hardly alone in this – most major sports hold events in such countries. And in some – like football – the countries own participants, as in the case of Manchester City or Paris St Germain.

Another defence F1 would employ would be to say it is not for them to judge a nation’s politics. And that if it started taking a moral stance, the calendar could be very short indeed. Because even some of the more ‘acceptable’ countries can often be criticised, depending on one’s perspective.

You’re missing out. In Hamilton, you’re watching an all-time great making history. Max Verstappen and Charles Leclerc are two of the brightest talents to emerge in ages. The cars are faster than they’ve ever been. And the racing, despite criticisms, was often terrific in 2019, and should be again this year. Give it another chance.

Derrick Timms: Formula E, Indycar and Nascar all have fantastic racing with tight rules and budgets. How can F1 ever have close racing without similar rules?

I’m not sure I agree with the premise. F1 does have close racing. Look at the Canadian, Austrian, British, German, Hungarian, Belgian, Italian, Singapore, Russian, US and Brazilian Grands Prix last year – that’s more than half last season. Do those other series provide better racing? That’s questionable and depends on your perspective.

If you’re asking about the field spread from front to back, that’s to do with the disparity in budgets, yes. But that’s being addressed with the budget cap from 2021. It may be coming in a bit late, in that the big teams will be able to devote their existing large budgets to their first stab at the new rules (which are, yes, very tight, in your words), but over time it ought to level things out.

Glenn Rawding: Based on the UK decision to ban petrol, diesel and hybrid cars by as early as 2032, where does that leave F1 and the development of race engines?

Good question. The short answer is no-one knows. The slightly longer one – if you ask engine/car manufacturers in F1 – is that, despite legislative plans such as this, there is no agreement as yet as to where road-car technology will go in the future. Electric will be part of it, but there are well established infrastructure issues with that, and already people are talking about other technologies, such as hydrogen fuel cells and synthetic fuels. Most car makers believe small-capacity turbo-hybrid combustion engines will remain relevant in one form or another for a good time to come. One thing you can be sure of though, is that F1 is very aware of this. It recognises the potential threat to its future. And it is determined to stay relevant to road cars.

Will live F1 coverage make it back on to freeview TV in the near future?

Sky has an exclusive contract with F1 until 2023, so until then you’ll get what you have at the moment – only the British Grand Prix live on free-to-air (on Channel 4 for the next three years at least). What F1 decides to do with the next contract is not clear. They have gone different ways in different markets – going full free-to-air in Germany, for example, but doing a UK-style deal in Italy. F1 owner Liberty Media criticised the Sky deal – which was done by Bernie Ecclestone – when they took over and there will be pressure from the teams for greater free-to-air content. But F1 also needs to make money – and Sky is paying mega-bucks. Difficult call.

Hlh 8888: Who are today’s best wet weather drivers in F1 and how do they compare to the past?

Hamilton and Verstappen are the ones that really stand out right now. And you only have to look at some of their drives in the wet – Hamilton at Silverstone in 2008, for example, or both of them at Brazil in 2016 – to know they are every bit as good as the wet-weather legends of the past.

Emma Teachey: We all know F1 is a wildly unpredictable sport, but what are the odds that Verstappen, or even Leclerc, can take the championship from Hamilton?

I can’t give you odds, I’m afraid, but all the top three teams are expecting a closer fight at the front this year. And if the cars are evenly matched, then both Verstappen and Leclerc would be expected to give Hamilton a run for his money. But can either of them beat him and Mercedes over a season if both team and driver remain at the top of their game? That’s a very big ask – Hamilton and Mercedes are both exceptional.

Rohan Dhaliwal: If one Ferrari driver starts much better than the other driver will they be given number one status or will they remain on equal status?

The Ferrari drivers are starting the season with equal status, and within the team they are expecting 2020 to unfold as 2019 did – with Leclerc establishing a small but decisive edge over Sebastian Vettel. The way Ferrari is run, if one driver has a chance of winning a specific race that the other one does not, that person will get priority on the day. Then, as the season comes to a climax, if one is still in the title battle and the other is not, the second driver will be expected to play a supporting role. But not – except in the aforementioned one-off situations – until then.

Max Caine: Is this the last year in F1 for Vettel and what is the likelihood that Daniel Ricciardo will replace him at Ferrari in 2021?

These are two of the biggest questions hanging over F1 heading into 2020. Ferrari said at their launch last week that keeping Vettel was their preference at this stage. The question is whether he will want to stay – especially if Leclerc is beating him again. The problem for Vettel is where else does he go if he doesn’t fancy sticking around? He does not appear to have many options. On the face of it, Ricciardo would be a great replacement for Vettel if he left – and I’m pretty sure the Australian is keen on that idea already – but do Ferrari want to partner Leclerc with another top-line driver, or go for a ‘number one and a half’ like Bottas at Mercedes?

Ted Harrington: What is your prediction for the top three this year?

Tough one. I expect Hamilton to be champion again – he and Mercedes are just so strong. As to who will be second and third, that depends on the quality of the cars produced by Red Bull and Ferrari. I’d just be guessing at this stage. However, if you’re asking me who I think are the top three drivers? That’s Hamilton, Verstappen and Leclerc.

Steve Gabe: Can Williams get back to the top or are their days numbered in F1?

These are dark days for Williams – and for many it’s sad to see such a great name struggling like this. It’s pretty clear already they are expecting another very difficult year in 2020, as you’d expect. Teams don’t recover from seasons like Williams’ in 2019 overnight. They say they are determined to recover. But it’s fair to say that a number of people are worried about their future. The budget cap in 2021 will help, but it’ll likely be a number of years before they’re anything like competitive again.

Russ Williams: Do you think McLaren should have stuck with Honda engines?

You might be surprised by this answer but, no, I don’t. Of course the Honda engine has improved a lot and is now competitive, and of course by giving it up McLaren cost themselves an awful lot of money. But they were so much in denial about their performance as a team that they needed to split from Honda for it to be proven to them just how poor their car’s performance was. Only when they had the same engine as Red Bull did they realise that. So, while it caused them some pain – financial and otherwise – it was the right decision in the long run.

Adrian Llewellyn: Do you think Lance Stroll can make any headway in Racing Point this season, if not will the Strolls leave F1?

Lance Stroll has been in F1 long enough now for his level as a driver to be pretty clear. His father, Lawrence Stroll, doesn’t do interviews, so it is hard to be absolutely sure what his motivation for buying an F1 team was. Many have disparaged it as an expensive way of securing a seat in F1 for his son. But Stroll’s decision to buy into Aston Martin, take over as executive chairman and rename his F1 team after the sportscar maker next year would suggest he’s in it for the long term, whether his son carries on racing or not.

Neil: Do you expect any significant changes in the pecking order this season, given that the 2020 cars are essentially just minor upgrades?

In short, no. There might be a bit of minor shuffling, but Mercedes start the season as the team to beat, only Red Bull and Ferrari are realistic threats, and the midfield will still be a long way behind.

Tony Parkinson: What would be faster, an IndyCar or an F1 car around say Monaco, Spa, and Daytona?

That’s easy – an F1 car. You only have to look at the Circuit of the Americas in Texas to see that. Last year, the F1 pole time at the US Grand Prix was one minute 32.029 seconds. The IndyCar pole in Austin was 1:46.018. That’s 14 seconds faster. Over 3.4 miles. At that speed differential, an F1 car would lap an IndyCar within seven laps. F1 is another world.

No. They get in and drive it as fast as they can. They couldn’t care less about the colour, despite what they might say at launch events to keep sponsors happy. They only care how quick it is.

How the SEC or Big Ten — or both — get two teams in the College Football Playoff
Britton exits for fatigue; Holmes out after injection
Week 5 betting trends: Is Clemson on upset alert?
Best GameDay signs from NC State-Clemson
Week 4 injury updates on Jaire Alexander, Keenan Allen and others