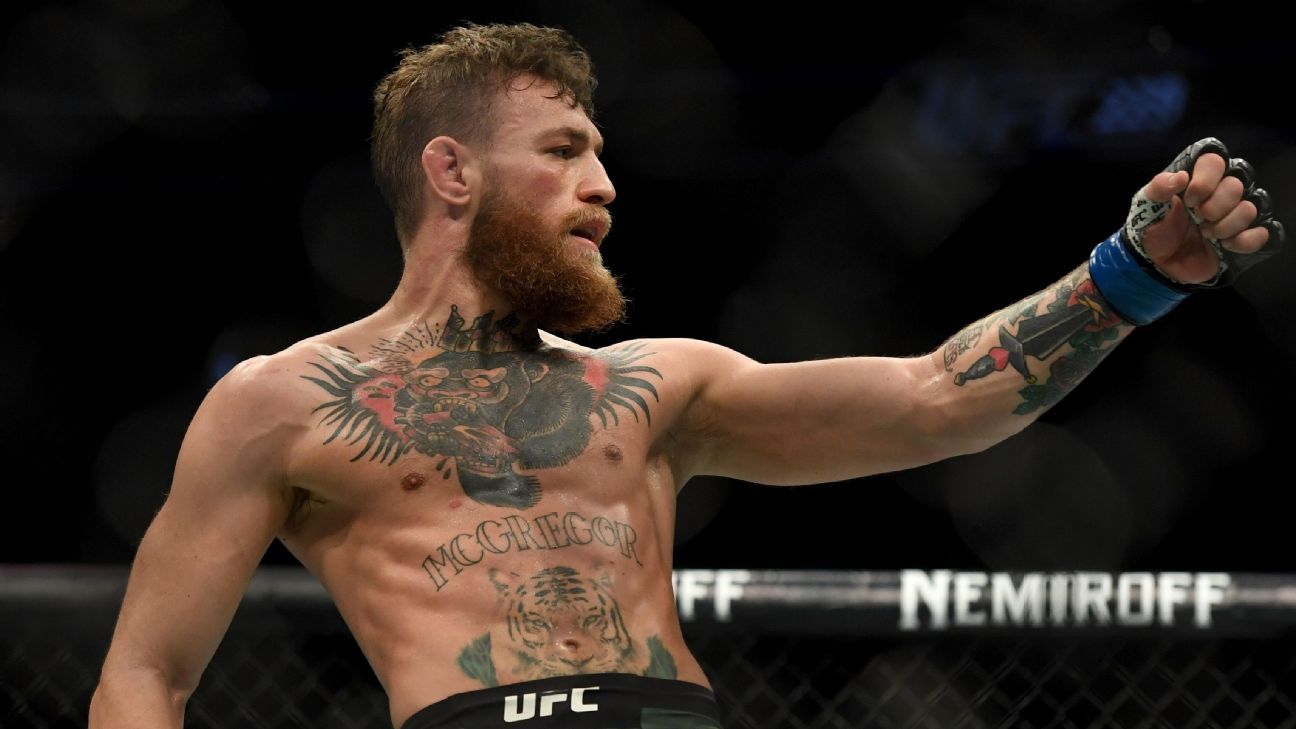 When McGregor tweeted that Saturday night during the UFC Rio Rancho card, I could feel a collective groan from the MMA community.

“Oh, there he goes talking about nonsense fights again,” is what I imagined most people were thinking.

Does he really want to fight Sanchez next? Eh, I doubt it. I mean, I think he would, but no one in their right mind thinks that fight makes any sense.

But I viewed that tweet in a different light.

A little over a month after his victory over Donald Cerrone, McGregor is ready to get back to work. And here’s what I know: There haven’t been any serious talks about his next fight yet, per sources.

Is that weird? Not really. He did just fight, after all.

But when you have the biggest draw in the history of the sport healthy, motivated and ready to go, wouldn’t it behoove all parties involved to start plotting the next move?

Here’s my hunch: The UFC wants to keep McGregor in the bullpen until it is sure Khabib Nurmagomedov vs. Tony Ferguson is actually going to happen on April 18 in Brooklyn, New York.

That’s all well and good, but here’s the problem with that: That fight is in two months, and the only way to be sure it’s going to happen is to actually wait until April 18.

How do I know this? Well, UFC president Dana White has repeatedly said McGregor is next for the winner of that fight, and that if either Ferguson or Nurmagomedov withdraws, McGregor will be the first call.

Meanwhile, McGregor has repeatedly said he wants to fight at least three times this year and wants to be active. Remember, before the Cerrone fight he was talking about taking another fight in March, if all went well, which it did. Of course, that March fight is not going to happen.

I think it would be a big mistake to keep McGregor on ice until April 18. The plan right now should be to get him back in there by May/June. That’s most realistic. And yes, I know there isn’t a domestic pay-per-view currently slated for May or June. I’ve already addressed that. UFC can figure that one out easily by adding another date. McGregor is worth it.

As for who’s next, again, I honestly don’t think McGregor cares. My current sense is Justin Gaethje or Nathan Diaz are the current front-runners, with Gaethje slightly ahead.

But wait, what about Manny Pacquiao?!

In case you missed it last week, McGregor’s management company announced that it is now representing Pacquiao, too. This led to some talk that Pacquiao could be next for McGregor, in a boxing match.

I think most fans were afraid a Pacquiao bout could be next, because they viewed the Floyd Mayweather fight as the beginning of McGregor’s downward spiral. The fans have spoken, and they want to see McGregor focus on MMA.

Is this a really smart business move on Paradigm’s part? Yes. It now represents two of the biggest stars in combat sports, and when the time comes to talk about potentially making that fight, it will represent both sides of the table.

And if Pacquiao vs. Mayweather 2 becomes a thing, Paradigm now represents one half of that equation, too.

But again, McGregor has been clear about his intentions this year: at least three MMA fights. The season. Getting the lightweight title back.

Do I foresee a scenario if McGregor goes 3-0 this year and Pacquiao is still rolling where they try to make that fight this time next year? That’s more probable. But we can worry about that later.

For now, McGregor appears to be in good spirits. He’s back in Ireland training and itching for his second fight of 2020.

Last week, in this column, I wrote this about the Corey Anderson vs. Jan Blachowicz fight:

I believe the pressure is on both fighters to do something more spectacular than what [Dominick] Reyes did last weekend. A decision win isn’t going to cut it. … If either Anderson or Blachowicz scores an impressive knockout on Saturday — sort of like the one Anderson scored against Johnny Walker in November — perhaps the powers that be will think Jones vs. the winner is a sexy fight to make, especially if the fans get excited. A decision won’t produce that kind of buzz.

And wouldn’t you know it, that’s exactly what Blachowicz did.

Now the UFC has a good problem on its hands: run the Reyes rematch right away, or go with the streaking Blachowicz versus Jones.

Two great options, right? So much for the days of Jon Jones getting bored at 205.

Had Saturday night’s main event ended via lackluster decision, this would have been a no-brainer. But Blachowicz made things difficult by looking so darn good in that fight.

It seems pretty clear that Jones prefers a fight against Blachowicz, and that’s his prerogative. Fresh challenges are always more inspiring, particularly when the Reyes fight was as tough as it was.

But if you ask me, the move is to run back the Reyes rematch right away. That’s the bigger fight and the more lucrative fight for all parties involved.

I won’t be mad if Blachowicz gets the nod, because that win was really great, but Reyes deserves the immediate rematch. That’s my final answer.

I suspect the people who are criticizing Diego Sanchez for telling the referee he couldn’t continue fighting after Michel Pereira landed an illegal knee on his head are people who bet on Pereira to win. That’s the only possible explanation I can come up with after seeing people question Sanchez’s heart and motivation.

But the one thing you absolutely cannot question is his heart. That’s just ludicrous. Anyone who chooses to fight in 42 pro MMA fights (31 in the UFC) has earned that right.

What this really speaks to is a broken culture in MMA. In what other sport is the person who was wronged vilified? Pereira deserves all the blame here for throwing an illegal strike while up two rounds to none, not Sanchez.

I know why people are hating on Sanchez. It’s because it’s ultimately his call to continue, despite the obvious illegal infraction. That’s a tough spot to be in. If you continue, despite being dazed and hurt, you run the risk of further injuring yourself because you are unfit to fight. And if you bow out, you’re called a coward.

No other athlete is faced with this dilemma in the heat of battle. But that’s combat sports.

So how about we focus on this: Don’t throw illegal strikes. And if you do, don’t get mad if a professional, who gets only 50% of his pay if he loses, chooses to take the “W” because you messed up.

Sanchez made the right decision. And I would urge every fighter on the planet to do the same.

Who’s more fun than Darren Till right now? … Hard not to feel for Jared Cannonier. He was so close to a title shot, and now he’s likely out for the majority of the year after tearing his pectoral muscle. … Speaking of light heavyweight contenders, Thiago Santos still doesn’t have a timetable set for his return, according to manager Alex Davis. … Goes without saying, but Henry Cejudo vs. Aljamain Sterling is way more interesting to me than Cejudo vs. Jose Aldo. … Sign me up for Dustin Poirier vs. Al Iaquinta. … Tai Tuivasa training at American Kickboxing Academy while still beefing with longtime AKA member Justin Willis (and taking pictures in front of Willis’ poster at the gym) is quite the boss move.

Saturday is going to be a lot of fun.

First, it’s UFC Auckland with the amazing Paul Felder vs. Dan Hooker main event. What’s not to love about this fight? I see no scenario where it’s boring, and I think the winner takes a really big step forward in the crowded lightweight division. I also love that it’s happening in New Zealand, a locale that has become an MMA story in itself over the past year with the rise of City Kickboxing.

And then, when that is over, it’s time for Deontay Wilder vs, Tyson Fury II. If you ask me, this is the most anticipated heavyweight boxing match since Lennox Lewis vs. Mike Tyson 2 in June 2002. This is bigger, even though Lewis and Tyson were more famous. And here’s why:

1. They are both undefeated.

2. It’s a rematch of a classic that ended in a draw.

3. It’s for the lineal heavyweight championship.

It features two great showmen who always seem to deliver. I can’t wait. And I hope fights like this help put an end to the narrative that boxing is dead.

Dare I say, boxing hasn’t been this interesting in over a decade. There are big fights happening every weekend involving big stars.

In short, it’s a great time to be a combat sports fan.

Explaining Juventus mess: What they did wrong and what it means
What’s next for USMNT without sporting director, GM or coach?
Bengals batter Bills, keep ‘proving people wrong’
Panthers choose Reich over Wilks to be new HC
Formula 1 pre-season testing schedule & 2023 car launches