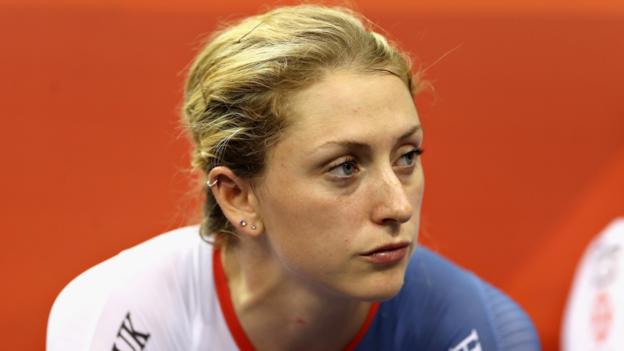 Four-time Olympic champion Laura Kenny chose not to have an operation on a broken shoulder so she can continue her Tokyo 2020 preparations at next week’s Track World Championships.

The Briton, 27, crashed in the tempo race in the omnium at the Track World Cup in Milton, Canada on 26 January.

She said a surgeon told her this year’s Olympics were “pretty much off the cards” because she needed an operation.

“I told him, ‘An operation’s not for me, thanks’,” she told BBC Sport.

“Did I want an operation to get it fixed, but with a two-week delay in me getting back on the bike, or did I want to just see how it goes?

“I decided to see how it goes and the next day I got back on my bike.”

Kenny, who has won back-to-back Olympic gold medals in the women’s team pursuit and omnium, will only race in the omnium and the scratch race at the World Championships in Berlin starting on 26 February.

But she said she still wants to defend her omnium and team pursuit titles in Tokyo, as well as targeting the madison, which returns to the Olympic programme this year.

“I wanted to put my hand up for all three events in Berlin but I can’t physically do the madison and I can’t do a standing start in the team pursuit,” she said.

“That’s slightly frustrating but I never thought I wouldn’t go to the Worlds and I know a lot of people within British Cycling thought I’d lost the plot.

“If I have the form that I had a month ago, I’d like to think I could still get selected for all three events come Tokyo.”

She went on her first training camp without him this year, with husband Jason, a six-time Olympic champion, looking after Albie at home.

“The first two years he came along as I pretty much persuaded Jason to come to everything I went to because I wanted Albie there,” she said.

“I do it for Albie now. I want him and everyone to be able to see that these little hiccups happen but why should they get in the way?