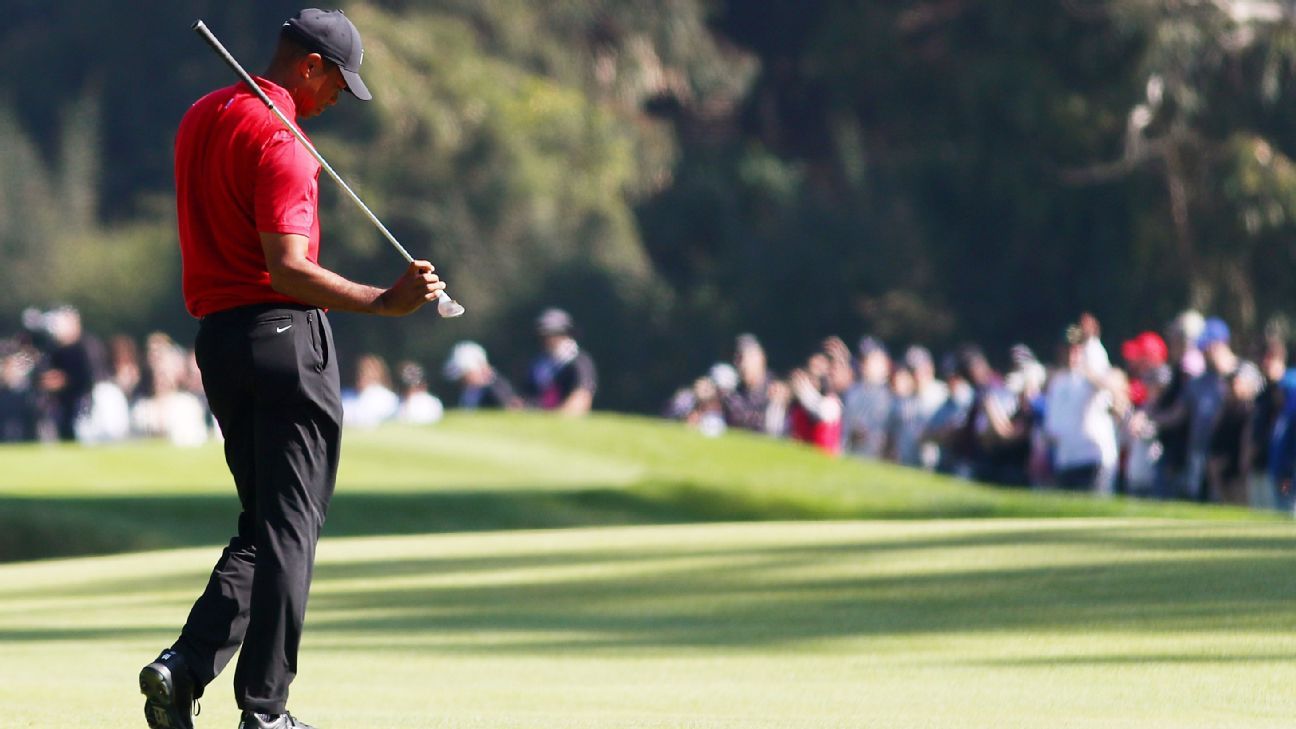 LOS ANGELES — The first-nine 31 Tiger Woods shot on Thursday seems like a long time ago. He struggled to the finish on Sunday at Riviera Country Club, posting a 6-over-par 77 and producing one of the worst 72-hole performances of his career.

Afterward, all he could do was smile, throw in some self-deprecating banter and look to better days.

“I did not do much well today,” he said. “Good news: I hit every ball forward, not backward, a couple sideways. But overall, I’m done.”

Woods, 44, appeared finished on Saturday, when he admitted that back stiffness — the reason he cited for skipping next week’s WGC-Mexico Championship — had plagued him most of the week. Woods said he plans to spend the coming week at home getting rest and then training before worrying about his golf game.

The 295, 11-over-par effort was his worst 72-hole score at the Genesis Invitational and marked just the second time in his career that he finished last among those who made the cut.

Woods was 68th, 22 shots back of Adam Scott. At the 2015 Memorial, Woods shot a third-round 85 — his worst as a pro — and teed off last on Sunday before finishing last in the field, eight shots back of the second-to-last finisher.

His eight over-par holes on Sunday — seven bogeys and a double-bogey — tied for the most in the final round of his career. The only other time he did that was in 2010 at the Bridgestone Invitational, where he closed with six bogeys and two double-bogeys.

“I’ve been in this position many times, unfortunately,” Woods said. “Just keeping fighting hole by hole, shot by shot and try to make some birdies, which I did not do. I made one eagle [at the first, his 10th hole], but that was about it.”

Woods and his caddie, Joe LaCava, both said the golfer grinded through the round, but he struggled with his irons and on the greens. For the day, Woods hit just eight greens in regulation and needed 29 putts, playing his last six holes in 5 over par. For the tournament, Woods made eight birdies and two eagles.

“I was just off. It happens,” he said. “I’m off, and I got a chance to have the week off this week and do a little prep, a little practicing, some training, be at home and all positive things.”

Woods, who won the Zozo Championship in October, finished tied for ninth three weeks ago at the Farmers Insurance Open. This was his third start of the 2019-20 season, and he will drop to No. 9 in the world.

Next up is expected to be two tournaments in Florida, either the Honda Classic or the Arnold Palmer Invitational, followed by the Players Championship. He would then expect to play the WGC-Dell Match Play two weeks prior to his Masters defense.