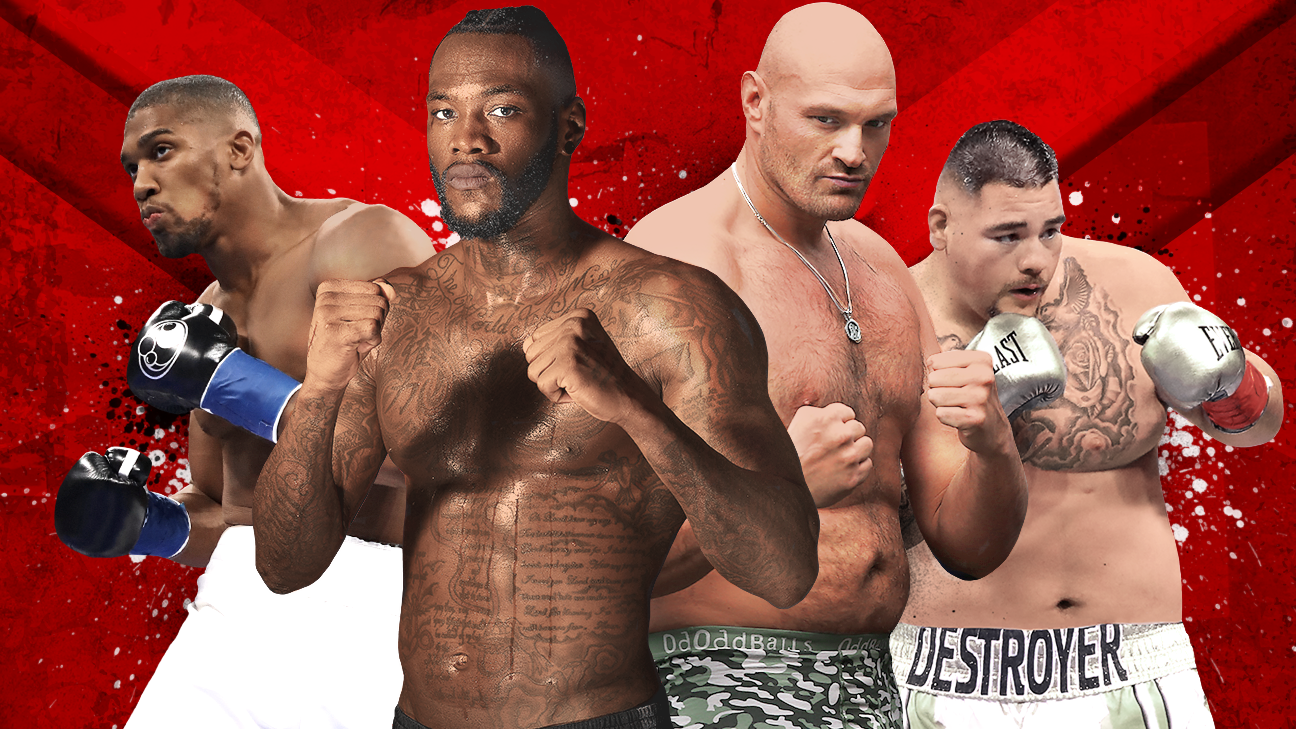 Bob Arum, the chairman of Top Rank who has promoted fights for more than 50 years, went into his best presidential State of the Union vocal imitation.

“The state of the heavyweight division is strong,” he said.

Indeed, boxing’s marquee division is as healthy as it has been in years, with three men seated at the top of the division, all with championship claims.

There is undefeated American slugger Deontay Wilder, who has held a world title since January 2015 and made nine defenses, most by devastating knockout.

There’s England’s Tyson Fury, the undefeated lineal champion and boxing’s feel-good story for his inspirational comeback from drug, alcohol and mental health struggles following a 31-month layoff. A layoff which came right after he upset Wladimir Klitschko in November 2015 to claim the lineal heavyweight championship and three major belts he would eventually either give up or be stripped of.

Finally there’s current three-belt world titleholder Anthony Joshua. The British mega star, who was shockingly upset by Andy Ruiz Jr. in a seventh-round knockout loss in June, reworked his game plan and regained the belts in a masterful one-sided decision in the rematch in December.

“I think the state of the division, if I could put it into one word, is ‘booming,'” Wilder said. “It’s on fire right now. Consider 10 years ago or so it was a back hole, a point in time where nobody talked about the heavyweight division. Now, it’s on fire. It’s so exciting’!”

Fury and Wilder might not agree on much, but they certainly do when it comes to the heavyweights.

“I think the heavyweight division is in a very healthy place at the moment,” Fury said. “There’s plenty of fights to be made and plenty of interesting contests which split people’s opinions. So it’s really exciting times to be a heavyweight at the moment.”

Behind the three kings is an assortment of quality contenders to give the division depth like it has not seen in years, with former titleholders Ruiz, Joseph Parker and Alexander Povetkin, former title challengers Luis “King Kong” Ortiz and Kubrat Pulev, contenders Dillian Whyte, Adam Kownacki and Michael Hunter, and former undisputed cruiserweight champion Oleksandr Usyk (who recently entered the weight class), among others.

Matchroom Boxing promoter Eddie Hearn, who promotes Joshua and several top contenders, said he’d like to see more “contender versus contender” fights, which he already has been arranging, with matches such as Whyte-Parker and Povetkin-Hunter. He also has more of them in the works as Whyte vs. Povetkin and Usyk against former title challenger Dereck Chisora are being planned for this spring.

“One of the great things is the depth, but that depth is relevant if they’re fighting each other,” Hearn said. “That’s important.”

After the contenders come a few fighters who are emerging. Daniel Dubois and 2016 Olympic silver medalist Joe Joyce, who are gambling their perfect records against each other on April 11 in a fight neither man needs, but both want, had breakout 2019 campaigns. 2016 Olympic bronze medalist Filip Hrgovic also has a lot of people excited about his potential.

But to Fury, it’s the champions, then everyone else.

“All the rest of the guys are below us three,” Fury said. “They’re outside the window looking in and they want a piece of what’s going on inside the house. At the moment I’m only concerned about the two fighters who are inside the building with me, and that’s Wilder and Joshua, and I’d like to see them two fight each other, [and] me and [Joshua] fight each other. There are good fights to be made between us three. The rest of the guys want to crash the party.”

“If Fury beats Wilder then it’s a five-minute conversation with Bob Arum and [Fury management company] MTK Global. I know we can make that fight.”

But first let’s go back to May 2019, when it appeared there was not even a road map to the undisputed title fight.

Wilder and Fury had boxed to an entertaining and controversial split draw in December 2018 and both forcefully said they wanted an immediate rematch. Then, with a deal for the fight agreed to, but not signed, Fury shocked everyone by signing a co-promotional deal with Top Rank to fight on ESPN platforms. Suddenly, the rematch was dead, at least for the time being. So too was the prospect of a much-anticipated Joshua-Wilder undisputed title fight, for which there had been rounds of negotiations that had also blown up with each side blaming the other.

It left the three stars going their separate ways, much to the frustration of fans and media alike, with each set to fight over a span of a few weeks in May and June on different broadcast platforms.

But the night before Ruiz shocked Joshua, Wilder stunned everyone when he announced that he and Fury had made a deal to meet in a rematch in early 2020, a surprise given their different promotional and network affiliations, and the headaches that usually causes. But Top Rank and rival Premier Boxing Champions had agreed to work together on a joint pay-per-view between ESPN, where Top Rank has a deal, and Fox, which has one with PBC.

In order to get to the rematch, Wilder and Fury each had to win another fight apiece, while Joshua wanted to get his belts back. In September, Fury survived a grueling fight with the unknown Otto Wallin, winning a unanimous decision, but suffered two horrendous cuts over his right eye that needed 47 stitches to close. Wilder then came through in November when, after losing almost every round of his rematch with Ortiz, detonated a right hand in the seventh round that knocked Ortiz out.

Often in boxing the best plans are sidetracked, but the biggest heavyweight championship fight since Lennox Lewis and Mike Tyson squared off in 2002 is just days away. It will take place Saturday (ESPN-Fox PPV, 9 p.m. ET) at the MGM Grand Garden Arena in Las Vegas.

Wilder and Fury have a two-fight deal, which means there is likely to be a third fight between them later this year. Joshua, meanwhile, could spend 2020 dealing with a pair of mandatory defenses — a probable June bout against Pulev, followed by one against Usyk, who will first need to come through what appears to be a tough test against former title challenger Chisora this spring.

Provided Joshua wins both of his mandatory defenses, there is at least a reasonable chance that the Wilder-Fury survivor could face Joshua in 2021 in what would easily be a nine-figure showdown.

“Whether it’s for the undisputed title, that’s another story because you never know what the organizations will do with mandatories,” Hearn said. “It would be nice if it was the undisputed title. If Fury beats Wilder, then it’s a five-minute conversation with Bob Arum and [Fury management company] MTK Global. I know we can make that fight. Maybe the third fight with Wilder and Fury doesn’t happen [this year] and maybe we can work something out for a Joshua fight. You never know. If it’s Wilder, I don’t know. We tried before. I would try again. But Joshua wants to fight [the Wilder-Fury winner].”

Arum said he is all-in on trying to make an undisputed fight — eventually.

But Arum isn’t so sure it will be Joshua.

“Joshua is no longer a dominant force because he was beaten by Ruiz, who, to be honest about it, is not elite. If Ruiz can beat Joshua, why not Pulev or Usyk?” asked Arum, who used to promote Ruiz and currently co-promotes Pulev. “I have no confidence in Joshua being the belt-holder on the other side next year. I just don’t.”

Arum added that if Fury emerges from the fight with Wilder, he would have no problem making a deal for Fury against whoever has the other belts.

“I don’t have any say over Wilder, but if Fury is the guy standing next year and Pulev is in the other corner, that will make it a lot easier for me to make the fight, but I can make any of the fights,” Arum said. “Eddie is a business guy. I’m a business guy. We can make fights quickly. We’ve made fights before. No ego involved in the negotiations if it’s Joshua or one of his other guys.”

Yes, there’s a long way to go, and a lot of things that must break the right way to get to an undisputed fight, but there is at least this: hope.

Hudson eyes USMNT growth amid leadership void
Reigning winner Tshiebwe among Wooden top 20
Ben Simmons shows flashes of former self against 76ers, but the Nets need consistency
The Celtics have been the one constant in LeBron’s career
Laporte resigns as French rugby president