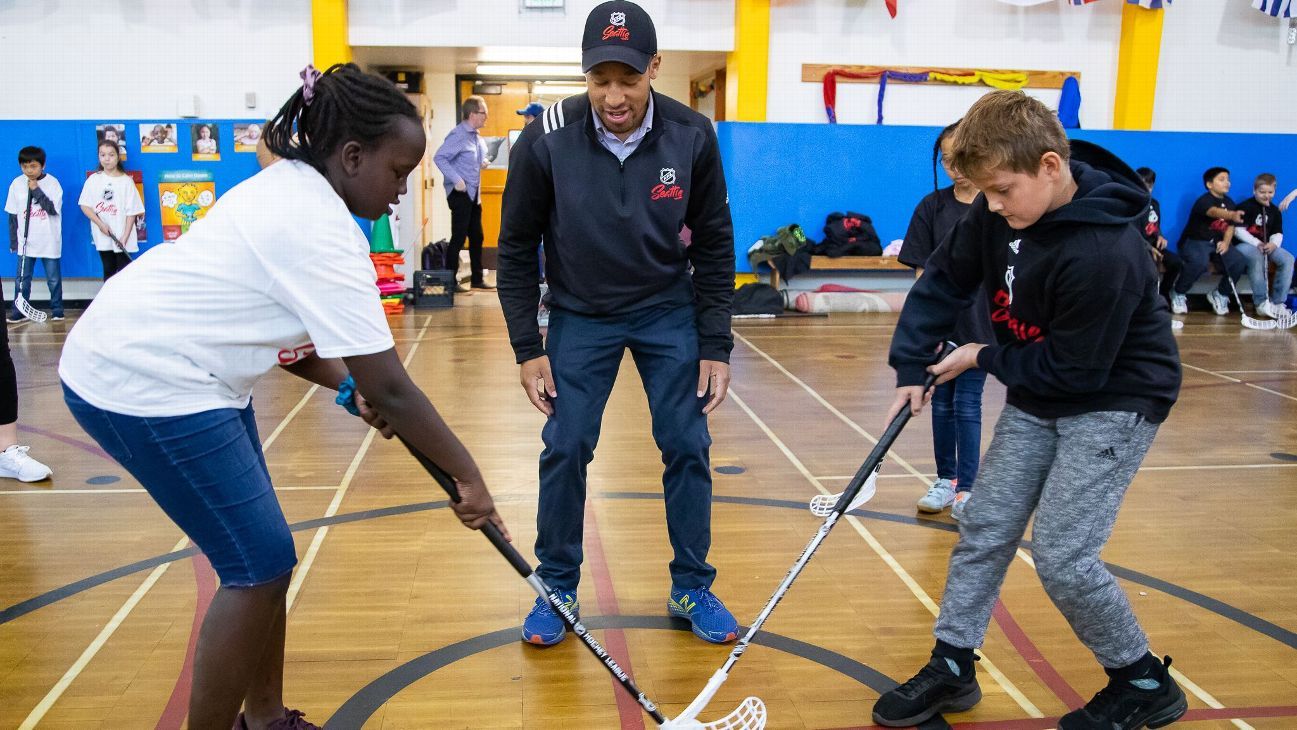 Kyle Boyd was a high school history teacher who had recently relocated to Seattle because his wife got a new job. He grew up playing hockey, and one weekend last year, decided to go skating because he missed it. He drove 45 minutes to a rink in the suburbs for an open skate. The ice was packed with about 100 people, including birthday parties for kids.

“A gentleman came up to me and said, ‘Oh, you’re a really good skater, are you from around here?'” Boyd recalls.

Boyd, 29, explained that he was from Minnesota.

“I know Minnesota well,” the man said. “I actually helped bring the Minnesota Wild there.”

Coincidentally, Boyd’s father, Dr. Joel Boyd, is the team physician for the Minnesota Wild, and was the NHL’s first black team doctor. Boyd kept chatting with the man, who then used a familiar Seattle refrain: “Let’s get coffee.”

Follow our celebration of United States hockey and the 40th anniversary of the Miracle on Ice:
&• Bucci’s top 20 American-born players »
• America’s top hockey hotbeds »
• How Seattle is bringing hockey to all »
&• Watch 30 for 30: Of Miracles and Men »

Boyd agreed and exchanged info. “He seemed nice enough,” Boyd said. “But I had no idea who it was.”

Turns out, the man was Tod Leiweke — president of the incoming Seattle NHL franchise.

Boyd and Leiweke spoke over coffee, which turned into several phone conversations. “He talked a lot about his passion for growing the game, and in particular growing the game in nontraditional hockey communities,” Boyd said. “Places where hockey has not been a fabric of the community or a meaningful part of the culture, and really trying to bring to life a more diverse version of the sport.”

They talked about the barriers and obstacles that hockey can present to nontraditional hockey families. And eventually, when they realized their passions aligned, Leiweke offered Boyd a job. Boyd is now NHL Seattle’s youth and community development and training director. He started in August, after he finished teaching his final summer school session.

Every American city where the NHL has expanded has seen a spike in youth hockey participation. As Seattle prepares to enter the NHL for the 2021-22 season, the franchise is planning for the same. But Seattle has also put a premium on accessibility and introducing the sport to everyone in its diverse community.

“It fits into everything this organization has tried to build so far,” general manager Ron Francis said. “Forty-six percent of our staff is female, 24% of our staff is a different ethnic background. It’s a very diverse and eclectic group already, and that’s the same magic we want to bring into the community as we grow the game. We want to make it inclusive for everybody. If people want to play hockey in Seattle, we’ll find a way to try to help them.”

Seattle is already seeing an uptick in interest. After all, this is a fan base that proved it was starving for a pro franchise. “The NHL asked ownership in Seattle to get 10,000 season ticket deposits in a six-week period, and they did it in 12 minutes,” Francis said. “And you end up with 25,000 in the first hour, and 32,000 in the first day, that tells me there’s a lot of interest.”

According to USA Hockey, there were 4,405 registered players in the state in 2017-18, including 1,744 youth players. By 2018-19, that figure had grown to 2,802 youth players. Sno King, one of the more established hockey associations, reported a spike in the “Late Start” program — where participants older than the typical under-8 group have the opportunity to learn the sport (i.e., high school and adult age).

There are currently no high school varsity programs in Seattle, but that could change.

There has been bustling interest in Seattle — and the area has shown tremendous support for its two junior hockey teams in the WHL — but a barrier has been the unavailability of rinks. There are not enough sheets of ice, and it’s expensive to build in the state (especially in Seattle proper).

As Boyd was exploring the landscape in Seattle, he reached out to people already involved. “They explained to me that a lot of the hockey on the weekends actually takes place in Vancouver, Canada,” Boyd said. “I feel like that is a really big challenge for the families who are trying to have their kids play. The reality of that much travel really limited who could be able to enjoy the game.”

Things should improve. There are currently 13 facilities and 16 sheets of ice in the area. There are five confirmed new sheets of ice coming over the next three years, and USA Hockey projects it could rise to six or seven. NHL Seattle has played a big role in that growth.

One of the new rinks is the team practice facility. It’s a 180,000-square foot, $70 million project that will include three sheets of ice.

“We’re trying to do what’s right, not just for the team, but for the greater Seattle community,” Francis said. “If you put one or two sheets in, that’s more than enough for the team. But they decided to put a third sheet in to hopefully grow youth sports programs, men’s leagues, Paralympic hockey, even our fans and corporations, if they want to come out, we want to be able to help them.”

The team strategically decided to locate it in the Northgate Mall area, in part because of its proximity to a light rail stop. There will be thousands of hours dedicated to public use, which will help meet local demand.

“This is going to be such an amazing opportunity for Seattle, but also for our kids,” Seattle Mayor Jenny Durkan said when the facility was announced. “I learned that in order to host the nationals for hockey, you have to have three sheets of ice. We’re going to have it right here and we’re going to host the girls’ and women’s nationals right here in Seattle. I could see it happening.”

The Seattle NHL team is 18 months away from puck drop — and still doesn’t have a name, or logo — but Boyd has been busy with the groundwork. He understands what works in other markets. After playing high school hockey in Minnesota (which is equivalent to high school football in Texas), Boyd attended Dartmouth. He then worked for Teach For America in St. Louis, and lived in Boston, before settling in Seattle.

One of Boyd’s first projects for Seattle was designing an off-ice hockey curriculum to introduce to schools.

“It’s the newest and safest version of what we know as floor hockey,” Boyd said. “It’s essentially using hockey sticks and a whiffle ball.”

Boyd is piloting the program with partners in Seattle public schools, as well as the Highline Public School District, which is south of the city. “I think what is going to be key is that every kid, no matter where you’re going to school, has some kind of hockey instruction,” Boyd said.

“Seattle is going to grow hockey in the area. That’s going to happen, and it’s going to be fantastic,” Boyd said. “But I think that our team and a lot of the NHL teams, are really starting to be a bit more intentional about growing the game in a more equitable manner and limiting the barriers to entry. People don’t expect hockey to be as diverse as the other major professional sports in America, that’s just a fact. But in 15 to 20 years we want the number to increase considerably, but we really want that number to be representative of the population that lives here in Seattle. We want this sport to be as diverse as the city, as diverse as the region. We want every person, no matter their origin or ZIP code, to feel like hockey is a legitimate option for them.”