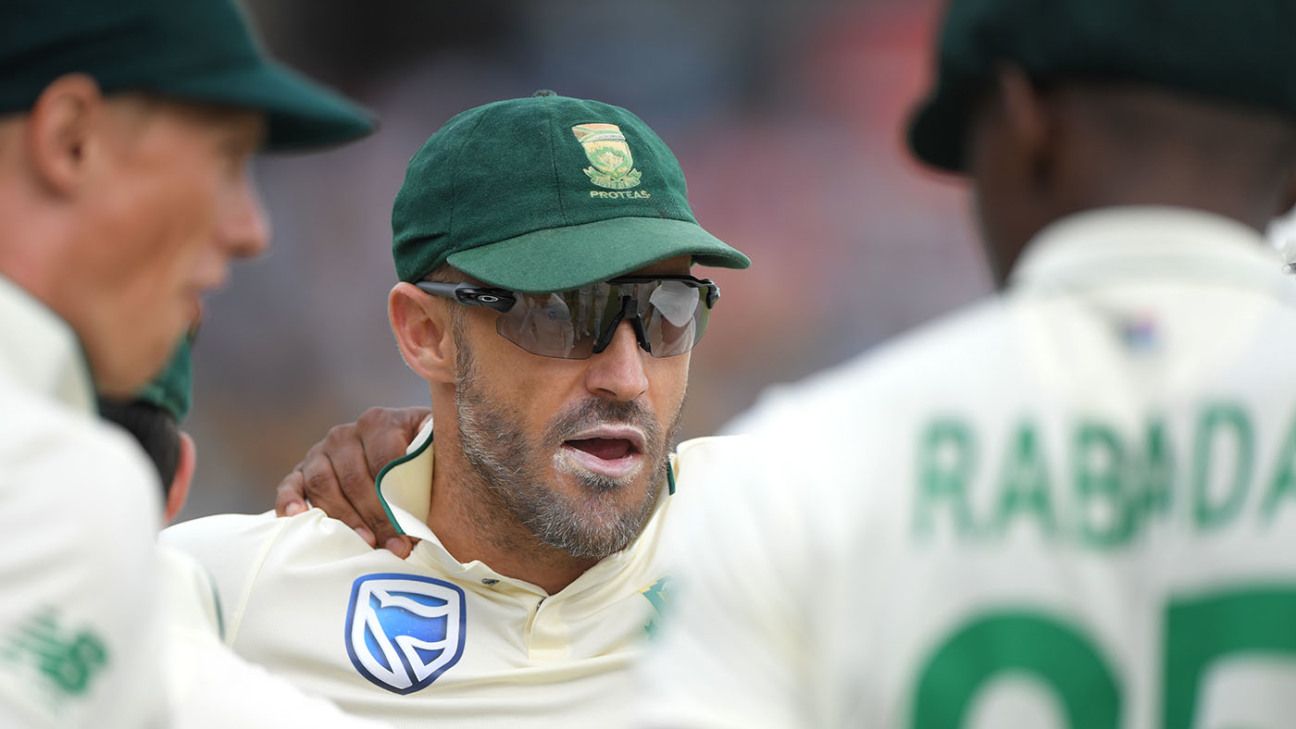 It takes an astute individual to know how much to share with others, especially those they don’t know. Do you tell them about yourself, your hopes, your anxieties and your personal life? Or do you keep those things private and leave them to guess and Google their way around you?

Trust South Africa’s most charismatic captain, Faf du Plessis, to have usually known the answer. (Spoiler alert: it’s a bit of both.)

On debut, during his first press conference as an international player, du Plessis told the story of how his foot slipped out of his boot and he ended up tangled between shoelaces, his batting pads and the urgency of needing to get on to the park to avoid being timed out. He told it to a room full of mostly Australian media during a Test match South Africa were well behind in, and he told it with the refreshing honesty of someone new to the spotlight, who didn’t mind a bit of self-deprecation even if defeat was looming. Then he went on save the game and set South Africa up for a series win and we all wanted to know a little bit more.

It took us four years to really find out.

Du Plessis’ first period at the highest-level coincided with South Africa’s last as the best traveling Test team around. His career began as Jacques Kallis and Graeme Smith’s ended and while AB de Villiers was positioning himself to take over the leadership in all formats. In that time, du Plessis became a reliable presence, sometimes stepping in to skipper the T20 side when de Villiers was being rested and many times stepping in to steady the Test side through his presence in the middle order.

While de Villiers yo-yoed between wanting to be the best batsman in the world to wanting to keep wicket, to having a bad back and not wanting to keep wicket, to wanting to support Hashim Amla as Test captain, to admitting to feeling let down that he wasn’t named captain, to threatening to retire early because of his heavy workload, to taking a sabbatical, du Plessis was there, consistently being consistent. He took on the T20 captaincy when South Africa still treated the format like it didn’t matter and turned it into something that did. Under du Plessis, South Africa talked about T20 strategy more than under any other captain.

He was organised and efficient in the way he led so when de Villiers had to miss a home Test series against New Zealand in 2016, it was not surprising that du Plessis was asked to act as a substitute. At that point, South Africa were in turmoil, although looking back, perhaps that is too strong a word, given what’s happened in recent months.

The 2015 World Cup had ended badly and they lost back-to-back Test series against India and England, which saw them tumble from No. 1 on the Test rankings to No. 7. Dale Steyn, Morne Morkel and Vernon Philander were going through the revolving doors of injury, and a transformation target policy was going to be implemented in a stricter way than ever before. It was not an easy time to take over but du Plessis has always preferred the hard way. He earned his national cap via a Kolpak deal, after all.

The series itself was unremarkable. A wet Durban outfield meant that the Centurion Test was a straight shootout and South Africa won easily. Du Plessis scored a century and something about the way he conducted himself made it clear that he was a better candidate to captain than de Villiers.

“Du Plessis mentioned a ‘perfect world’ in which he would lead the Test team for the rest of the season and also at the T20 World Cup, which suggests it was not entirely his decision to step down”

Fortuitously, de Villiers had not recovered from an elbow problem in time for the series in Australia three months later so du Plessis carried on, and how. That tour was his most memorable, as he absorbed the pressure of losing Steyn to a broken shoulder on the second day in Perth and the scrutiny of being caught with a mint in his mouth in Hobart. His hundred under lights in Adelaide turned boos into cheers and South Africa won a third, successive series Down Under.

By the end of the year, de Villiers gave du Plessis his blessing to keep captaining and we all knew the most important thing about him: he had the team.

South Africa played for du Plessis and he played for them. Their performances in Australia in 2016 and against Australia and India in the summer of 2017-18 are the best proof of that. Du Plessis led with dignity, especially when the Australia camp imploded in the aftermath of sandpaper gate, and South Africa’s back-to-back series wins put them back on the track du Plessis wanted them on. He mentioned the No. 1 ranking often and it was doubtless a goal of his, but lack of resources let him down.

Series defeats to Sri Lanka, away in 2018 and at home in 2019, blighted his Test captaincy record but nothing would have stung as much what happened from the World Cup onwards, on and off the field.

South Africa’s worst showing at the 50-over flagship was marred by selection controversy when de Villiers made himself available but was refused a comeback, and followed by administrative unraveling.

It was then that du Plessis’ leadership was taken to its edge. It was then that it would have been easy and obvious to walk away. Du Plessis is understood to have had offers but turned them down because he felt a sense of duty to a team in transition. When Amla and Steyn retired, his own role only became bigger, as the last link to the golden generation and the only one brave enough to go back to India.

Despite not being consulted about the team director and being left out of the T20 squad, du Plessis ploughed through a three-Test series that got worse as it went on. The wounds from 2015 were reopened and South Africa were exposed as being more than just a team in transition; they were a team on the brink of falling apart. Again, it would have been easy for du Plessis to walk away but duty brought him back home to try again. And he started by sharing.

Du Plessis appealed, publicly and on multiple occasions, to CSA to clean house and provide clarity as it lurched through crisis after crisis. He went unheard, and it took sponsor withdrawal, board resignations and a hard-handed attempt at censorship to force a change at head office. Before that happened, du Plessis had already turned to humour.

He created a social media storm as captain of the Paarl Rocks, when he revealed a little too much about why fast-bowler Hardus Viljoen was not available for selection. “He is in bed with my sister,” du Plessis said, straight-faced, explaining that Viljoen had married his sibling the night before. And that was where the fun ended.

The Mzansi Super League final, which du Plessis’ team won, may have been the last time we saw him truly celebrate and be celebrated as a captain. While the two candidates being trialled as his replacement, Quinton de Kock and Temba Bavuma, led teams that finished last and second-last in the tournament, du Plessis took a team of nobodies to the title. That was the strongest statement he could have made that he was the man to take the national team to this year’s T20 World Cup, something he maintained he wanted to do all summer and seems to still want to do.

In his statement on Monday, du Plessis mentioned a “perfect world” in which he would like to lead the team in Tests for the rest of the season and also to the T20 World Cup, which suggests it was not entirely his decision to step down. So who or what might have pushed him?

The evidence points to a perfect storm of loss of form, public and media pressure and politics, none of which are entirely his fault.

In an increasingly racially polarised climate, du Plessis found himself swept up in sentiment following the dropping of Bavuma from the Test side. While no one could argue with du Plessis’ logic that Bavuma, who averaged 19.4 in 2019, needed to force his way back in through “weight of runs”, du Plessis’ comment about the team “not seeing colour” was in poor taste for a country that sees little else. It is not for du Plessis to answer why the South African system has only produced one Test-ready black African batsman but it was his job to discuss transformation in more nuanced terms. He got that wrong, but it should not have cost him his captaincy. In all likelihood, it didn’t.

Towards the end of the Test series, as du Plessis maintained his stance that he wanted to continue until the T20 World Cup, acting director of cricket Graeme Smith said he would have a “robust” discussion with du Plessis to discuss his future. Those talks are believed to have happened at length. Ultimately, the decision was taken fresh ideas were needed as South Africa enter a new era. De Kock will inject new energy into the white-ball teams and the Test captaincy successor will be named in the winter. But du Plessis remains duty-bound.

He has not given up the international game and is willing to share more of himself with a commitment to playing in all formats, mentoring the next generation and making it to that T20 World Cup. In all that, du Plessis has shared more than just his batting and leadership skills with South African cricket. He has shared his character, his compassion and the best years of his career and for that, this country should always be grateful.