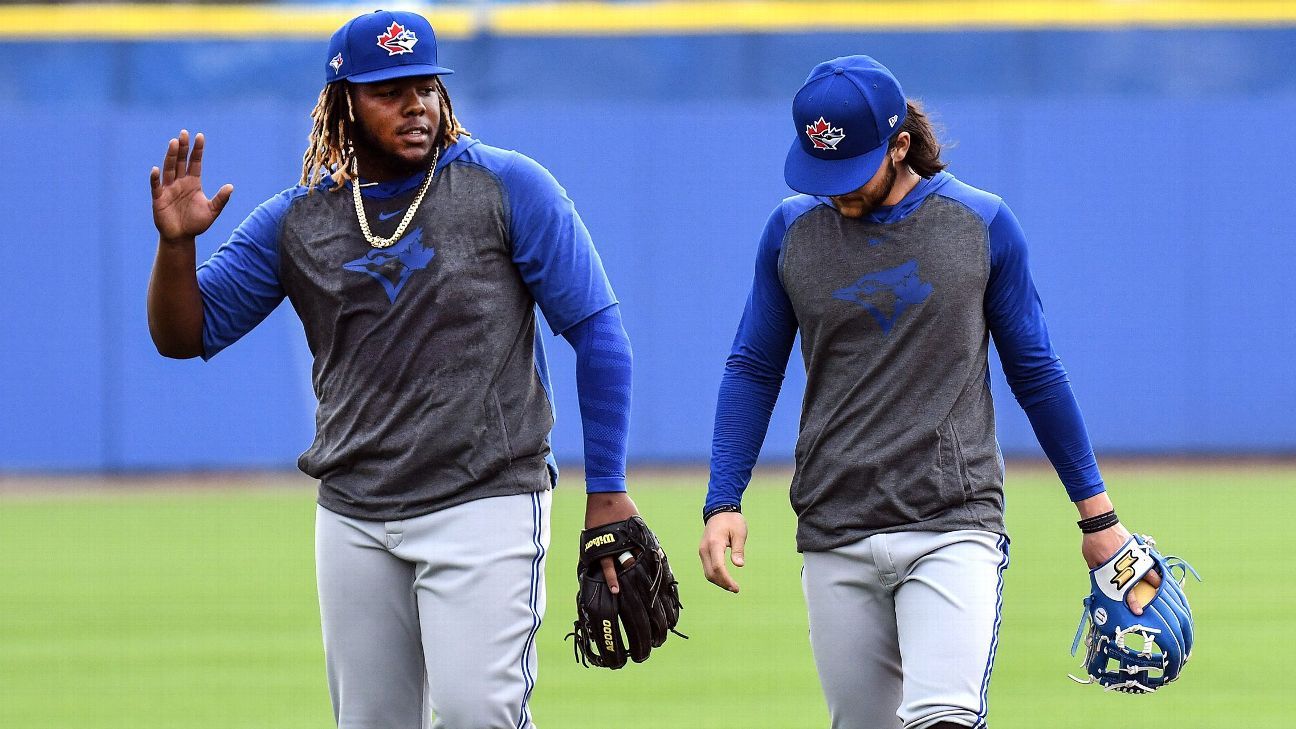 DUNEDIN, Fla. — Coming up through the Toronto Blue Jays farm system together, spending hours upon hours with each other in Lansing, Dunedin, New Hampshire and Buffalo, the trio of famous baseball sons — Bo Bichette, Cavan Biggio and Vladimir Guerrero Jr. — started assembling a vision for the shared future of baseball in Toronto.

After the infamous bat flip from Jose Bautista in the 2015 AL Division Series put an exclamation point on a previous era of Major League Baseball in Canada, Blue Jays baseball turned the page following the introduction of Mark Shapiro as team president in 2016. As they began rising up through the minor leagues together, Biggio, Bichette and Guerrero quickly recognized their value. They spent three years together, climbing the minor league ladder, and just a quick glance around the minor league clubhouse unveiled the puzzle pieces for the future of the Blue Jays.

“I don’t think we ever really talked about it directly, but we were obviously trying to get better as individual players and work our way up to the big leagues,” Biggio told ESPN. “I think we all saw a vision of that when we started playing every level together, and then slowly moving on up. You see the writing on the wall. There was a level of excitement in our work and wanting to get better, and just trying to win baseball games. It wasn’t any direct conversations, but there’s definitely some excitement.”

The sense of optimism at Blue Jays spring training this year is palpable, even if the pundits don’t expect the team to compete for as much as a wild-card spot. At this point in 2019, the majority of preseason buzz around the Blue Jays centered around the incoming debut of Guerrero, one of the most-hyped prospects in baseball history, creating a circus only recently matched by Bryce Harper.

“I wouldn’t say pressure,” Guerrero said when asked if he feels any pressure after 2019. “I really feel a lot more comfortable now with them and the chemistry is very good. We’ve all been working hard as a team, so I’m OK with that now.”

The trio of Guerrero, Biggio and Bichette represents the future of the Blue Jays, a young group that faces extra scrutiny as the sons of two Hall of Famers — Vladimir Guerrero Sr. and Craig Biggio — and a four-time All-Star and Silver Slugger winner in Dante Bichette. Biggio, who was drafted in the fifth round by Toronto in 2016, watched the core of Josh Donaldson, Bautista, Edwin Encarnacion and Marcus Stroman leave the franchise following the team’s last playoff appearance in 2016 and recognized the opportunity available for the next generation of players.

“When the turnover happened, where all of those players moved on to other teams and we’re coming up, I think it’s really exciting to see when I first got drafted, to see what it will be like when we are good, and then go through the lows and now we’re trying to build it back up,” Biggio said. “It’s cool to see the highs, and then you have to work the process, and now you’re trying to work your way to get back up there.”

This spring training marks the first time Toronto’s three young players have entered camp knowing their spots on the roster are safe. They do not need to extend themselves beyond what’s necessary to impress coaches and teammates.

“Last spring training, I felt like I was in-season because I was trying to impress people,” Bichette said. “This spring, it’ll be a happy medium of playing hard, but also not wasting too much energy.”

“Each one of us has worked very hard to get to this moment, but now we work differently,” Guerrero told ESPN’s Marly Rivera. “You are no longer trying to ‘make the team.’ You’re trying to improve. You don’t feel like you have to show anyone anything. You don’t take 50, 60 ground balls just to take grounders. You focus on a specific sequence or you just work hard on all the things you want to improve upon.”

Of the group, Guerrero made his major league debut first, coming up at the end of April. Then came Biggio, who made his debut in mid-May before the Blue Jays finally called up Bichette in July to reunite the trio at the major league level, creating a sense of normalcy for Biggio.

“It just made life easier, especially for me coming up last and being able to go up there and have comfortability, and not acting like I’m walking on eggshells, making sure that I’m not making anybody mad,” Biggio said. “I’ve got guys, not just them, that I’ve played with for a few years, so I think it made it a little bit easier of a transition for us.”

The elder Bichette — who played from 1988 to 2001 with the Angels, Brewers, Rockies, Reds and Red Sox — is helping out at Blue Jays camp as a special instructor, allowing him to work with his son every day. Bichette said that the trio of baseball sons coming up together helped all three adjust to life as a pro.

“I think it’s been good for all of them because they’ve all had a similar life,” Dante said. “They can relate and know what each other has been through. It’s good because that’s helped them because their dads have told them the pitfalls of this game and how to mentally handle it more than physically. They have the physical talents and deal with that, but the mind usually comes a little bit later with players, and they had their families’ help with that.”

Walking into the Blue Jays clubhouse, it’s undeniable whom the future revolves around. A team calendar on the wall features big images of Bichette and Biggio. Despite his youth, Guerrero is already one of baseball’s most famous stars after his eye-opening performance at the Home Run Derby last year in Cleveland, delivered on top of all of the preseason hype. Given the relative dearth of veteran leadership in the Blue Jays clubhouse, some of those responsibilities already are falling onto the shoulders of Bichette, Guerrero and Biggio.

“You feel more of a sense of responsibility, especially toward the new players that we have on the team now,” Guerrero said. “That is part of your job now, too, to be a great teammate and keep everyone on the same page.”

Bichette, who has a more reserved personality, said that he hopes to lead by example.

“My goal, I don’t come out here trying to be a leader. I think that gets you in trouble a bit, trying to keep people in line,” Bichette said. “For me, I think being around good players, most of the good leaders work hard and prepare well. They work hard, they’re always on top of things and they lead by example. I think if you talk too much or hold people accountable too much, your words will come on deaf ears. For me, it’s about handling myself the right way, like a professional, and if people want to look to me as a leader, that’s fine, but that’s not necessarily my goal.”

The elder Bichette said the payoff of riding the bus in the minor leagues together is already evident in the team’s laid-back clubhouse.

“One of the first things you learn in professional baseball is how to get along with people because you become 24/7 with guys almost immediately,” Dante said. “You’re thrown off the once-a-week baseball to every day, you’re living with these guys. It takes a while to learn that, to learn how to deal with people every day whether their personalities work for you or not. For these guys to have overcome that hump together, they know how to deal with each other.”

Despite tempered expectations, the young Jays are optimistic about the season that lies ahead. The high-powered Yankees are the favorites to take the AL East, while the Rays and Red Sox will factor into the wild-card race. Bichette said he expects Toronto to keep up, especially following the addition of Hyun-Jin Ryu to headline the rotation. FanGraphs projects the Blue Jays to finish in the bottom third of the league with the likes of the Texas Rangers, Colorado Rockies, San Francisco Giants and Pittsburgh Pirates.

“I expect us to compete. I expect us to do really well,” Bichette said. “We’ve got a lot more talent than people realize. I don’t think people are really taking into account that some of our guys are going to take steps forward and become really impact players.”

Blue Jays manager Charlie Montoyo heaped praise on the younger Bichette, who provided a spark in Toronto during the second half of 2019 while replacing Freddy Galvis, the slick-fielding, light-hitting infielder who started 115 games at shortstop for Toronto before Bichette’s debut.

“There’s no way to do any better than what he did. We had a funny conversation there at the end when we were talking to all of the players about their offseason plans, and he was the one where we told him to do the same thing that he did last year,” Montoyo said. “Just work on your defense and your hitting. Don’t change anything because nobody can play as good as he did.

“The funny thing is that with Galvis, you remember how good he was? We thought we were going to miss him because he’s really good, and then all of a sudden, Bo shows up and makes all of those plays so we forgot about Freddy. That’s a big compliment, that we forgot about Freddy that quick.”

Much of the discussion in the opening days of camp centered around the improvements Guerrero is hoping to make next season. Despite his reputation as a hitter with enormous power, the Blue Jays believed that Guerrero hit the ball into the ground too often, with nearly half of his batted balls on the ground in 2019.

Guerrero, who spent most of the offseason working out in Florida, will also continue getting defensive reps at third base while factoring in as a designated hitter as well. Montoyo also did not rule out the possibility of Guerrero sliding across the diamond to play some first base.

“I’m never going to say no,” Montoyo said. “But I know if he ever goes to first base, he’s got good hands. Right now, he’s our third baseman, but he had a great offseason.”

If the Blue Jays hope to exceed expectations and make a dent in the always-competitive AL East, they’ll need Bichette, Biggio and Guerrero to make waves this season. Having spent 14 years in the major leagues in his own right, the elder Bichette hopes to see all those days spent together by Toronto’s second-generation big-leaguers pay off in a big way.

“It’s big when you can come up with dreams instead of trying to hang on or be put together in the last minute,” Dante said. “They’ve all got dreams, talked about their dreams together, and here they are trying to chase them.”