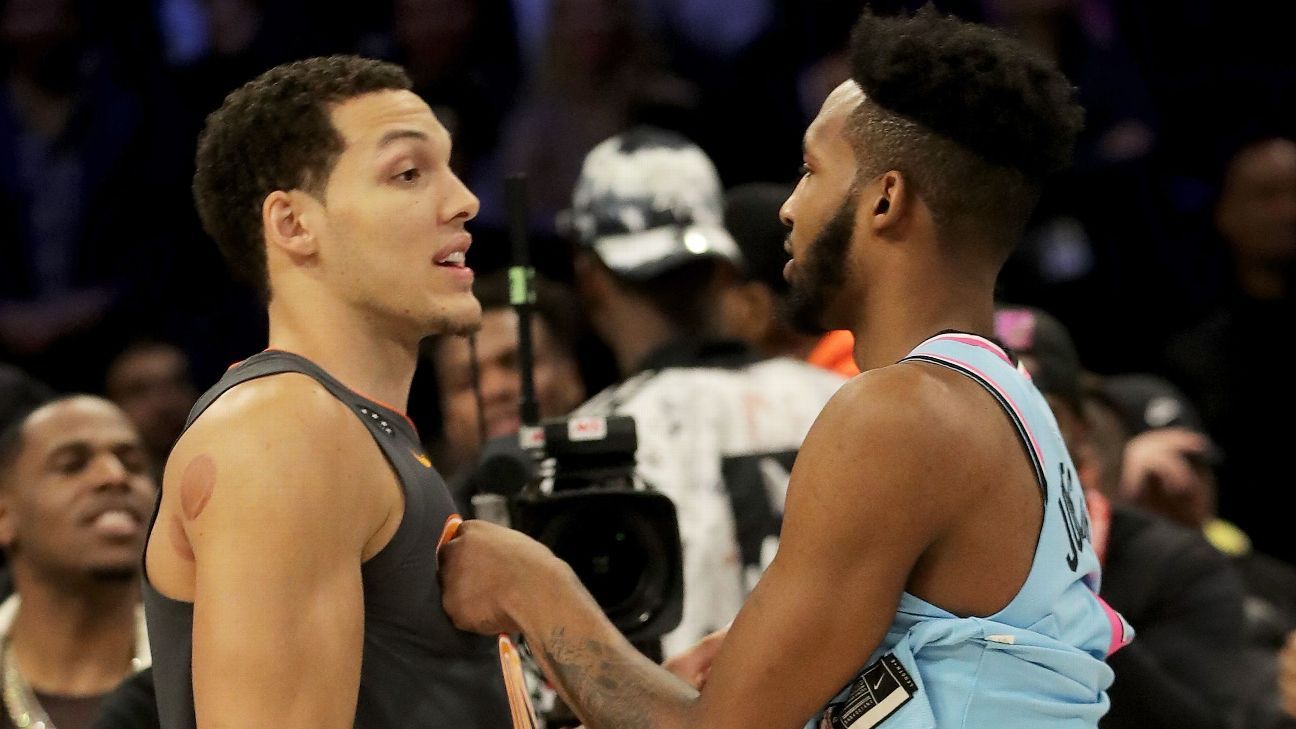 The 2020 NBA All-Star Slam Dunk contest at the United Center in Chicago already had the potential to be memorable Saturday night.

2008 winner Dwight Howard was returning! Pat Connaughton was participating for the first time! Derrick Jones Jr. was back after coming in second back in 2017! And Aaron Gordon was ready after narrowly missing out on the crown in 2016!

Howard and Connaughton earned one 50 each, but neither made it to the final. That stage was reserved for Jones and Gordon.

Orlando Magic forward Gordon was particularly impressive, scoring 50s with his first five dunks of the night. The Miami Heat‘s Jones earned two 50s in the championship round along with Gordon, forcing a special dunk-off round. That’s where things took a turn.

After Jones and Gordon each scored 50 with their opening dunks of the extra round, Jones took off from just inside the free throw line with a windmill. The judging panel that included Dwyane Wade, Candace Parker, Common, Chadwick Boseman and Scottie Pippen gave Jones a 48.

Gordon then brought out Boston Celtics two-way contract center Tacko Fall, completing a dunk over the 7-foot-5 big man. But to the horror of all (outside of Miami), the judges gave Gordon a 47, awarding Jones the victory.

Outrage ensued — particularly because Gordon watched Zach LaVine edge him out in a similarly extended 2016 contest. We haven’t seen folks this upset at an all-star exhibition since that baseball game that ended in a tie:

2 🏆 should have been rewarded tonight that’s for damn sure!! Keep it a buck y’all. 🤦🏾‍♂️!! Them boys both put on a show! Professional DUNKERS

Tacko Fall says that Aaron Gordon dunk was not planned. “I was scared for my life”

Just spoke to dunk contest judge @common who tells @ESPN, “We thought it was going to be tied. We were like, ‘This is a tie’ …But somebody didn’t do it right. I don’t know who it is.” 👀👀👀

The right guy won…. Kenny wasn’t behind the judges table….

Dunk contest judge ⁦@Candace_Parker⁩ just posted this on IG. She confirmed ⁦@common⁩ account of the judges’ intending for it to be a tie (and go to judge’s choice) to ESPN pic.twitter.com/RHqFekEYhu

Dunk contest judge @Candace_Parker -who gave Aaron Gordon a 10-tells ESPN, “I ain’t throwing anyone under the bus …. buttttt check the score card.”

One of the craziest dunk contest I’ve ever seen!!! @TheRea1DJones and @Double0AG did there thing!!! They both should’ve just won real talk 💯💯💯

That was legendary… but damn they did Aaron wrong again🤦🏽‍♂️

Can’t have the dunk contest be at the level, then end it like that smh….

How can you single handedly have 3 of the top 10 dunks ever completed in the #NBADunkContest and never have been a champ? 🧐😒 @Double0AG #robbery

I feel sick for AG man. You re the people champ bro @Double0AG !!!❤️❤️

The crowd’s reaction when they found out AG lost. pic.twitter.com/cIJGHNhZhj

Naturally, Gordon was upset as well — so upset that he said he’s done with dunking for us all on All-Star Saturday Nights.

If Gordon does return to dunking, Jones did say he’s open to a rematch … but that might be a tough sell after Gordon’s three losses in the competition.

Interviewed Derrick Jones Jr for @SportsCenter – he said if Aaron Gordon thinks he should have won, he’s welcome to come back for a rematch next year. 👀

“Whoever want to step out in front of me, I’m there. I’m not going to shy away from nobody.”

Best bets and expert picks for UFC Fight Night and Bellator 286
QB Pickett replaces Trubisky in Steelers’ defeat
The key storylines for NC State-Clemson, Alabama-Arkansas and the rest of Week 5’s biggest games
Chargers WR Allen (hamstring) ruled out again
USWNT vs. England: Who needs to step up? Is this the next big rivalry? Who wins?