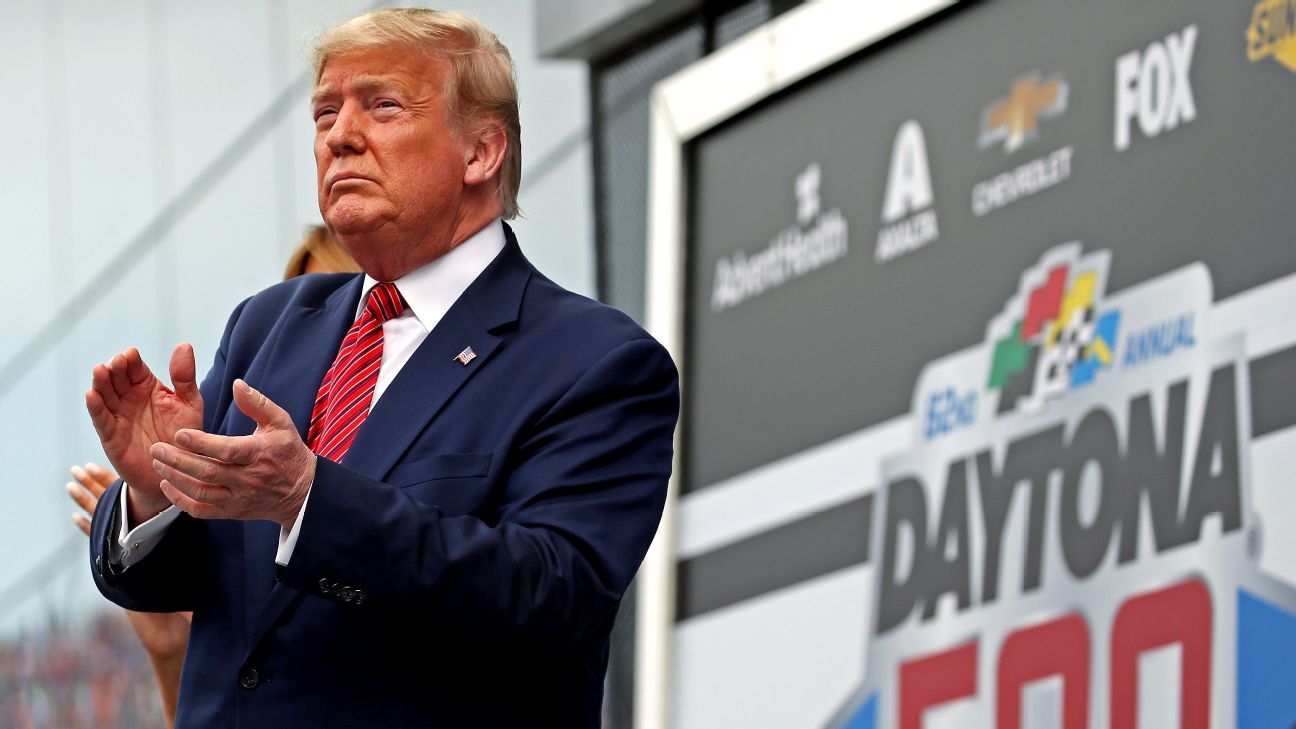 DAYTONA BEACH, Fla. — President Donald Trump gave an election-year embrace to NASCAR and its fans Sunday when he became the second president ever to attend the Daytona 500. The presidential motorcade took to the track to join in a warm-up lap after he had told the crowd that the racers and their teams were competing “for pure American glory.”

After a recitation of the opening command, “Gentlemen, start your engines,” Trump got into his black limousine for a ceremonial spin around Daytona International Speedway. He had joked moments earlier in a Fox interview that, while president, he was not allowed to drive his own car, so “I’m going to hop into one of these cars and I’m going to get into this race if possible. I love the idea.”

Given the honor of grand marshal for the race, Trump gave thousands of fans a flyover of Air Force One and then rode onto the track in the presidential motorcade as the audience roared with delight. The motorcade took roughly a quarter lap before pulling aside in an infield staging area.

Asked what it was about NASCAR that he most enjoyed, the president said, “I think it’s really the bravery of these people. … it takes great courage.”

President George W. Bush appeared at the race during his reelection year.

He said the Daytona 500 was “a legendary display of roaring engines, soaring spirits and the American skill, speed and power that we’ve been hearing about for so many years. The tens of thousands of patriots here today have come for the fast cars and the world-class motorsports. But NASCAR fans never forget that no matter who wins the race, what matters most is God, family and country.”

Trump’s reelection campaign planned to run an ad during the Fox broadcast of the race and fly an aerial banner near the speedway. About 100,000 people were expected to attend this year’s race while millions more watched on television. About 9 million people took in last year’s race on television.

Getting ready to go to the Daytona 500. Will be GREAT!

The start of the race was delayed by 50 minutes because of rain that moved into the area moments after Trump and his motorcade finished their ceremonial lap.

Trump’s limousine exited Daytona International Speedway, and the skies opened for a brief shower that forced drivers back to pit road.

The start already had been pushed back 13 minutes to accommodate Trump’s trip.

After his scheduled return Sunday evening to Washington, Trump will embark later this week on a Western state swing that will take him to rallies in Phoenix, Las Vegas and Colorado Springs, Colorado.

The president’s visit was widely welcomed by NASCAR fans. Trump 2020 flags flooded the infield, and some fans wore them as capes in the garage area.

At least a dozen drivers were escorted from the prerace meeting to a private meeting with Trump.