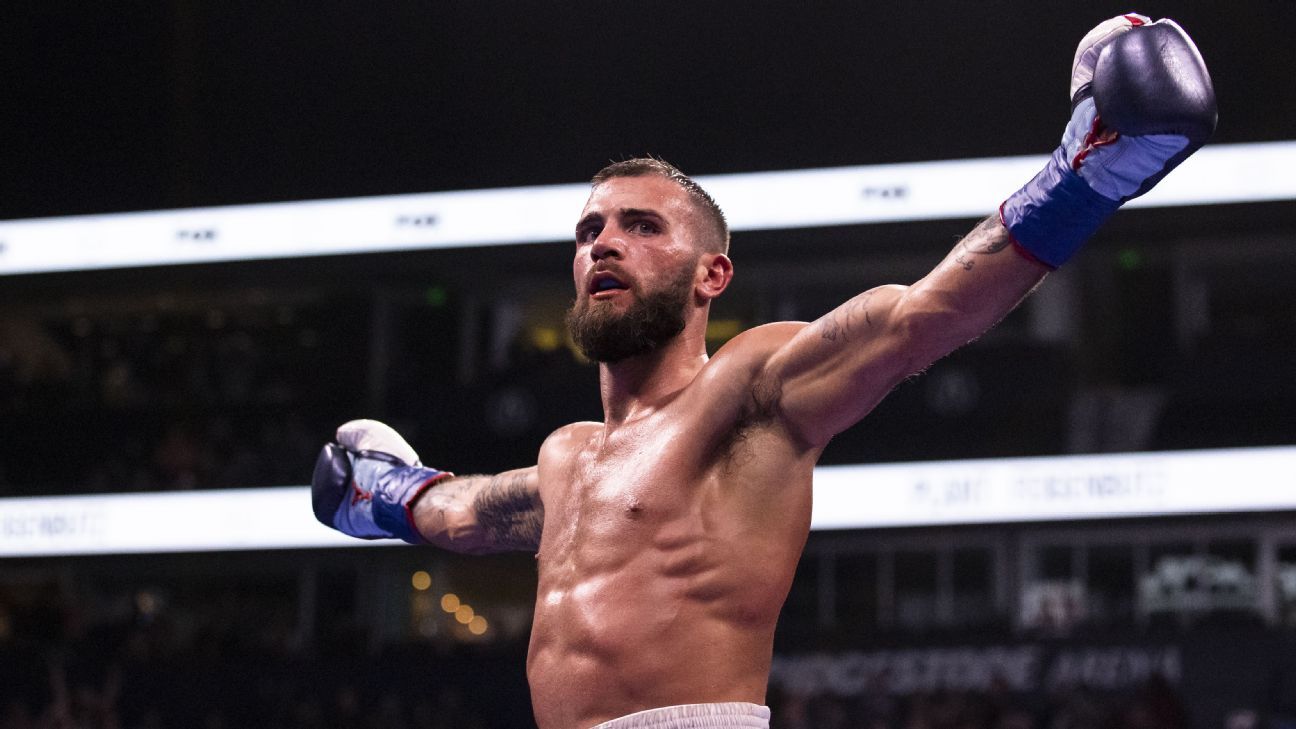 Super middleweight world titlist Caleb Plant’s dream since he was a child was to have a world title fight in his hometown of Nashville, Tennessee. He not only realized it on Saturday night, but won in dominating and emphatic fashion.

Plant beat down game mandatory challenger Vincent Feigenbutz for the entire fight until referee Malik Waleed finally waved it off in the 10th round of the Premier Boxing Champions main event at Bridgestone Arena.

Plant (20-0, 12 KOs), 27, has lived for the past few years in Las Vegas, but Nashville is still home. He has many family members and friends there, travels there regularly and even got married there in October. But he had never boxed professionally at home and pushed his team to place his second title defense in Nashville, where he gave his excited fans quite a show.

“I was super-fueled. I could have gone all night,” Plant said. “The whole city came out. Nashville, stand up! I felt great. I was relaxed, sharp. I told you guys I was going to stop this fight before the 12th round.”

Plant, the quicker, taller, longer fighter, found his range early and kept Feigenbutz at bay with a sharp jab and a full arsenal of other punches. He rocked Feigenbutz with a right hand-left uppercut combination midway through a big second round and never let up.

Plant continued to pound former interim world titlist Feigenbutz (31-3, 28 KOs), 24, of Germany, who was boxing in the United States for the first time, with an array of combinations in the third round in which he rocked his challenger multiple times and marked up his face.

Round after round, it was Plant doing as he pleased as he landed body shots, head shots and powerful jabs against the sturdy but slow Feigenbutz.

Plant had a particularly strong ninth round as he rocked Feigenbutz repeatedly with combinations and nailed him in the nose, which began to spurt blood.

Plant continued to pour it on in the 10th round. After hammering Feigenbutz with combinations, Waleed finally stepped in at 2 minute, 23 seconds.

“I can’t disagree with the stoppage,” Feigenbutz said. “For the sport of boxing, safety is always first. The referee did a very good job. It was fair. To be a good winner you have to be a good loser.”

“It was a very good experience,” Feigenbutz said. “Caleb Plant, to me, is the best of all the super middleweights. You saw my style — it’s a Rocky style. Sadly, I didn’t have much of my power at the end. It seems like he was always just 10 centimeters away from my punches during the fight. He was very fast. He was very creative with the way that he boxed. This morning when I woke up I was 168 pounds still and Caleb was 177 pounds. Maybe I will go down to middleweight.”

Feigenbutz was attempting to follow in the footsteps of Max Schmeling by becoming only the second German boxer to win a world title in the United States. Schmeling won the heavyweight world title in New York in 1930. But Feigenbutz’s 10-fight winning streak since an 11th-round knockout loss to then-world titlist Giovanni De Carolis in 2016 came to an end.

Although it likely won’t be his next fight, Plant wants to unify titles with fellow PBC fighter David Benavidez (22-0, 19 KOs), 23, of Phoenix, who has a mandatory defense on tap against Avni Yildirim in the spring.

“Everybody knows I want that unification fight with David Benavidez,” said Plant, who won every round on two scorecards while the third judge gave him all but the sixth round. “You know who the best 168-pounder is. If you want that you got to come see me. I’ve been wanting that fight. I’ve been asking for it and I’m tired of waiting.

“This performance to me says I’m the best super middleweight in the world. All these under guys at 168 pounds have been having tough fights against guys they should be killing and I’m killing everybody I should be having tough fights against. This guy was my mandatory. If I didn’t fight him I’d have been stripped. I went in there and did what I was supposed to do with the weight of the world on my shoulders and I did it in great fashion.”

In the co-feature, welterweight Abel Ramos, being badly outboxed and outpunched, scored two knockdowns in the final seconds of the 10th and final round to stop Bryant Perrella in a dramatic fashion.

“The fight isn’t over until it’s over. That’s the game,” Ramos said. “I’ve been sick for two weeks but no excuses. I ignored. I wanted to come here and perform.”

Ramos, seemingly realizing he was behind, went after Perrella hard in the 10th round and pulled out a miracle. Perrella appeared to be easily winning when Ramos dropped him with an uppercut out of nowhere with 25 seconds left in the fight. Perrella made it to his feet but he was in rough shape and Ramos was all over him. He dropped him again with a hard right hand; although Perrella made it to his feet, he stumbled and referee Jack Reiss waved off the fight with 1 second left.

“That was like Meldrick Taylor and [Julio Cesar] Chavez. It happened in the last second,” Perrella said, referring to the famed 1990 junior welterweight title unification fight that Taylor was winning when Chavez stopped him with 2 seconds left. “It’s boxing. I don’t want to take anything away from my opponent. I was winning every round convincingly. What can I say? There was second left in the 10th round. It’s just an experience that you go through in life and you have to overcome it. Absolutely I’d like to do it again with him. We can get a rematch in for sure.”

Ramos, who was trailing 88-83 on two scorecards and 87-84 on the third at the time of the knockout, was also familiar with the famed Chavez-Taylor fight.

“I watched the Chavez-Taylor fight like 10 million times and I never thought I’d be in something like that,” Ramos said. “It just goes to prove that fights are never over ’til it’s over. You have to fight every single second of every single round. Perrella’s a tough fighter. He’s a strong, strong fighter. I have nothing but respect for him. I expected a tough fight and that’s what happened.”

Perrella (17-3, 14 KOs), 30, a southpaw from Fort Myers, Florida, had a spring in his step from the outset and fired punch after punch against a more docile Ramos, who had a hard time keeping up. Perrella was effective with his right hand and although Ramos (26-3-2, 20 KOs), 28, of Casa Grande, Arizona, was aggressive he was not very effective until the miracle ending that extended his winning streak to eight fights in a row.

Former two-time world title challenger Diego Magdaleno used a fierce body attack to win a unanimous decision over Nashville native and fellow southpaw Austin Dulay. The judges had it 97-91, 96-92 and 96-92.

Magdaleno, in his first fight with trainer Clarence “Bones” Adams, was coming off a one-year layoff since taking a vicious beating from Teofimo Lopez Jr. in a seventh-round demolition but rebounded well.

“I knew mentally I could break him down. If I attacked the body I knew I could break him down,” Magdaleno said. “He’s a young prospect. He’s taller than me so my plan of attack was to get in close and go to the body. Experience has everything going for me. In my previous fight, I lost my head. This time I took my time. My camp said slow it down. Happy for the victory tonight.”

Referee Reiss gave Magdaleno a hard warning after he nailed Dulay with a left hand below the belt that sent him to the mat in the final moments of the fifth round. But Magdaleno continued to go the body in the seventh round, dropping Dulay with two minutes left. However, later in the round Magdaleno landed another harsh low blow and Reiss penalized him one point, but it turned out not to matter in the final scoring because Magdaleno had so thoroughly dominated the second half of the bout.

Dulay thought he won the fight.

“I absolutely won the fight. Every round he was hitting me low and in the back and on the hips,” Dulay said. “It was more times than he got called for. I won that fight 100 percent. I boxed the hell out of him every round, making him miss, catching shots, countering. Yeah he hit me with a few good body shots. That doesn’t replace the heavy shots that I hit him with every single round for 10 rounds straight. That is madness. And it was a unanimous decision? That’s crazy. That’s unbelievable to me.”

In a preliminary bout, former bantamweight world titlist and three-time U.S. Olympian Rau’shee Warren (17-3, 4 KOs), 33, of Cincinnati, ended a 13-month layoff with a lopsided decision win against Gilberto Mendoza (15-8-3, 7 KOs), 30, of Mexico. Warren won 100-90, 99-91 and 99-91 as he bounced back from losing a unanimous decision to Nordine Oubaali for a vacant bantamweight world title in January 2019 on the Manny Pacquiao-Adrien Broner undercard.

“It felt good to get back in there after being off for a year,” Warren said. “I felt like I had to get a little rust off me. But I think I got most of the rust off when I was in the gym training. Going 10 rounds it felt good. The first couple rounds I thought I was going to get him out of there, but … he’s got a hard head and he was going to be there all night. So I started switching up the pace, trying to figure him out and see if I had a shot to knock him out. I had fun in there.

“I hope to get back in May. I only need 90 days. I’ve already had my long layoff since last January when I fought on Pacquiao and Adrien’s card. I’m ready to get it on. I’m ready to move on. The only thing he did that I didn’t expect him to do was stay up.”