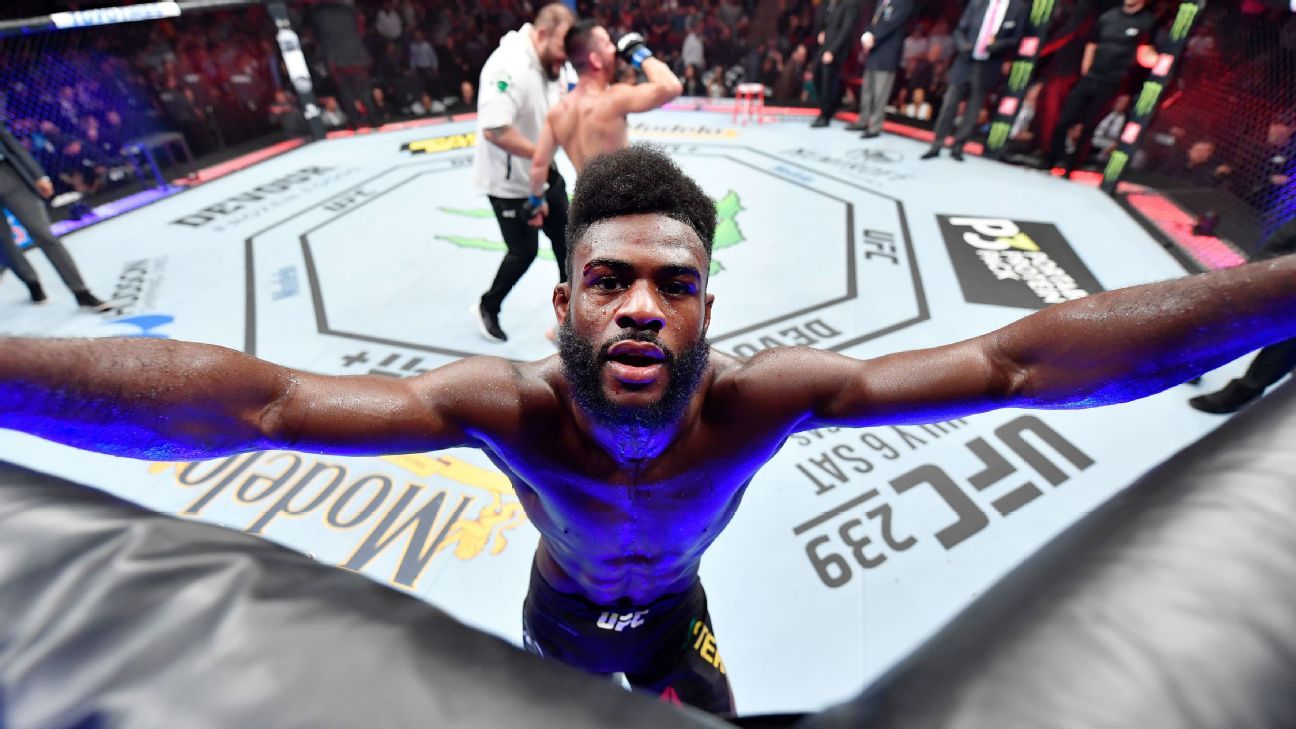 Aljamain Sterling made his intentions known for the near future. While the UFC bantamweight contender said he’s aiming for a return to the Octagon in May or June as he recovers from two wrist surgeries, he has his sights set on stopping “the boogeyman.”

That would be Petr Yan, who seems to be the hot name in the 135-pound division, and with good reason. He’s 6-0 in the UFC and 14-1 overall. Sterling, however, wants to show that he should be considered the division’s top contender.

To become a super paid, superstar, you need to do what the others have done. Clean out your division!! The checks and respect will come. Simple. https://t.co/NqRrhxhaTy

Sterling said he had a run-in with Yan at the UFC Performance Institute last year prior to his wrist surgeries in September. He questioned Yan’s last two performances in 2019 — struggling to earn a decision win against Jimmie Rivera and defeating a 40-year-old Urijah Faber.

“What is all the hype about?” questioned Sterling. “People need to separate their emotions from fact and fiction. I can see through all the bulls—. At the end of the day, he’s a tough competitor, but I think I’m tougher, I bring more skills to the table, I think I’m a smarter, more intelligent fighter.”

Also on the show:

Fury discusses walking away from boxing

Tyson Fury explains why he would be content with walking away from boxing once he has completed his deal.

Much of the sports world will focus its attention on Las Vegas on Saturday night for a heavyweight boxing rematch between Tyson Fury and Deontay Wilder. Both fighters are undefeated, with their first bout ending in a draw in December 2018.

Fury joined the show to discuss the bout, but also gave some surprising insight into his future in boxing.

Jan Blachowicz tells Ariel Helwani that he’s not interested in another fight that isn’t for the title.

Jan Blachowicz told Helwani he will accept no other fight until he gets his hands on champion Jon Jones.

Poirier makes his pick for Khabib-Ferguson

There will be hundreds of predictions from fans, fighters and media in the leadup to the April 18 fight between UFC lightweight champion Khabib Nurmagomedov and challenger Tony Ferguson. But this one is as educated a guess as we’ll hear, coming from the lips of the man who most recently was inside the Octagon with Nurmagomedov.

Drawing from his own experience, @DustinPoirier believes Khabib will defeat Tony Ferguson and says Justin Gaethje might be the one to “give [Khabib] problems” (via @arielhelwani) pic.twitter.com/VcNeQyAcWS

Dustin Poirier, who lost to Nurmagomedov by third-round submission last September, elaborated on his prediction during an appearance on Ariel Helwani’s MMA Show.

“It’s MMA. Anything can happen. Nothing’s for sure,” said Poirier. “But I just think [Nurmagomedov is] going to be the better competitor. If Kevin Lee was able to outwrestle Tony, and I think Danny Castillo did the same thing, Khabib’s definitely going to be able to do it.”

However, Poirier does believe one 155-pound contender might have what it takes to beat Nurmagomedov: Justin Gaethje.

“He might have the ability to keep his back off the fence and keep it in the middle and, if he does get taken down, scramble back up,” said Poirier. “I think guys like that, who are going to take risks and brawl and have the hips and wrestling knowledge to stay up, will give him problems.”

Al Iaquinta was paying special attention to Helwani’s show. Not only did he listen to what Mike Perry had to say ahead of their grappling match on Sunday, Iaquinta also caught an interview with fellow lightweight Dustin Poirier.

Hey @ALIAQUINTA if they pay me right and you down to do it at 170lbs I’ll fight you.

Poirier last fought five months ago against lightweight champion Khabib Nurmagomedov, losing by submission. Poirier said he still doesn’t have his next fight lined up. Iaquinta, who also is without an upcoming opponent, said he would be glad to fill Poirier’s schedule.

“That’s the fight,” Iaquinta said. “The UFC just has to call him. I’m pretty sure I called [UFC executive vice presdient] Hunter [Campbell], I texted [matchmaker] Sean Shelby, I said ‘That’s the fight.’ Maybe they didn’t offer it to him, but if they did he turned it down. So either way, the offer is extended now and that’s it. I think it’s a good fight.”

Poirier heard about the challenge and posted his response on Twitter.

Till anxious to fight again

Darren Till claims he was fighting a battle outside of the public eye to do everything he could to fight on March 7 at UFC 248.

There were multiple fronts to deal with. First and foremost, Till continues to deal with visa issues every time he attempts to fight in the United States, apparently because a form was filled out incorrectly. He got a last-minute reprieve ahead of his fight against Kelvin Gastelum at UFC 244 in New York, but Till couldn’t get cleared in enough time for it to make sense for the UFC to book Till against Jared Cannonier.

But that wasn’t all.

“We were having some contract issues, but they got sorted,” said Till, who started calling UFC matchmaker Mick Maynard. “I was just like, ‘Mick, please just do anything. I just want to fight.'”

Even as Till warmed up to the idea of Cannonier, the fight fell apart once Cannonier fell victim to a pectoral injury. Till started asking if he could be an alternate in case something were to befall Israel Adesanya or Yoel Romero on the way to their March 7 title fight.

“I’m nervy — three weeks to go, four weeks to go [to March 7] — is there anything? And [Mick’s] just like, ‘Darren, we just can’t get you the visa,'” Till said. “And I was thinking, ‘You must be able to do something. There must be a few strings to pull.’ I was sending him screenshots that I was private messaging Donald Trump, and he was just laughing his head off. I was like, ‘Mick, please, I’ll do anything.’

“I was going out of my mind on the weekend, just thinking how could I just even get in and just turn up on weight, without the UFC even knowing. And then if Yoel doesn’t make weight I’ll just be like, ‘I’m here. Do something, do whatever you can. I don’t even have to fight for money, just let me fight.’ But then my coach is just like, ‘If you if do that, you’ll cut all ties, so don’t even think about it.'”

Till is still holding onto the pipedream of being an alternate, despite an ankle injury that’s serious enough that Dana White mentioned it publicly.

“I’m not cutting weight, I’m just staying,” said Till. “My weight’s been quite low anyways, so I’m just keeping my weight as low as [possible]. If the UFC said to me, ‘If you had to make weight Friday, could you do it?’ I could probably most likely do it, that’s how good my weight is right now.

“I’m training hard twice a day, and I’m just staying ready for anything.”

As far as a future beyond UFC 248, Till dismissed any possibility of fighting on the UFC Fight Night card in London on March 21. Instead, as long as the situation remains as is, Till has his focus set on two potential long-rumored opponents somewhere down the line — Cannonier and Robert Whittaker. And while Cannonier is likely out for the foreseeable future with his injury, Whittaker’s next step is also uncertain. Whittaker withdrew from a scheduled bout against Cannonier in January, citing personal reasons.

Gegard Mousasi‘s frame of mind was at the worst possible place for a professional MMA fighter last June. He was playing out the string.

Perhaps that cost him the Bellator middleweight title. Mousasi lost the belt to Rafael Lovato Jr. by majority decision in London on June 22, 2019.

“I was tired,” Mousasi said. “I don’t know, maybe I was burned out a little bit.”

Nothing like another title shot to get your juices flowing.

Mousasi said he’s rejuvenated as he prepares for a fight with Douglas Lima for the middleweight crown in May. Lovato had to vacate the championship because of a career-threatening brain condition.

Lima, the Bellator welterweight titleholder, is moving up a weight class in hopes of becoming a two-division champion. Mousasi said they trained together eight months ago at Mousasi’s gym in Holland, including sparring for several rounds.

“I don’t know who won,” Mousasi replied. “In my mind I felt I won, but he really wasn’t showing anything. He was not in shape, to be honest, so I cannot make anything of that.”

Mousasi also noted that he recently re-signed with Bellator. The 34-year-old had one fight left on his contract, but said he had no interest in testing free agency and plans on retiring with the promotion.

“There was no need for it because I have a good relationship with Scott [Coker],” Mousasi said of the Bellator president. “I’ve been always treated well in Bellator. … I’m satisfied. That’s the big thing — I’m happy where I am.”