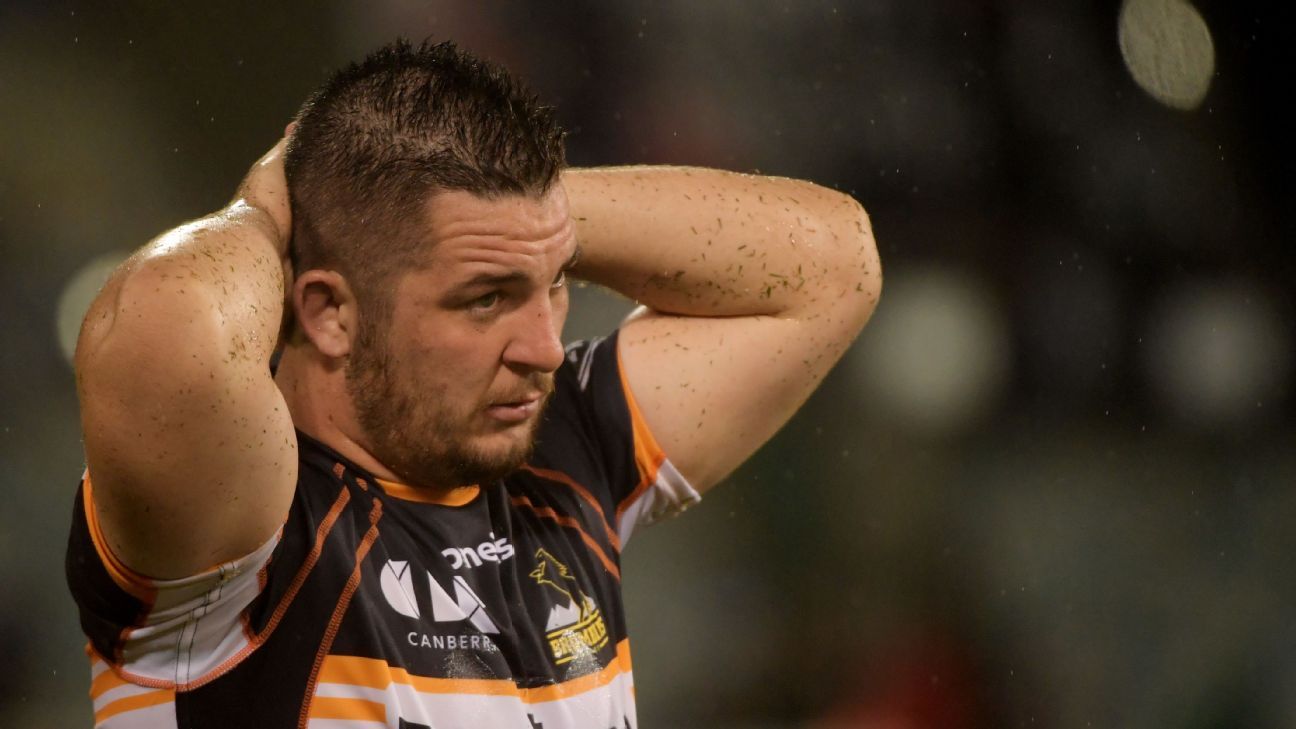 As Australian rugby keeps its fingers crossed for an improved broadcast deal, this was not the weekend Rugby Australia administrators were after.

The Brumbies and Reds were both in positions to win their respective matches over the Highlanders and Reds, only for a lack of discipline — perhaps some dubious refereeing in some cases — and a lack of experience seeing both sides slip to heart-breaking defeats.

Those losses saw the collective cross-conference record of the four Australian teams slip to 0-6 for 2020.

Elsewhere, there were wins for the Crusaders, Chiefs, Hurricanes, Stormers and Rebels; Dave Wessels’ side on the board courtesy of their 24-10 win over the Waratahs.

WARATAHS IN A HOLE, AND IT LOOKS LIKE GETTING DEEPER

NSW were always going to be up against it this season following the departure of more than 300 Test caps, a change of coaches and the introduction of some inexperienced youngsters; but only now is it clear just how tough they could do it in 2020.

Perhaps Daryl Gibson knew that when he walked out on the franchise despite having re-signed for one more season earlier in 2019; did the Kiwi see the writing on the wall as he imagined life without Nick Phipps, Bernard Foley, Sekope Kepu, Israel Folau, Adam Ashley-Cooper and Tolu Latu?

His replacement, Rob Penney, has since overseen the franchise’s worst ever start to the season at 0-3 following Friday night’s loss to the Rebels. And his team looks lost.

Fly-half Will Harrison’s introduction to Super Rugby hasn’t been made any easier by the fact two of his first three games have been played in slippery conditions, not that he was the only guilty party of an error-riddled Waratahs display in Melbourne.

And the Rebels, too, deserve some credit for the way in which they adapted to the conditions; the halves combination of Ryan Louwrens and Matt To’omua asserting its authority on a match that was there for the taking at 11-10 inside the final 15 minutes.

But the Waratahs could really only blame themselves; skipper Rob Simmons’ simple dropped kick-off one of many mistakes for which the responsibility could lie firmly at their own feet.

Simmons later admitted his side were “in a hole”. The worry is that hole could get far deeper before this team actually finds some sort of stride under Penney.

They look underprepared, down on confidence and should be getting far more leadership from a senior playing group that includes the current Wallabies captain, Kurtley Beale, Karmichael Hunt, Jack Dempsey and Simmons himself.

The Waratahs’ bye week should be spent not on giving their players a couple of extra days off, but instead getting to work on Monday and identifying just what they can gain from a season that already seems to have slipped away.

BRUMBIES GOT THE FINAL MINUTES ALL WRONG

The Brumbies’ clash against the Highlanders in Canberra was always going to be a grind. Downpours before the match, and showers during play, resulted in conditions that demanded a territory-based game plan that asked a lot of both sides’ forward packs.

And if you had a quick glance at the Brumbies’ half of the ledger and saw three tries to hooker Folau Fainga’a, it would be natural to assume the hosts had played the conditions pretty well.

And they had for the most part, save for poor game management inside the closing stages after replacement scrum-half Ryan Lonergan had kicked a penalty to put them up 22-16 in the 75th minute.

But instead of trying to clear their line and ask the Highlanders to work it back from 20-plus metres out in greasy conditions, the Brumbies tried to close the clock down with a series of virtual run-and-drop carries that demands the supporting players stay on their feet.

While the Brumbies forwards managed to do just that to begin with, replicating that play for more than 90 seconds, particularly given the worsening conditions, was always going to be a huge challenge.

When Lachie McCaffrey lost his feet, referee Nic Berry had little choice but to award the Highlanders a penalty and one last chance at victory. The visitors promptly kicked to the corner and with Murray Douglas sent to the sin-bin for bringing down the Highlanders’ first attempt at a rolling maul try soon after, the hosts were in serious trouble.

When the Highlanders peeled of the side and Teariki Ben-Nicholas rumbled over after more than 82 minutes, and the simple conversion nailed for a 23-22 win, the Brumbies’ heartbreak was complete.

But they should never have put themselves in that situation and the inexperience of Lonergan, fly-half Noah Loleslio and debutant replacement Reesjan Pesitoa was telling. The three Super Rugby rookies will no doubt learn from the defeat, but it will irk the Brumbies for a few days beforehand.

IF AARON SMITH WAS PAID BY THE WORD …

He’d be a wealthy man.

The veteran All Blacks scrum-half has always had more than just a little to say on the field, but he had his way with both referee Berry and Brumbies fly-half Lolesio throughout the 80 minutes in Canberra.

Smith could be heard over the effects microphone signaling out the “young bloke” repeatedly, and it seemed to rattle Lolesio who was guilty of a number of handling errors and a poor forward pass after the Brumbies scrum had come under pressure.

Lolesio’s first two weeks had been full of personal highlights; that was not the case on Saturday night.

And this was Smith at his nagging best as he “woo-hooed” on multiple occasions after the Highlanders had won a turnover or penalty, or had forced a Brumbies mistake. The All Blacks No. 9 proved the dominant voice on the paddock across his NZ Rugby-enforced 60 minutes of action.

Games away to the Blues and Sunwolves, and at home to the Sharks, looked to be tricky assignments for the Chiefs, Crusaders and Hurricanes in Round 3 respectively, but each Kiwi side showed their class in pulling away to commanding wins.

The Crusaders may have just unveiled the latest star from a back-row factory that has already produced the likes of Richie McCaw, Matt Todd and Jordan Taufua with Cullen Grace announcing himself on the Super Rugby stage.

Grace was in the thick of the action alongside fellow flanker Tom Christie as the Crusaders were forced to make 114 more tackles [212] than the Blues, the 20-year-old picking off three lineout steals on a night when the hosts could manage just nine of 15 lineouts on their own throw.

When the Crusaders did have the ball, their All Blacks aces were too hot for the Blues to handle. Both Jack Goodhue and Richie Mo’unga each scored and set up another with supreme handling efforts that will have had new All Blacks coach Ian Foster smiling.

It was pleasing also to see Damian McKenzie back to his free-running best in the Chiefs’ win over the Sunwolves, the fullback compiling the impressive attacking numbers of a try, try assist, two clean breaks and seven tackle busts. Most importantly, he in no way seems to be bothered by the lingering effects some other players have suffered after ACL surgery.

The Hurricanes’ home game against the Sharks looked like a potential banana-skin clash, given the South Africans’ strong start to the season and the hosts’ arduous return journey from Argentina. But after working their way to 17-all at the break, the Hurricanes powered away with three second-half tries to one.

Two of those were scored by winger Ben Lam while Dane Coles also got his name on the scoresheet after coming off the bench.

Given what we have seen from the Highlanders and Blues to date, the Crusaders, Chiefs and Hurricanes look set to fight out conference honours across the Tasman.

O’CONNOR, PAISAMI GIVE REDS SOMETHING TO SMILE ABOUT

Just like the Waratahs, the Reds find themselves winless after the first three round of Super Rugby.

But where NSW look to be anything but a finals-contending team, the Reds are playing a brand of rugby that can mix it with the elite teams of the competition.

The Reds have, in fact, led by three [Lions and Brumbies] and five points [Jaguares] midway through the second half of their three defeats only to run out of gas and lose their discipline down the stretch.

Queensland have already been dealt three yellow cards this season while on Sunday morning [AEDT], they gave away 14 penalties compared with the Jaguares’ three. Some of local referee Frederico Anselmi’s decisions left a little to be desired however, including a vital scrum penalty he awarded the Jaguares on their own line.

Brad Thorn’s side can do little about that now, and must instead focus their energies on the positive parts of their game.

Against the Jaguares in Buenos Aires, they came in the form of four first-half tries and the play of James O’Connor and rookie centre Hunter Paisami — who was a late call-up for Jordan Petaia — in particular.

Seven years after he started the British & Irish Lions series at fly-half for the Wallabies, O’Connor appears far more accomplished in the playmaking hotseat; the veteran utility now seems to understand how to manage a game while still possessing the attacking skill-set to create for those both inside and out.

Paisami, meanwhile, provided a direct running option in midfield on his way to three clean breaks, six tackle busts and a team-high 78 metres. With Petaia likely to miss a considerable amount of rugby, Paisami’s effort in Argentina should have downtrodden Reds supporters excited.

He, O’Connor and the rest of the Reds should be much higher up the Super Rugby ladder. It’s up to Thorn and the rest of his coaching staff to limit the frustration generated by that ladder position, and ensure they start their ascent up the table with a resounding win over the Sunwolves in Round 4.

Transfer Talk: Arsenal push for Chelsea’s Jorginho before deadline
Mazzulla, Celts staff to coach Giannis-led All-Stars
What does the hiring of Sean Payton mean for Broncos and Saints? Answering the biggest questions
Look to these players for a playoff push
Raiders add ex-Commanders OC Turner to staff