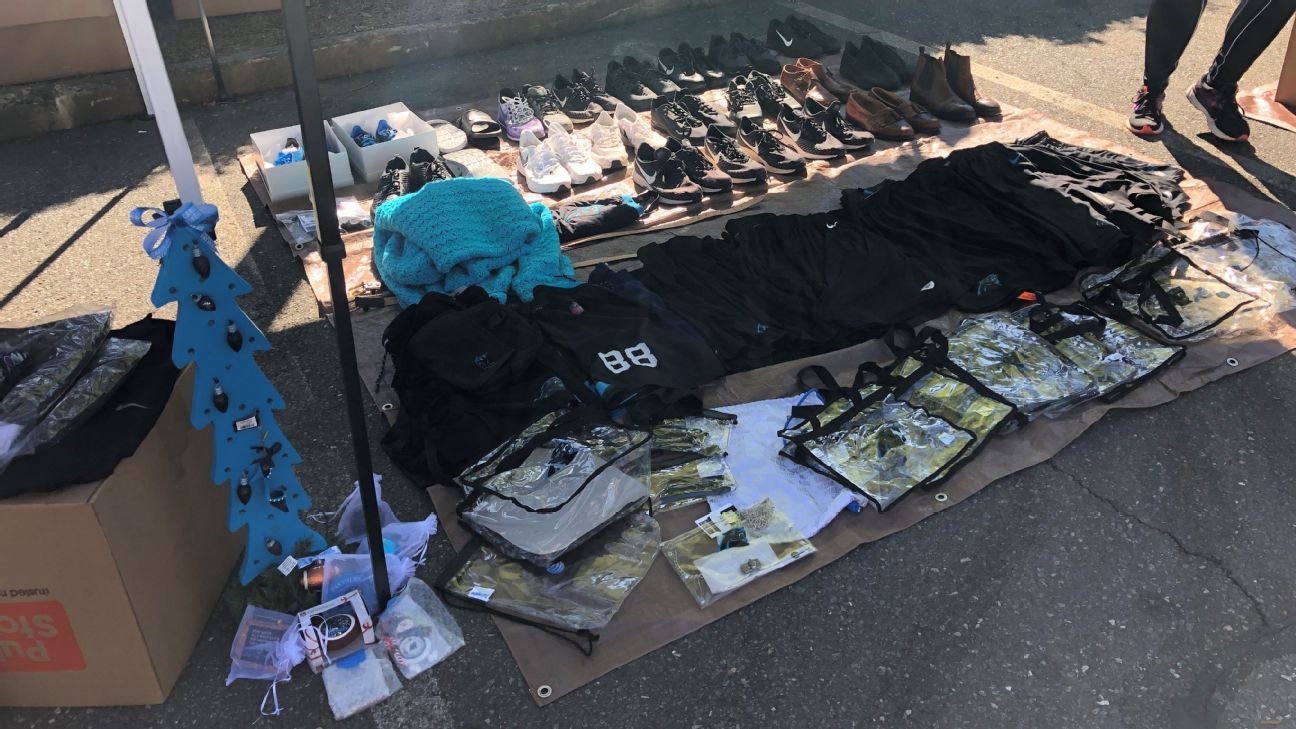 Only this time it was for charity.

Rivera and his wife, Stephanie, held a yard sale on Saturday at the Humane Society of Charlotte with the entire $30,237 raised going toward a new campus and research facility for one of their favorite charities during their time in the Queen City.

Approximately 3,000 people stood in line for the opportunity to purchase everything from one of the countless T-shirts Rivera had made with inspirational and promotional slogans to the military paraphernalia he acquired working with the USO of North Carolina to the shoes he wore on the sidelines.

Even Rivera’s dogs, a full-blooded golden retriever named Tahoe and Sierra, a mixed-breed adopted from this shelter, contributed to the fundraiser with leashes, collars, dog beds and even a dog crate.

“I didn’t realize how much stuff we actually had,” Stephanie Rivera said while holding onto Sierra’s leash.

Neither did Ron Rivera, who admitted it was tough deciding what items to keep and what to sale. Among those were items from his first win in 2011, first playoff win in 2014 and win in London this past season.

“This is kind of our swan song, our last opportunity to really say thank you one more time,” Rivera said.

Rivera was fired with four games left in the 2019 season. He left with two NFL Coach of the Year Awards, a 76-63-1 record that made him the winningest coach in Carolina history and what he called “a lot of stuff.”

Fans began lining up for that stuff hours before the noon start. Steve Osment and his family drove five hours from Richmond, Virginia, to participate in the sale.

They didn’t leave disappointed, buying three hats, a toboggan, a sweatshirt, a jacket, a dog bed, a cat bed, tennis shoes, dress shoes and a belt Osment said “I’ve been needing for the past year.”

“We’ve always loved Ron,” Osment said. “We just adopted a dog from a shelter. We like what he’s doing. For everything he’s been to the community and team, we love him and always will love him.”

Rivera, 58, talked a little football before the gates opened. Regarding the release of the 32-year-old Norman, who was also released under him at Carolina in 2016, the coach said that was made in an effort to get younger.

Regarding whether quarterback Cam Newton, rehabbing from Lisfranc surgery, will remain with the Panthers in 2020, Rivera said, “I just know a healthy Cam, I would never bet against him.”

Regarding the retirement of middle linebacker Luke Kuechly at 28, the release of Pro Bowl tight end Greg Olsen and other roster moves by new Carolina coach Matt Rhule, Rivera said: “It’s kind of the turn of the era. Now it’s a time for the new regime to come in and build it their own way.”

Rivera’s focus this day was on raising money with a sale that was spawned by a conversation between Stephanie and Tammy Reid, the wife of Kansas City Chiefs coach Andy Reid, while they all were in Philadelphia from 1999-2003.

Stucker for one is thankful for that conversation.