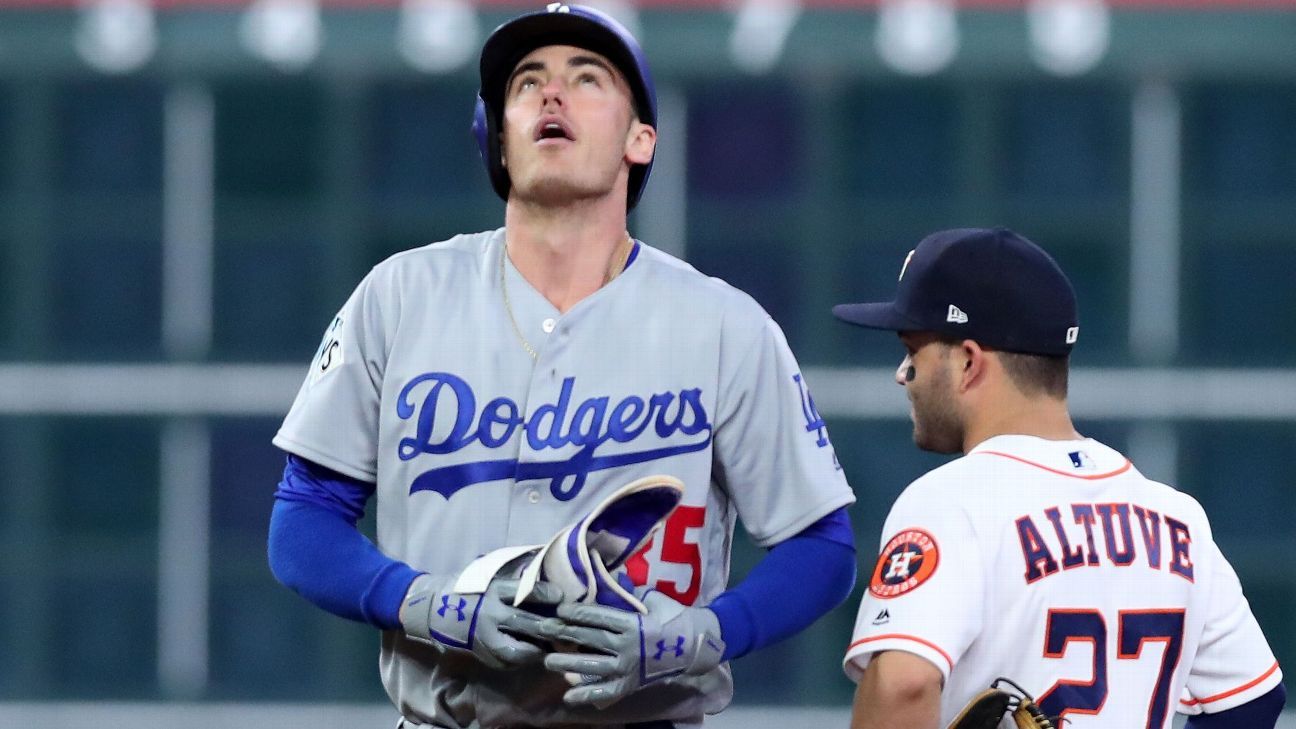 GLENDALE, Ariz. — Dave Roberts was watching his players throw bullpen sessions and conduct batting practice while members of the 2017 Houston Astros stumbled through pre-arranged apologies on Thursday morning. Later, while addressing an eager media contingent, the Los Angeles Dodgers’ manager struck a distinct tone — he was done talking about what may or may not have occurred three World Series ago, and he was ready to move on with the 2020 season. “Our story,” Roberts said, “is moving forward.”

The following morning, before the team’s first official workout of spring training, it was clear that many of Roberts’ players were not done venting, grieving and, in many ways, processing how the Astros might have unfairly beaten them in the championship round.

Cody Bellinger, one of the game’s brightest young stars, went scorched earth on the Astros, saying Jose Altuve “stole” the 2017 MVP from Aaron Judge and that he “lost respect” for that team. Justin Turner, one of the Dodgers’ clubhouse leaders, ridiculed Astros owner Jim Crane for initially stating that his club’s sign-stealing methods “didn’t impact the game.” Alex Wood, who had the foresight to constantly change the sign sequences while starting Game 5 of the 2017 World Series from Minute Maid Park in Houston, said he wouldn’t be surprised if several opposing pitchers threw at Astros hitters this season.

Clayton Kershaw, who might have been among the most directly impacted by the cheating scandal, admitted that he doesn’t know what to think.

“Us in this clubhouse, we’re all going to handle it differently,” Kershaw said. “And I think that’s awesome that everybody’s gonna answer these questions differently. Everybody’s gonna be honest about it, everybody’s gonna move on in their own way, and I think that’s really cool. I think as a team, we can all be individual in how we handle it, and then come together as a team after it and be ready to go. I think the script of this, of what happened in Houston yesterday, it didn’t seem as genuine. And I think over here, you’re gonna feel the genuineness of what we feel. And we’re going to move on a little bit easier from it, I think.”

The process is ongoing, the sentiments scattered. Kershaw believes adding a former MVP in Mookie Betts and a former Cy Young Award winner in David Price — essentially shaking up the core group, an approach Roberts has long believed to be important — “really helps bring a new excitement to this season.”

Turner wasn’t so sure.

“It’s just like ripping open a scab,” Turner said of constant revelations about the Astros’ methods. “It rehashes some things, and you go back, think what if, what happened. And that’s just going to drive us crazy if we continue to do that. You just gotta let them deal with it however they deal with it. Everyone’s gonna have their opinion, everyone’s gonna treat them however they feel necessary. Lucky for us, we don’t play them this year. So we don’t even have to worry about them. The rest of the league can deal with them.”

Ross Stripling was recently almost traded to the Los Angeles Angels, an American League West team that will open its season at Minute Maid Park and is scheduled to play the Astros 17 other times. He was asked if he would have taken it upon himself to throw at Astros hitters if that had been the case.

“I would lean toward yes,” Stripling said after some thought. “In the right time, and in the right place.”

Wood alluded to a fascinating dilemma with that approach.

“Somebody will take it into their own hands, and they’ll get suspended more games than any of those guys got for the biggest cheating scandal in 100 years,” he said. “It’ll be pretty ironic when that happens, because I’m sure that’s how it’ll end up playing out.”

Did the Astros get what they deserved? How aware were opposing players? Here’s what those around the game told us.
MLB players, execs on sign-stealing scandal

A group chat began with basically every member of the 2017 Dodgers team that lost to the Astros in seven World Series games shortly after Bregman and Altuve were unrepentant during the team’s fan fest around the middle of January. It was initially an effective outlet for some of the affected players, but the onslaught of text messages eventually died down. As the weeks progressed and spring training approached, some of those players identified their own purpose within the sign-stealing scandal.

Wood, among the most vocal on Twitter, has taken it upon himself to educate fans on why stealing signs the way the Astros did was such a big deal.

“When guys know what’s coming, it’s a whole different ballgame,” Wood said. “This is a game, but it’s also a lot of guys’ lives. It’s how they feed their families.”

Stripling pinpointed a goal — to ensure that the stigma of all this doesn’t die.

In that vein, several Dodgers will attempt to strike a difficult balance — of making sure the extent of the Astros’ crimes is not forgotten, but also ensuring that it isn’t a constant source of internal consternation throughout their pursuit of an elusive World Series championship. They’ll all navigate it differently.

On Friday, the Dodgers seemed consistent with one thought — that the Astros’ apology was not good enough.

Stripling thought it was “as bad as it can be.” Turner, like many others, didn’t go out of his way to watch it, but did catch Crane’s statement, which he later walked back, and said: “It’s mind-boggling to me that you had that much time to prepare for this and you had to retract the first thing you said in the statement.”

“That’s just wild,” Bellinger said when asked of Crane saying the Astros’ sign stealing “didn’t impact the game.” “I don’t know if he meant to say that or not, but that’s obviously not true.”

“To be honest, I don’t know what to think anymore,” Kershaw added. “Some of those guys seemed remorseful. Some of those guys said the right things, gave a good apology, and that’s great. We’ll move on with that. And then you get the owner up there saying some dumb stuff, and it’s like, ‘What’s going on? How can you be that ignorant to the situation?”

In the midst of his comments, Bellinger brought up how he just met Betts and Price and how excited that made him about what awaits. Turner struck a similar tone, acknowledging that the pain of the 2017 World Series would never vanquish while also expressing the importance of moving on from it.

“Obviously when you start talking about the beginning of spring training, there’s more opportunities for players to voice their thoughts, and there’s media that wants answers, which is completely fair,” Roberts said. “But I do think that once we get going, it’s got to be in the past. I think that they’re aware of that.”