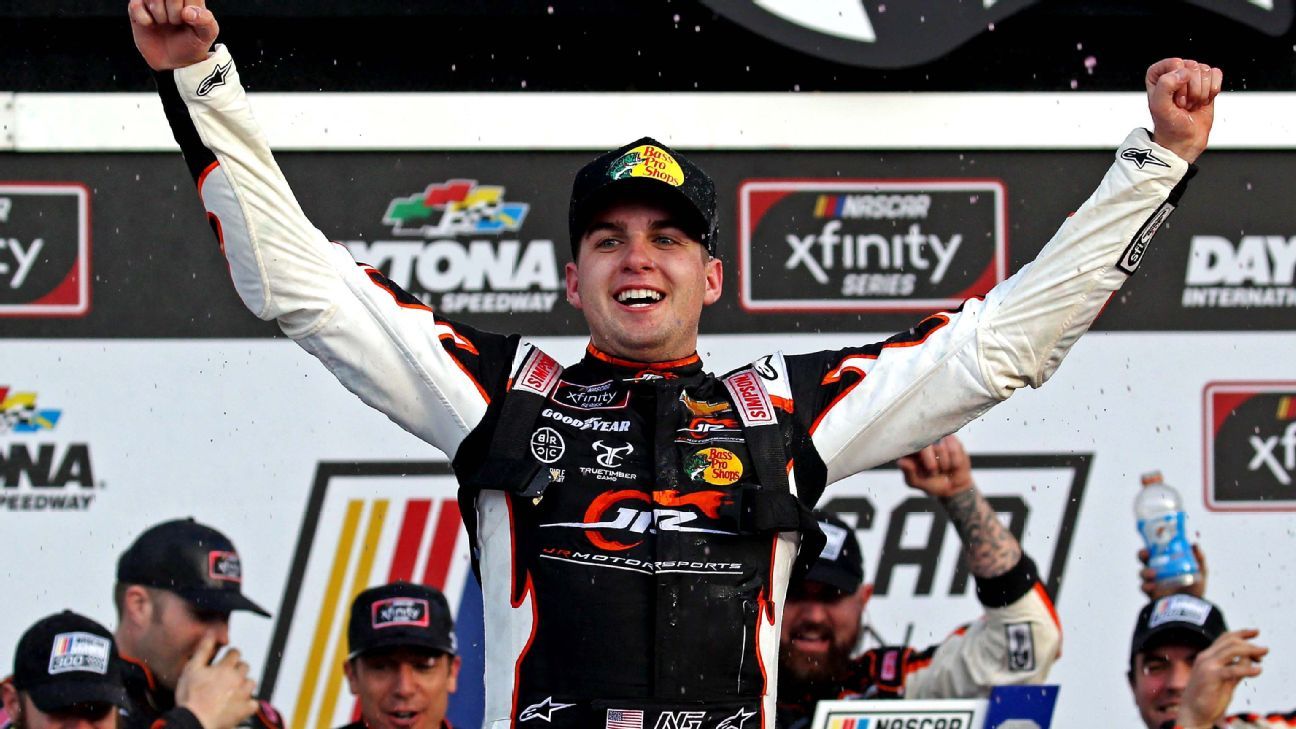 It was the third consecutive victory at Daytona for a car fielded by Dale Earnhardt Jr., his sister and Rick Hendrick in what they consider a family business.

“I can’t put it into words what I’m feeling right now,” Gragson said. “I’m trying to soak it all in and never thought this day would have come, but very, very thankful for everybody who’s been there along the way, and wouldn’t be here without them.”

While winning at Daytona was new for Gragson, it was anything but that for Earnhardt.

“It never gets old, man,” Earnhardt said. “I don’t expect I will do it ever again as a driver, but if I get here as an owner and have success like this, it’s a great feeling.”

Gragson and Chase Briscoe swapped the lead in the closing three-lap sprint to the finish, but NASCAR threw the yellow flag for a multicar crash on the final lap.

Harrison Burton and Timmy Hill, who will make his Daytona 500 debut on Sunday, were second and third, respectively, in Toyotas. Briscoe was fourth in a Ford for Stewart-Haas Racing.

“We had a good day. We fought back from a lot of adversity,” said Burton, the son of former Cup Series driver Jeff Burton. “We got damage. My team did a good job repairing it. We kind of still couldn’t poke through the hole like we needed to, but [Hill] got lined up behind me. Noah got out front about a car and a half and I thought, ‘He might be in trouble here,’ but then the caution came out [freezing the field and ending the race].”

Gragson celebrated old-school style, first by climbing the fence at Daytona International Speedway — a nod to both three-time Indianapolis 500 winner Helio Castroneves and recent NASCAR Hall of Famer Tony Stewart. Then Gragson fueled the flames on the Daytona track surface created by his celebratory burnout.

“I caught the track on fire. I thought that always would be really, really cool to catch the track on fire from doing a burnout, and I was able to do that,” Gragson said. “And yeah, [I was] just trying to give the fans a show. Coming off of Turn 4 and through the tri-oval on that last lap and the checkers were waving and I saw everybody up on their feet and could hear them cheering.”

Gragson said he just wanted to give the fans a show for their money.

“I threw the water bottle [into the stands], too. Hopefully someone got it,” Gragson said. “I was thinking about giving them my gloves, too, but I only get like two pairs of those a year, so I’ve kind of got to sacrifice those a little bit and keep them, get them worn out a little bit after the first race.”

He ran up and down the frontstretch pumping his fists in celebration, then slid across the hood of his JRM entry for the drive to victory lane.

“It’s Daytona — you never know if you get this chance again, so do what you want to do,” Earnhardt said.

Gragson is the seventh different race winner for JR Motorsports.

‘We’ve been waiting for this feeling for very long’
Doncic leaves game vs. Suns with ankle injury
Rahm surges at Torrey Pines, within 2 of Ryder
What does the hiring of Sean Payton mean for Broncos and Saints? Answering the biggest questions
Late Mitoma goal sends Liverpool out of FA Cup