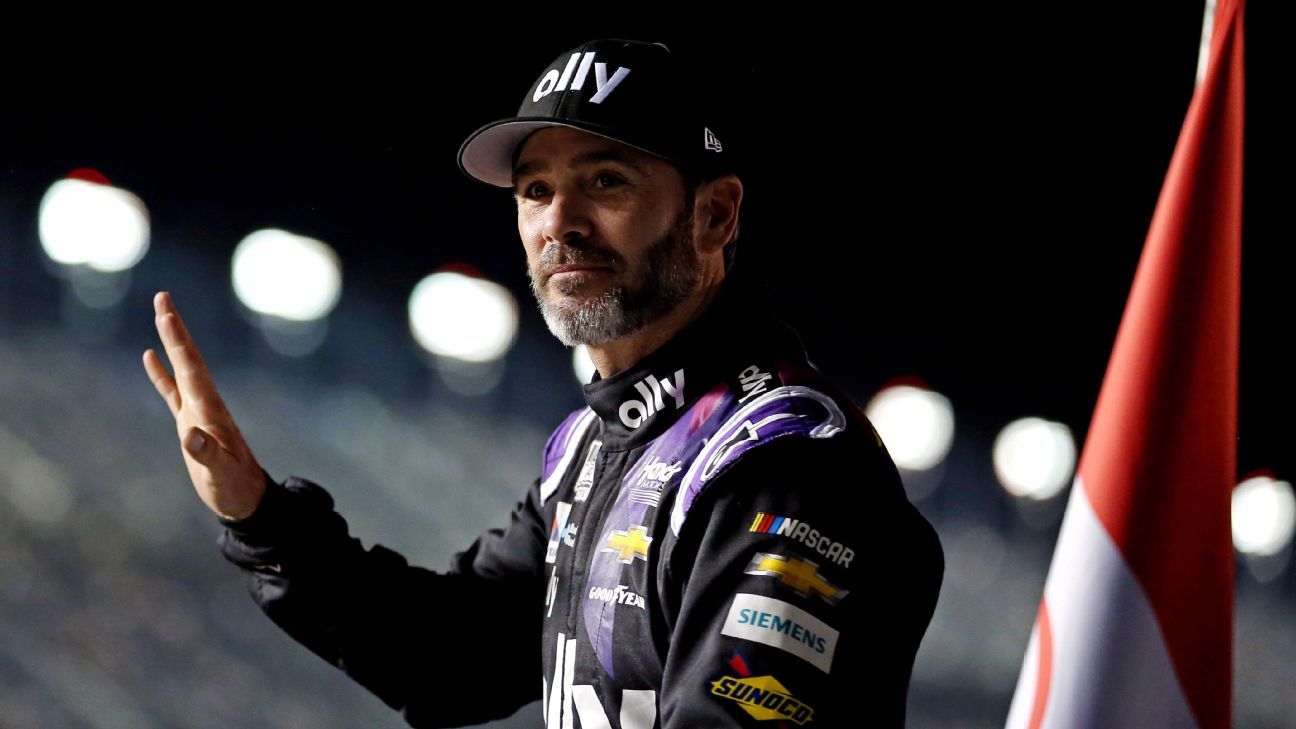 DAYTONA BEACH, Fla. — When Jimmie Johnson is asked a question that requires some deep thought, a topic that requires him to pull from a memory, he does this thing with his eyes, head and brain. He will clamp his eyelids shut, tilt his head to the side, or even tilt it back so that his face points toward the ceiling, and he will pause … sometimes for several seconds. Then, when his synapses have fired and his file collectors have found what his brain was looking for, he snaps everything back into its original position and answers the question.

“Yeah, I guess I do that, don’t I?” said the gray-bearded 44-year-old racer, he of the seven Cup Series championships, 83 wins, two Daytona 500 trophies, and NASCAR Mount Rushmore membership. “I think that when you get older and your brain becomes packed with so many memories, at some point you have to do a little digging to find what it is you’re trying to remember.

“Or,” he added, laughing and tapping his head with his finger, “I got upside down racing in the desert too many times as a kid and that makes it hard to navigate this thing.”

Johnson’s ability to dig through those memory banks will be pushed from now until Thanksgiving, a gauntlet that began this week when his arrival at Daytona International Speedway marked the dropping of the green flag on what he says will be his final season as a full-time racer. As he made the rounds during Wednesday’s Daytona 500 media day, he was already discovering the challenge of a dual line of questioning that is guaranteed to continue until season’s end.

“The conversations have already started about putting my career in perspective, remembering the best and worst moments, you know, lifetime achievement award kind of stuff,” he said. “But then there are also the here-and-now questions about our struggles to win races the last two seasons. What are we doing to fix that? It’s an interesting two-lane highway I’m traveling already. We just have to figure out the best way to balance that out over the course of the next 10 months of racing.”

When he says “we,” he is referring to an inner circle that includes his wife, Chandra; his two young daughters, Genevieve and Lydia; boss Rick Hendrick; crew chief Cliff Daniels; and friends and mentors who have already retired, especially Jeff Gordon, the former teammate and car co-owner who gave Johnson his big break nearly two decades ago. It was Gordon who famously announced in 2015 that he didn’t want his final season to become a farewell tour with different tributes and gifts at every stop along the way. Before the season had made it into spring, he had realized that was a losing battle and instead embraced the nostalgia and the showering of love.

As Johnson explains that, he does the eyeball recall thing twice. He seems to have it all figured out. And he insists that it is all of this other stuff that isn’t normal. When he gets behind the wheel of his race car, that will be the escape back into a known reality.

“But…” he adds, his face breaking into a smile, “if I am being honest, I truly have no idea how it is going to feel when it’s, say, maybe my last Daytona 500, this Sunday. Or my last race at this place or that place. Or, if we think it might be my last trip to a certain place, and there I am fighting for a win there in the closing laps, what is that going to be like?”

In other words, he understands that there will be variables added to his 2020 goodbye equation. Therein lies the problem with variables. They vary.

“My goal, and I think it is safe to say this will be Jimmie’s goal, too, was to go out as competitive as possible,” said Gordon, who finished his full final season as a member of the championship’s final four contenders at the 2015 season finale. He was never in true contention that night at Homestead-Miami Speedway, but he was on the cusp, with a real, genuine chance to win the title. The win that propelled Gordon into that final four was his only win of the year, in the season’s 33rd race, at Martinsville Speedway, a racetrack of tremendous personal importance throughout his incredible career. “No one wants to go out as irrelevant. That’s the nightmare. And it’s also not fair if we’re talking about a Jimmie Johnson, one of the greatest of all time.”

Johnson could very well be the greatest of all time. But most of the other racers who preceded him in that NASCAR GOAT conversation found themselves suddenly forced to wrestle with that irrelevance nightmare. David Pearson and Richard Petty both won races by the bunches for years and then, for both of them, it just stopped. Darrell Waltrip, a seemingly ageless wonder, remains embarrassed about the winless ways of the final stanza of his driving career. Even Gordon and Dale Earnhardt had to endure droughts before rebounding back into late-career title contention.

Johnson has admitted his total befuddlement over his No. 48 Chevy’s overnight lack of success. For 16 seasons he averaged more than five wins per season. In 2017, the defending Cup champion won three times and finished 10th in the standings. He hasn’t won since, a streak of 95 starts without a trophy. Last year, he was never in the championship conversation, going through two crew chiefs in 36 races, after having only one man atop the pit box for the first 615 starts of his career.

“When you’re winning all the time, and we did for a long time, there’s certainly a piece of you that thinks it will never stop, but then it does,” Johnson said. “And there are a lot of reasons that happened. We are close to fixing those issues. That was a big factor in my decision to do this one more year.”

But it wasn’t the biggest factor. The biggest would seem to be those two little girls, now 9 and 6, and the fact that they were even littler back when their daddy was winning races. Too little to remember it, mostly.

“That was the biggest family goal that my wife and I discussed, to be present,” he said. “To really make sure we experience this as a family. The girls will be with me more here at the racetrack than they have in the past. It’s one thing to be there. That’s easy. But another thing to really take the time to experience it.”

Jimmie Johnson is doing that thing again. He’s going through those files. This time he opens up a memory from his own childhood, with his parents and his little brother, all crammed into the family car and going to watch a race somewhere.

“Those are my greatest childhood memories,” he said. “Riding to the track, the four of us. Listening to music and stopping to get pizza. I don’t even think about the racetrack itself. I think about us being together.”

The one-time wunderkind-turned-gray-bearded veteran doesn’t have his eyes closed now. They are wide, lit up and maybe even a little damp.