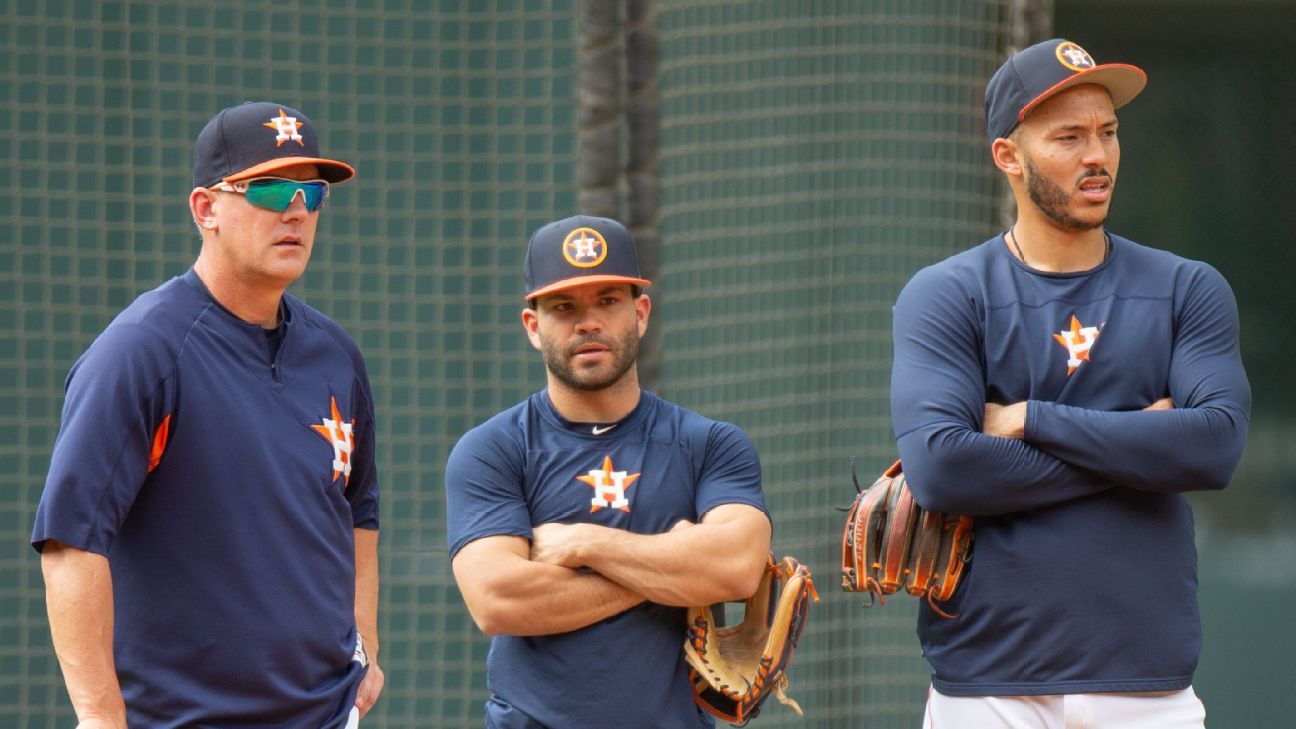 The impact of the Houston Astros‘ sign-stealing scandal is reverberating throughout Major League Baseball. There has been immediate impact — three managers lost their jobs in a week, along with the Astros’ general manager. And through all of the revelations, both the Astros themselves and players throughout the game have had something to say about the Astros’ conspiracy to steal signs electronically and relay that information in real time to their players at the plate in 2017.

“I’m not going to let them forget the fact that they are hypocrites, they are cheaters, they’ve stolen from a lot of other people and the game itself.” — Reds pitcher Trevor Bauer

Yankees GM Brian Cashman on whether sign-stealing had an impact on the 2017 ALCS; “I definitely think it had an effect on things… without question. Certainly the Houston Astros were dealing with a distinct advantage more so than their opponents. That’s a fact. I don’t think anybody can disagree with that, even though they may try.”

“It’s just like ripping open a scab. It rehashes some things, and you go back, think what if, what happened. And that’s just going to drive us crazy if we continue to do that.” — Justin Turner, Los Angeles Dodgers infielder, on the revelations about the Astros’ methods.

“It’s a fair question. I think everyone is going to have to draw their own conclusions. I hope over time, and the demonstration of the talent of this team and the players and the careers that are being had — we have some of the best players in the entire sport all together on the same team — I hope over time, it’s proven that it wasn’t.” — Former Astros manager AJ Hinch, on whether the Astros’ 2017 title is tainted by initial revelations about their sign stealing.

“When you analyze the games, we won fair and square. We earned that championship.” — Astros shortstop Carlos Correa

Brian Cashman: “If it wasn’t for Mike Fiers, no one maybe ever would have known. This is a warning to anybody that’s doing anything, in any arena that’s wrong, that the truth usually always comes out. If people are doing stuff that is wrong or against the rules, there are no secrets, it usually comes out eventually; that story does get told. That’s a warning sign for people when they make those choices going into it. There’s big price to be paid for it.”

“I’m glad we’re at this point right now, and obviously Mike [Fiers] had a lot to do with that. … It’s supposed to be an equal playing field, and it wasn’t.” — Oakland Athletics manager Bob Melvin

“I think that leaving Houston and going to a different team, I think you have to at least say, ‘Hey, they do some things, you might have to switch your signs up or you might need to do something,’ For [Mike] Fiers, it’s a tough situation to be in because you have teammates in Houston, but you also have new teammates. It’s a sticky situation.” — Tony Kemp, former Astro and new Athletic

A’s pitcher Sean Manaea rips the Astros for how they have handled their role in the sign-stealing scandal.

The Astros apologize, sort of

Astros owner Jim Crane: “I want to say again how sorry our team is for what happened. I want to repeat this will never happen again on my watch.”

“While the evidence consistently showed I didn’t endorse or participate in the sign-stealing practices, I failed to stop them and I am deeply sorry.” — Hinch, immediately after his suspension and firing in January.

“No one put a gun to our head. It would be a lie to say that one or two people are responsible. We are all responsible.” — Astros infielder Yuli Gurriel

“We are ALL responsible. Carlos [Beltran] and Alex [Cora] were great to us.” — Astros outfielder George Springer, on stories suggesting the veteran DH and coach were responsible for the sign-stealing initiative.

“No one put us up to this. We did it. All of us, not one person made us do anything.” — Astros infielder Alex Bregman

“He would say, ‘I don’t want this. I can’t hit like this. Don’t you do that to me.’ [Jose Altuve] played the game clean.” — Correa on his teammate.

“Our opinion is that this didn’t impact the game.” — Jim Crane, Astros owner

“It was definitely an advantage.” — Correa

“No, I don’t think I should be held accountable.” — Crane

Doug Glanville argues that the Astros’ response on Thursday to the sign-stealing scandal wasn’t enough and begs the question on how much they will actually reveal.

“I thought the apologies were whatever. I thought Jim Crane’s was weak. I thought Manfred’s punishment was weak, giving ’em immunity. I mean, these guys were cheating for three years. I think what people don’t realize is Altuve stole an MVP from [Aaron] Judge in ’17. Everyone knows they stole the ring from us.” — Dodgers slugger Cody Bellinger

“There’s no sincerity. There’s no genuineness when it comes to it. I know that if I messed up big in that way, I’d be the first one to let you know just how big of a mess-up it was. It’s hard to believe. It really is. It’s sad.” — Cubs third baseman Kris Bryant, on the Astros’ belated attempt to apologize.

Kenley Jansen firmly believes the Astros’ cheating scandal is “worse than steroids” and also betting on baseball. He suggested that teams caught doing it shouldn’t qualify for the upcoming playoffs and added that “everybody in the world is laughing” at how MLB doled out punishment. “I can apologize. I can hit you in your face right now and apologize — ‘I’m sorry, I will be a better player’ — and not get suspended. What are you gonna teach kids out there? You’re not gonna teach anything.”

“They mocked everything about everyone who said they were doing something under the table or illegal or whatever. Cheating is one thing — it’s not OK — but at least if you cheat and you come out and you get caught and you’re like, ‘Look, I did this and it wasn’t right. This is why I did it. I’m not going to do it again, I learned my lesson.’ … Whatever, you can be contrite about it, speak honestly about it, but even now, we don’t even have a freakin’ apology that means anything from any of them.” — Bauer

“That’s just wild. I don’t know if he meant to say that or not, but that’s obviously not true.” — Bellinger, in response to Crane saying the Astros’ sign stealing “didn’t impact the game.”

“I’m pretty sure it was going in in 2018 and 2019, too. If they didn’t get caught, they’d still be doing it. And they’re only doing this apology because they got caught. Everyone around the league is upset and rightfully so, because it’s really a disgrace to the game.” — Bryant

Jose Altuve, Alex Bregman and Justin Verlander express their contrition for their involvement in the Astros sign-stealing scandal, while Altuve denies a buzzer conspiracy.

Cody Bellinger, when asked if he believes the Astros were cheating in 2018 and ‘19, as well: “A hundred percent. I don’t know why they would stop.” Bellinger said he and others wondered how the Astros were so tough to beat at home. “And when it came out that they were doing this, it was just obvious.”

“I don’t know what human hits a walk-off home run against Aroldis Chapman to send your team to the World Series and one, has the the thought to say ‘don’t rip my jersey off,’ but two, go in the tunnel, change your shirt, and then go out and do your interview. Like that — that makes no sense to me.” — Bellinger, on Altuve’s reaction and actions after hitting the game-winning home run in Game 6 of the 2019 American League Championship Series.

“Altuve has played the game clean. Always. Always. He earned that MVP. He hit that home run off Chapman, fair and square.” — Correa

“We got investigated for three months. The commissioner’s office did as thorough of an investigation as anyone could imagine was possible.” Hinch, on being asked a yes-or-no question about whether the team was using buzzers or other signals in the 2019 postseason.

“When [Bellinger] talks about that we cheated for three years, he either doesn’t know how to read, is really bad at reading comprehension or is just not informed at all. The commissioner’s report clearly says that all those activities were conducted in 2017. 2018 nothing happened. 2019 nothing happened. It was just talented players, playing the game of baseball with passion and winning ballgames.” — Correa

Carlos Correa says that Jose Altuve did not want to use the sign-stealing scandal and vehemently denies Altuve and the Astros used buzzers.

Astros manager Dusty Baker calls on Major League Baseball to put a stop to any seemingly premeditated retaliation that may come against the Astros this season.

“I think players will deal with it the way it should be across the league. I don’t think it’s going to be a comfortable few ABs for a lot of those boys, and it shouldn’t be. They shouldn’t be comfortable.” — Pitcher Mike Clevinger, Cleveland Indians

“Somebody will take it into their own hands, and they’ll get suspended more games than any of those guys got for the biggest cheating scandal in 100 years. It’ll be pretty ironic when that happens, because I’m sure that’s how it’ll end up playing out.” — Dodgers left-hander Alex Wood — who started Game 4 of the 2017 World Series against them, on pitchers retaliating against the Astros by throwing at them.

“I’m depending on the league to try to put a stop to this seemingly premeditated retaliation that I’m hearing about. … I’m just hoping that the league puts a stop to this before somebody gets hurt.” — New Astros manager Dusty Baker

“The game has changed. I think the commissioner has made it very clear in the past few seasons that throwing a baseball at somebody isn’t an appropriate form of retaliation in the game anymore. The problem is knowing if it’s on purpose or not. But I guess when you come out and say I’m going to do it on purpose, you know.” — Justin Verlander, Astros pitcher