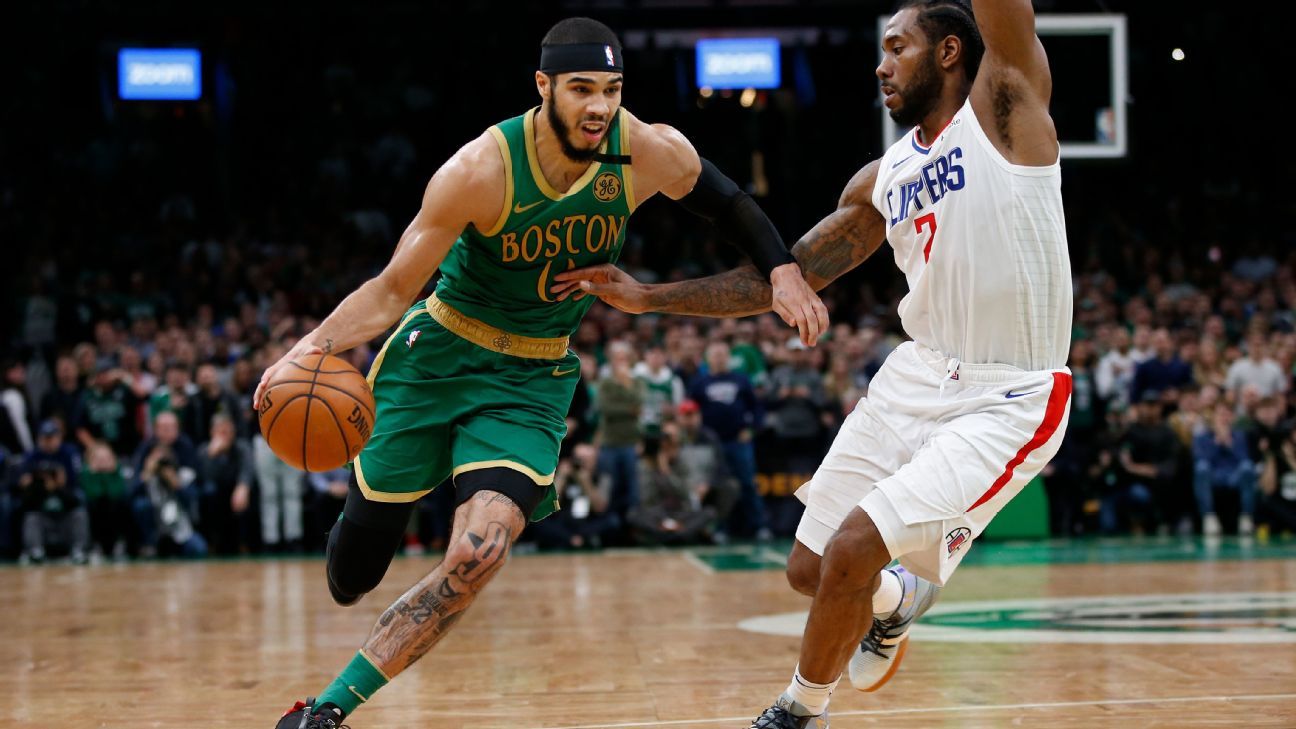 BOSTON — Since Kemba Walker signed with the Boston Celtics last summer, he has repeatedly spoken about the potential Jayson Tatum possesses.

And after Tatum turned in a master class performance Thursday night, finishing with 39 points and nine rebounds in just under 48 minutes in Boston’s 141-133 double-overtime victory over the LA Clippers in the final game before he appears in his first All-Star Game, Walker had more to say.

“Thus far, yeah,” Walker said, when asked if this had been the best game Tatum had ever played. “He was incredible. He made every right play. He made every big shot.

“He was the best player on the court tonight.”

By saying, “thus far,” Walker insinuated Tatum has more levels to grow his game from here. But if this is as good as it gets, the Celtics will still be quite happy.

Tatum checked every box in this one. Durability? In a double-overtime game, he played more minutes than anyone on the court. Efficient scoring? He finished the game 14-for-23 from the field, including going 5-for-10 from 3-point range. Foul drawing? He finished the game with 10 free throw attempts, tying his career high (and also showing the one blemish on his performance, as he made only six of them).

And defensively? All Tatum did was hold Kawhi Leonard to 3-for-11 shooting in the game when he was guarding him — including 1-for-7 from the field in the fourth quarter and the two overtime periods, according to Second Spectrum’s player tracking data.

It was a tour de force of a performance — one that came against one of the league’s best teams, and its best players (at his position) as Tatum prepares to head to Chicago this weekend. And, afterward, he admitted that getting the chance to play against players like Leonard and Paul George, who left the game in the second quarter with a strained left hamstring, helped boost his level of play.

“Any time you get a chance to play against guys you look up to, or arguably are the best guys in the league, it definitely kind of raises your level of play,” Tatum told ESPN. “I enjoy competing against the best players.”

Tatum was not only competing against the best players — he looked like one of them. On a night full of superlative performances and impressive moments on both sides — Marcus Smart finished with 31 points, including scoring Boston’s first 10 points of the game; Lou Williams had 35 points and eight assists, including nearly beating the Celtics by himself in the fourth quarter; Leonard had 28 points, 11 rebounds and four assists; and Walker had 19 points, nine rebounds and seven assists — his clearly stood out among the rest.

“It’s just his maturity with it,” Smart said. “He takes his time with it, and we trust him 120%. He knows it, there’s the extra confidence he already has and it’s more confidence for him, to go out there and be the player we see in him.

“He’s doing a great job, but you can definitely tell that he’s matured, he’s put in that work, and it’s all showing him. Not just for him, but for this team. It’s amazing.”

Tatum has previously said that he holds players like Leonard and George up as the models for what he aspires to be: an elite two-way player. During Tatum’s time with Team USA, they were the two names that Gregg Popovich threw at him as examples of what the Hall of Fame coach thinks he can become.

Going up against them Thursday night, those aspirations and potential gave way to more tangible proof that he’s at least approaching their level — with the fact the All-Star Game lies on the horizon only as an added bonus.

“He’s been playing really well, but not only has he been scoring, he’s just been making the right play. I think that’s what’s most important. You’re driving and kicking, he’s seeing his reads, and he’s doing the right things.”

Tatum did so many right things on Thursday night. And, as a result, the Celtics went into the All-Star break with a 38-16 record, having won eight of their final nine games before the break, and are firmly ensconced as the Eastern Conference’s third seed. It’s a far cry from last year’s tumultuous season, one that ended with a thud in a five-game loss to the Milwaukee Bucks in the Eastern Conference semifinals, or even Team USA’s disappointing seventh place finish in the FIBA World Cup — in which Tatum missed the medal round with an ankle sprain.

But after Thursday’s game, Tatum admitted the trials and tribulations of last season have helped him learn how to reach the level of play he showed Thursday night.

“I think all those things have helped put me in the position I am now,” Tatum said, “and upped my level of play as I continue to try to figure this out.”