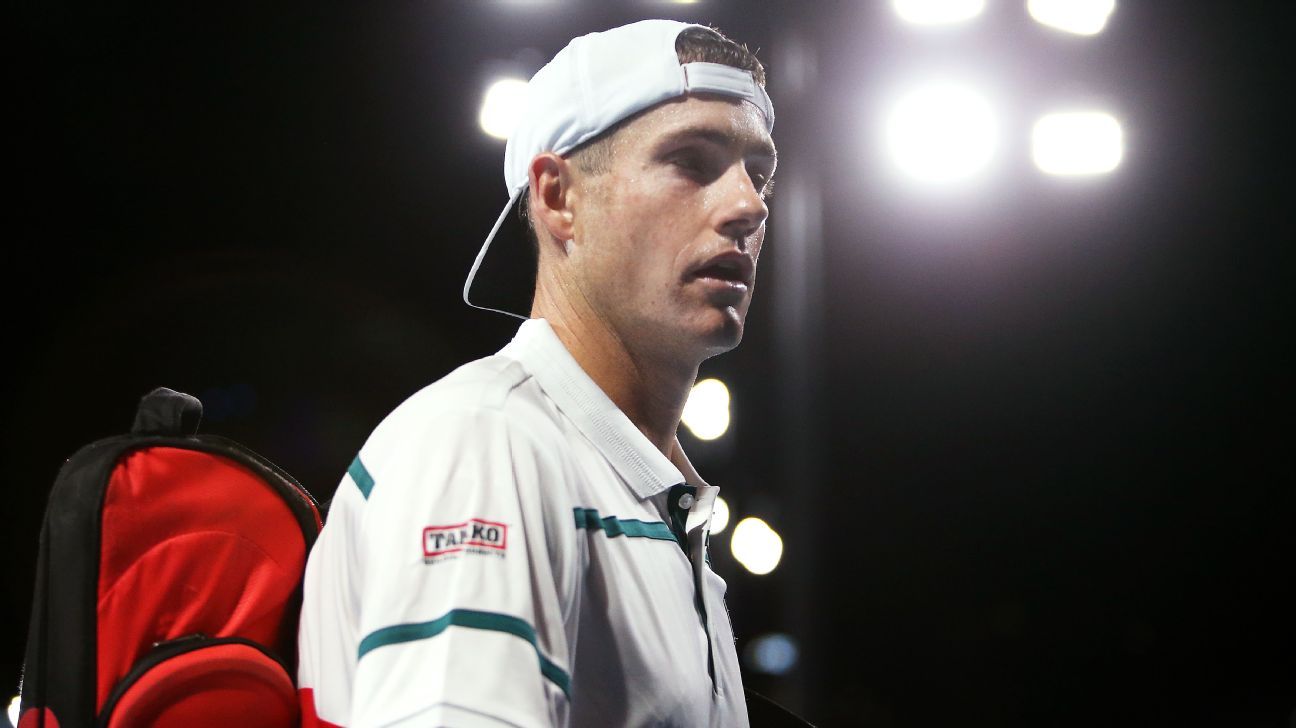 UNIONDALE, N.Y. — Steve Johnson squandered multiple chances in his second-round match with Andreas Seppi, 35 years old and ranked No 98, last week at the New York Open. When he smacked a double fault that sealed the match for Seppi, Johnson waved a hand in futility, called for his towel and cast his eyes up at the dark, light-studded ceiling of the Nassau Coliseum, muttering.

It has been like that a lot lately for Johnson, who’s been shuttling back and forth from the Challenger to the ATP Tour, taking one step forward and two steps back in the quest to regain the form that once lifted him to the No. 21 ranking. He isn’t the only faltering American man.

The tennis year is only six weeks old, but U.S. women, led by Sofia Kenin, have already hit some electric highs: an Australian Open singles title and a dramatic Fed Cup win that earned Team USA a berth in April’s Fed Cup finals tournament. On the ATP side of the fence, the best result for an American has been Tennys Sandgren‘s unexpected quarterfinal finish at the year’s first major.

The U.S. has eight players in the ATP Top 100, but these are challenging days for most of them.

“I do think we’re in better shape now that we were four or five years ago,” John Isner, the top-ranked American at No. 18 and top seed at the New York Open, said. “We have more promising players in that 23-and-under set now, but they still have a long way to go in terms of maturity if they want to compete with contemporaries like [Alexander] Zverev, [Stefanos] Tsitsipas, [Andrey] Rublev. Those guys are ridiculously determined and very, very professional. It’s not that our guys aren’t — they just need to keep getting better in that facet.”

The last American to win a Grand Slam tournament? Andre Agassi, 17 years ago.

Isner’s cautious optimism is based on the potential of a quartet of U.S. pros who were staples of the ATP’s ongoing Next Gen campaign: Frances Tiafoe, Taylor Fritz, Reilly Opelka and Paul. Fritz is currently has the highest ranking among them at No. 36. Fritz and Paul, both junior Grand Slam champions, performed relatively well at the Australian Open, reaching the third round. Fritz lost to eventual runner-up Dominic Thiem. Paul had a kinder draw, but he was fatigued from his five-set struggle with No. 18 seed Grigor Dimitrov and put up little resistance against No. 66 Marton Fucsovics, who won in straight sets.

Tiafoe and Opelka didn’t fare as well. They both faced daunting opening assignments Down Under, losing to Daniil Medvedev and Fabio Fognini, respectively.

Tiafoe, who has been ranked as high as No. 29, logged his best result at a major at the 2019 Australian Open, reaching the quarterfinals. But he faltered after the Miami Masters, finishing the the year 21-25. He has fallen to No. 79 and has yet to win a match (0-3) on the main tour in 2020 as he tries to breathe new life into his game on the Challenger circuit.

Opelka, at No. 40, is closing on Fritz and No. 39 Querrey. His progress has been steady, but he was winless in four matches going back to mid-October before finally breaking his skid in New York. On Friday night, he was knocked out of the New York Open by Jason Jung.

“It’s almost to be expected,” Isner, the flag-bearer for the American game for most of the past decade, said. “Sometimes it’s easy to come out and play with no pressure the way Frances did to start [his career]. Then you get a little higher ranked and you go from being the hunter to being the hunted. It’s a lot different.”

Citing Opelka’s progress, Isner added, “Reilly got to the point where he’ll be ranked higher than most of the players he goes up against. Playing with no pressure and then playing with expectations are two very different things.”

The members of the younger generation are supportive of each other and enjoy great rapport as a group. Opelka said Paul, Fritz, Tiafoe and Michael Mmoh are his “best friends” and most trusted companions on the tour. As a group, they seem chill, but that doesn’t mean these players are complacent or lazy.

“If people think we’re not putting in the time like the European guys, that’s completely false,” Opelka said. “We’re all working, we’re all dedicated. We’re just not as good as some of those other guys at this point. What can I say about Medvedev, or Karen Khachanov? Those guys are still in another class. Maybe it won’t be true in the future, but right now we’re not in the same realm.”

Some feel the entire generation might benefit if one member went rogue, breaking from the pack to single-handedly set the bar higher. But this group is unique in that it functions almost like a collective. Opelka believes that helps everyone in the group advance, even if progress is accomplished in steps rather than bounds. Each player, Opelka said, has experienced breakthrough moments, but being part of a group has spared each man some pressure.

“The beauty of it is that there’s not just one guy who feels the heat,” Opelka said. “I think we’re in good shape. It’s just the timing that has to be better. We have to wait for Roger [Federer] and Rafa [Rafael Nadal] to come out, maybe get some draws that open up a little more. Then, who knows?”

Lately, the older generation hasn’t been able to provide much inspiration. At age 28, Jack Sock knows all about the pressure of expectations. Once viewed as a potential successor to Isner and even Grand Slam singles champ Andy Roddick, Sock hit a career-high of No. 8 in the fall of 2017. He went into a tailspin soon thereafter and ultimately found his inner champion on the doubles court, rising as high as No. 2. He’s a three-time Grand Slam doubles winner who isn’t currently ranked in singles.

Isner is just one of four men — the others comprise the game’s Big Three — to finish in the top 20 for the past 10 years.

Isner’s main weapon, the serve, is the most age-proof of all shots — but he’s already 34.

“I want to do this as long as I can perform at a high level,” he said. “If my level and ranking drops significantly, it could be good-bye at that point.”

Isner got off on the wrong foot this year, losing all three of his matches at the ATP Cup. He rebounded, reaching the third round at the Australian Open, but a foot injury there ended his tournament. The losses continued at the New York Open, as he was upset in the second round, losing to Jordan Thompson 7-6 (2), 6-7 (3), 6-3 on Thursday night.

Johnson, once ranked No. 21 but now down to No. 75, has had trouble ever since he made the semifinals of Winston-Salem last August. He complied a 16-4 record in Challenger events dating back to October, but he was 0-4 in main tour matches after that until he won his first-round match in New York.

“A win’s a win, and you take them when you get them and hopefully you string a bunch in a row,” he said. “So that’s my goal.”

Sandgren’s run at the Australian Open was a pleasant surprise for U.S. fans. It lifted the 28-year-old Tennessean to the No. 53 ranking. That puts him at No. 5 on a U.S. leaderboard that has a respectable eight men in the top 100. Sandgren said in an interview that he’s embraced the long view, trying to cultivate the kind of professionalism that Isner said the young generation needs to continue growing.

“We can all do better,” Sandgren said. “You have to take advantage of every day and every week knowing that it matters, that it means something to do the right things and put yourself out there in the right way. If the seven or eight guys we’re talking about do that, we could compete for those coveted top 10, 15 spots, we could compete for Slams.”