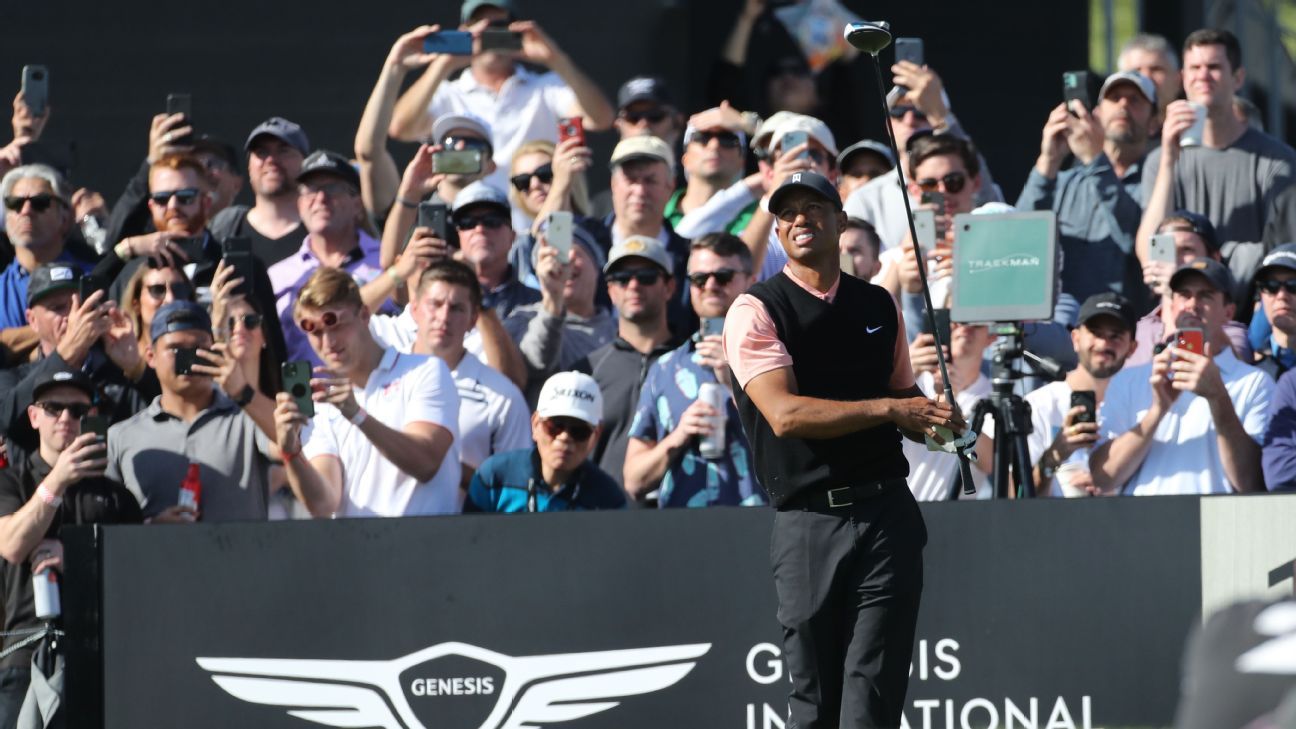 LOS ANGELES — Tiger Woods has had his share of frustration at Riviera Country Club over the years. But Thursday’s first round of the Genesis Invitational offered a different kind of head-scratching for the tournament host.

A strong start, excellent putting, seemingly plenty of opportunities, at least early — followed by an inability to hit the driver in play, which had been the strongest part of his game of late.

Here’s a closer look at Woods’ opening-round 69 at Riviera, which left him five strokes behind tournament leader Matt Kuchar, and in a tie for 17th.

Woods has struggled at Riviera over the years in part due to his inability to get much done on the opening holes. But he was 4 under through eight holes Thursday, including an eagle at the first and two more birdies. It was just the second time he shot under par over the first nine holes in his past eight attempts. And it seemingly put him in a position to be near the lead for one of the rare times here. He hasn’t been inside the top 15 after the first round since 2005.

The driver left him

The best club in his bag going back to the Zozo Championship victory in October has been the driver. Woods, for the most part, has kept the ball in play off the tee. When he missed a fairway, it wasn’t by much. He hit several beauties over the opening holes.

And then it was gone. Woods pulled out the driver at the short 303-yard par-4 10th and blew it way left. He clipped a tree on the 11th hole and had to lay up on the par-5. He hit his only fairway of the back nine at the 12th, but missed the green and made bogey. He pulled his tee shot behind a tree at the 13th, had to lay up and then got up and down for an unlikely par.

At the par-5 17th, he found a fairway bunker and needed to two-putt from 70 feet. And then he blew his drive way right at the 18th, a somewhat lazy-looking swing that led to a second bogey.

“I was trying to piece it together on the range and I did a good job of figuring out how to make solid contact and get the ball heading in the right direction,” he said. “Was able to get off to a quick start there with a 3. A lot of good shots on the front nine. The ones I did miss today were generally left and I obviously didn’t hit them right.”

Hosting duties have an impact

Tiger Woods reacts to sinking an eagle putt that measured 24 feet, eight inches and reflects on how Kobe Bryant will be remembered.

Woods arrived in Southern California on Monday. He took part in a charity event at Riviera but did not play, only hitting a few putts. On Tuesday, with numerous media obligations and foundation responsibilities as host of the Genesis Invitational, Woods did not practice or play. His only time on the range was a few minutes before his 6:40 a.m. tee time for the pro-am on Wednesday. It’s fair to say that the idea of hosting a tournament and playing top-level golf do not necessarily go together at this point in time for Woods.

“I haven’t had a whole lot of time to practice this week; I’ve been a little bit busy,” he said. “First time I saw the range was [Wednesday] and that was for about 10 minutes and that was warming up for the pro-am. I really haven’t hit a lot of balls this week. Just trying to get a nice movement pattern, trying to shape some shots. I was able to start feeling that, start shaping shots on the range and said, hey, just keep this thing going on the front nine. Well, for all 18 holes, and I only did it for the front nine.”

It was curious that Woods did not find some time to practice on Tuesday, a glorious, sun-splashed day at Riviera. He did do extensive work at home last week, and has been testing the new Bridgestone ball he started playing with at Torrey Pines. But it is true that Woods was not grinding to get ready while on site.

Perhaps the light practice is due to the fact that Woods knows he is playing at the WGC-Mexico Championship next week? It’s a good theory, at least. After the round, Woods said he has yet to decide on the World Golf Championship event where he tied for 10th a year ago. He needs to have a decision by Friday.

The quick turnaround to Friday’s second round is a mixed bag. While he won’t have much time to work on his swing before a 7:15 a.m. PT tee time, he’ll get pure greens. And Woods likes early starts.

“Considering I’m still on East Coast time, I kind of like it,” he said. “I’ve been getting up pretty early, so it will be a quick turnaround, get back at it. Hopefully we’ll have a bit smoother greens out there on the golf course. Hopefully I can hit it as good as I did on that front nine to give myself a number of looks for the entire 18 holes, not just nine holes.”

It almost defies belief that Woods’ approach to the first green stopped 24 feet, 8 inches from the cup — and that he made the putt for eagle. Those are the retired uniform numbers of the late Kobe Bryant. Woods also birdied the eight hole, which had a gold and purple flag in honor of the Los Angeles Lakers great.

“It’s ironic, isn’t it?” Woods said. “It was a nice way to start. I didn’t know about the putt being that long. Ironic having those two numbers. And then No. 8, happened to hit one in there close and had a nice little kick-in there for birdie.

“Know matter what we do, I think for a while we’re going to always remember Kobe and what he meant, and especially here in SoCal and the entire sports world. Like I said, very ironic that I happened to have those numbers on those holes and those exact measurements.”