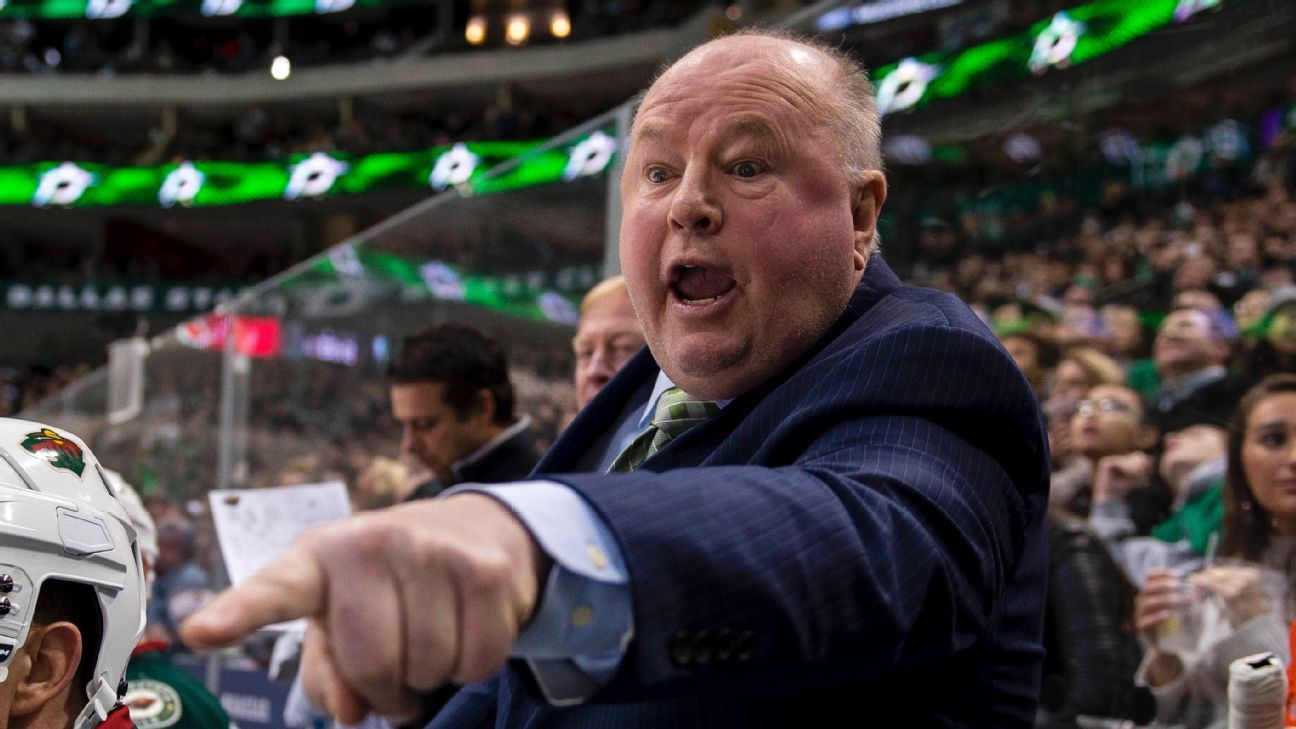 Bruce Boudreau’s tenure with the Minnesota Wild has come to an end.

The coach went 158-110-35 with the Wild, making the playoffs in his first two seasons but losing in five games both times. In 13 seasons as a head coach with the Washington Capitals, Anaheim Ducks and the Wild, Boudreau is 567-302-115, having made the playoffs in 10 of those seasons.

Let’s examine what led to the firing, and where the organization and the coach go from here, both in the short and long term.

The Wild are three points out of a playoff spot. Why fire Boudreau now?

That’s the question the hockey world is asking at this point. Boudreau’s Wild (27-23-7) were 7-3-1 in their last 11 games, and had miraculously moved within three points of a wild-card spot with three games in hand on Arizona, in the parity-laden Western Conference.

He was fired the morning after an embarrassing loss on home ice, blowing a 3-1 lead in a shootout defeat to the Rangers. Once again, the Wild failed to dictate terms in their play. “We need 18 players and a goalie to play great,” Boudreau said after the game, “and we didn’t have all 18 players playing at their best [Thursday].”

GM Bill Guerin said on Friday after the firing that in “tighter game situations,” he felt the Wild could be better, and cited that loss to the Rangers.

Keep these factors in mind. GM Bill Guerin is the second general manager to inherit Boudreau after he was hired by Chuck Fletcher in May 2016. Boudreau survived Fletcher getting fired and Paul Fenton getting hired, and then survived (for half a season) when Fenton was dumped for Guerin. Every general manager wants “their guy” behind the bench, and Boudreau was not Guerin’s guy: Not only did he not hire him, but he never was in an organization with him before.

Also, Boudreau was in the last year of a contract that reportedly paid him over $3 million per season. The Wild’s success was just prolonging the inevitable, which was that the Wild were going to have a Guerin-selected coach after this season.

But if the question is “why, just three points out of a playoff spot,” Guerin said, “the timing was right to do it now. … The most important thing is that the players are going into this stretch run on a high and I felt like they needed a different voice right now.”

Was there a specific short-term cause for the firing?

It’s become cliche in the NHL, but show me a coach that was fired for on-ice reasons and I’ll show you goaltending that stunk. Of the bottom 10 teams in save percentage this season, six of them have made coaching changes: San Jose (29th), New Jersey (28th), Nashville (27th), Minnesota (25th), Vegas (24th) and Toronto (23rd). The other two teams to make coach changes — Dallas (2nd) and Calgary (11th) — made theirs for off-ice reasons.

The Wild have a team save percentage of .897, down from .904 last season (21st) and way down from 2017-18 (.911, 9th), which not-all-that-coincidentally was Boudreau’s last playoff appearance. Part of this season’s struggles was the performance of Devan Dubnyk, who took a leave from the team earlier this season to be with his wife as she battled a health issue. In 27 games, Dubnyk has a .320 quality starts ratio and a minus-12.64 goals saved above average. “It’s been an extremely difficult year in just about every way possible,” he told the Star-Tribune this month.

Some teams have a bad save percentage because of what’s happening in front of the goalie. That wasn’t the case in Minnesota.

Boudreau’s teams are always good offensively, and the Wild were 17th in goals per game (3.07). But they were 24th in goals against (3.19) per game, thanks in part to the second worst penalty kill in the NHL this season. Yet some of their underlying numbers were impressive: The Wild had the sixth best expected goals ratio in the league at 5-on-5 (52.67), thanks to the best expected goals against (86.64) in the league.

In other words, the way the team was playing defensively at even strength should have had them much better than 24th in overall defense, which is a product of sub-average goaltending and disastrous special teams play. Ask Peter Laviolette how that works out for a coach.

Who is taking over as the interim coach?

Dean Evason, 55, is the interim head coach for the Wild, and he knows this roster quite well. He’s been an assistant coach in Minnesota for two seasons under Boudreau. He was previously head coach of the AHL Milwaukee Admirals, the Nashville Predators‘ top affiliate, for six seasons where he posted a 242-161-53 (.588) record. He was also a head coach for six seasons in the Western Hockey League. Interestingly, Evason’s first NHL gig was as an assistant coach with Boudreau during his time with the Washington Capitals. When Boudreau was fired there, Evason was retained as an assistant under Dale Hunter.

While this is just an interim job (for now), it’s one that Evason has worked hard towards for over a decade. Guerin said Evason will be a candidate for the permanent job.

What kind of on-ice changes should we expect?

It’s tough to say. Evason was a journeyman forward in the NHL from 1983-84 to 1995-96, tallying 372 points and 1,002 penalty minutes with the Capitals, Hartford Whalers, San Jose Sharks, Dallas Stars and Calgary Flames. He’s coached the forwards as an assistant coach during his NHL career.

The biggest challenge for Evason — besides copious amounts of prayer that the goaltending solidifies — is lighting a fire under the Wild players that were too pedestrian under Boudreau. Guerin said that Evason will be able to “hold the players accountable” that he feels need to be held accountable.

Despite the Wild’s trade of veteran forward Jason Zucker to the Pittsburgh Penguins this week for a pick, a top prospect and Alex Galchenyuk, Guerin believes the playoffs are the target. And those players that might not have been playing their best for a lame-duck coach are now reminded that they’re no longer playing for him — they’re playing for Guerin.

I think Fox Sports North analyst Tom Chorske — who won a Stanley Cup as Guerin’s teammate in New Jersey — was onto something in his comments about Boudreau’s firing: “I think a sizable element of letting [Bruce] go is that the responsibility of the team making the playoffs now sits squarely on the players’ shoulders. Now they’re all on the ‘hot seat.'”

If you’re Bill Guerin, and you’re tasked with trying to figure out who stays and who goes from this Wild roster, this could be the most effective evaluation process. At least for a new general manager.

Does Evason have a legitimate shot at the permanent gig, or will a “big name” get hired this summer?

Guerin said Evason would be a candidate, and obviously playoff qualification and any postseason success would play into his favor. “Dean is a guy who has a good grasp on [the team],” Guerin said.

But it’s hard to ignore how many big name coaches are available right now: Laviolette, who posted a .616 winning percentage with the Predators in six seasons; as well as Gerard Gallant, who coached the expansion Vegas Golden Knights to the Stanley Cup Final in 2019 and posted a .601 winning percentage in two seasons there. Keep in mind that Gallant was an assistant with the New York Islanders when Guerin played for the organization.

Mike Babcock, the former Toronto Maple Leafs head coach who has coached 10 100-point teams and has a Stanley Cup to his credit, could be in the mix — although he would have to address concerns about his abusive coaching style that came out after Toronto fired him.

Then there’s Doug Weight, a close friend of Guerin’s and his former teammate with the Islanders. Weight coached two seasons for the Islanders in 2016-17 and 2017-18, failing to make the postseason twice. But as we’ve seen in the NHL, personal relationships go a long way in decision making.

We’re 10 days out from the trade deadline. Does this alter the game plan for Bill Guerin?

No. Guerin is in the process of trying to remake this roster in the image he wants from it. Minnesota has to be considerably younger to circle back to true championship contention. Trading Zucker was a move for the future. The Wild only have two unrestricted free agents this summer, in Galchenyuk and Mikko Koivu. Guerin’s going to have to be aggressive to change the configuration of this team, given how many players have term. That could start at the trade deadline.

What’s next for Bruce Boudreau?

If history tells us anything, he might have a new job by the time you finish this sentence. The Wild hired him eight days after the Anaheim Ducks fired him. He was hired by the Ducks just two days after the Capitals fired him.

Yet it could be different this time for Boudreau. There’s no arguing against the fact he’s one of the most successful regular-season coaches of the last 20 years, with a points percentage of .635. But this could have been his second straight season outside the playoffs, and his teams haven’t advanced past the first round in four of their last six postseason trips. Plus, there’s a lot of competition out there among coaching candidates, and he just turned 65 years old in a league that’s trending younger: Of the last 11 coaches named head coach for their teams, only Rick Bowness of the Dallas Stars is over 60, and that was an interim hire after coach Jim Montgomery‘s dismissal for off-ice issues.

That said, the underlying numbers show Boudreau’s system can produce results with the right personnel. One can’t imagine he’ll be out of work for long.

Grade the decision (and the timing).

The decision is a B+, the timing is a C. And yes, I understand that sounds strange. While Guerin wouldn’t confirm it, one has to assume Boudreau wasn’t getting another contract with a GM that didn’t hire him. So rather than delaying the inevitable, and while watching some of his players not giving their best efforts for a lame-duck coach, he decided to make the move before the end of the season. But, again: If the playoffs are the goal, and the team is on a 7-3-1 roll under Boudreau, the timing of this move just seems really strange. To wit, the Wild had a 1-5-1 stretch around Jan. 1 that included three home losses, bringing their record to 20-20-6. Why not then?

Why we could have to wait until 2024 to see Artur Beterbiev vs. Dmitry Bivol in a must-see matchup
Formula 1: Ford to team up with Red Bull after 22 years out of the sport
Wales opt for experience in 6N opener vs Ireland
Fantasy 30: Updates on Kyrie Irving, Jayson Tatum and Tyrese Haliburton
Jones: McCarthy to call Cowboys’ plays in ’23