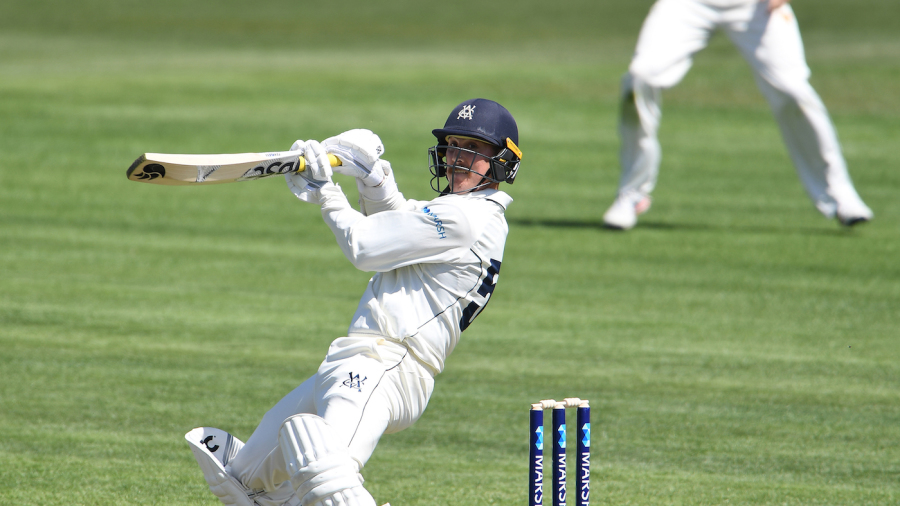 Nic Maddinson fell five short of a century but shook off his Big Bash struggles and returned to the type of Sheffield Shield form that earned him an Australia A call-up earlier this season as bottom-placed Victoria enjoyed a solid opening day against runaway leaders New South Wales at the SCG.

Maddinson missed the chance for his second Shield hundred of the season when he charged and missed at Steve O’Keefe to give the left-arm spinner his 300th first-class wicket. Nathan Lyon worked his way into Victoria’s middle order but Seb Gotch‘s half century consolidated their position alongside Travis Dean, who returned to the crease having earlier retired hurt when he was struck in the box, in an unbroken stand of 74.

Maddinson withdrew himself from the squad to face Pakistan A in November to take a mental health break but returned to action before the Shield stopped for the BBL reaching the mid-season break with 448 runs.

Across 14 BBL innings for the Melbourne Stars he managed just 143 runs, but there was no hang over as he switched the green kit back to a white one. After arriving in the eighth over, when Marcus Harris was pinned lbw by Harry Conway, he was unsurprisingly tested by a few short deliveries but was quickly onto the pull and came through unscathed on a surface that did not have a huge amount of pace.

He lofted Lyon’s fifth ball straight for the six as he and Peter Handscomb, who looked in very good touch before he was lbw on the back foot, allowed Victoria to skip along at four an over after a careful start against the accuracy of Conway and Trent Copeland.

Dean had been forced to retire hurt on 11 during the morning session when he was struck in the box by Copeland. He struggled to stand for a significant period of time before carefully walking off the field with the doctor and physio.

Lyon chipped away at Victoria’s middle order, either side of Maddinson being stumped, as he had Matt Short lbw, also on the back foot, and Will Sutherland slog-swept to midwicket. At 5 for 244, New South Wales might have had visions of keeping Victoria to around 300, but Gotch stood firm with a 128-ball half-century.

Having scored 233 off the 63 overs until tea, the final session was more of a grind for the visitors as they added 85 off 33 overs.