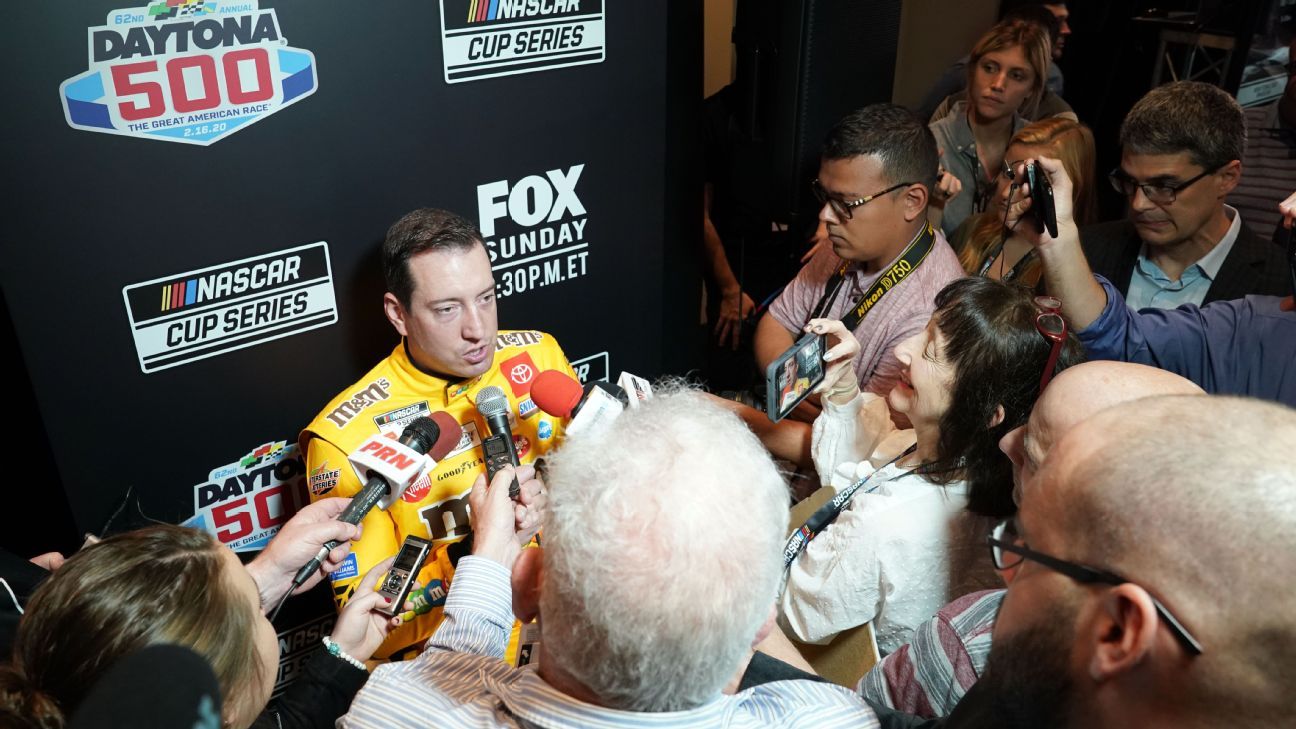 DAYTONA BEACH, Fla. — As the sun rises over Daytona and a new NASCAR season, there is still a hint of the golden hues from last week’s Academy Awards in the atmosphere. Perhaps that is why, as Kyle Busch blew into the World Center of Racing for Thursday night’s 150-mile Daytona 500 qualifying races, a quote immediately came to mind from the 1983 cinematic classic “Stroker Ace.”

The words, uttered by Handsome Harry Gant, as his Skoal Bandit machine was being wrecked: “Oh hell, here we go again.”

Why? Because a Daytona 500 victory is still the last piece of history missing from that career.

“I suppose if that’s all you’ve got, then I am doing pretty good at this, right?” the 33-year-old said Wednesday. “There used to be a list of stuff that people said I couldn’t do right or I was never going to do. Well, okay, we’re down to one now.”

The last time we saw Busch preparing for a points-paying NASCAR Cup Series race, there were two blemishes left. But he erased the other one that weekend, clinching the Cup title here in Florida last November at Homestead-Miami Speedway. Until then, the Kyle Busch haters could still say he had won “only” one championship.

Now, all they have left to take jabs at is his absence from the Harley J. Earl Trophy. And he’s cool with that. He even thinks it might help drum up a little extra interest in Sunday’s race.

“It’s attention to the sport, which is good for all of us. Me not being able to win the Daytona 500 isn’t something that’s going to kill me. But it is certainly going to weigh on me in the late-goings of a race to try to get out there and win this thing.”

He nearly pulled it off one year ago, easily the closest he has come. He was in the lead in the closing laps, but had to settle for second behind Joe Gibbs Racing teammate Denny Hamlin. His only other near-miss was all the way back in 2008, his first year with JGR. He and new teammate Tony Stewart were outdueled on a restart by winner Ryan Newman and his Penske Racing teammate, Busch’s older brother, Kurt.

Aside from those two races, he has never really been a threat. He has had fast cars but cracked the top five only five times, and until last year had never finished better than fourth.

So, Sunday will mark Kyle Busch’s 15th start in the Great American Race, and he is 0-for-14. Not only is it not the longest Daytona 500 winless drought suffered by a NASCAR Hall of Famer (and make no mistake, he will roller skate into that hall the moment he becomes eligible), it’s not even near the top of the list.

Stewart, who went into the Hall just two weeks ago, won 19 races at Daytona International Speedway, but was 0-for-17 in the 500. Terry Labonte, Mark Martin and Rusty Wallace finished a combined 0-for-85. It took David Pearson 15 tries before he finally won it, Darrell Waltrip needed 17, Buddy Baker cracked his 0-for-18 goose egg in 1980, and Dale Earnhardt, the most famous slump-buster of them all, won in his 20th try in 1998.

Each one of those legends took their turns as “How has he never won the 500?!” guy, facing the same questions Kyle Busch faces now. At one point, that guy was his brother, who finally won NASCAR’s most coveted one-day prize in 2017, in his 17th start.

“I think his real goal now is to make sure he wins it in fewer tries than it took me,” Kurt Busch said jokingly. “It wouldn’t be the first time that his goal was to do something earlier than I did. And by the way, he has managed to pull off most of those goals.”

No matter what does or doesn’t ultimately happen when it comes to Kyle Busch at Daytona, he has already reached goals that only the tiniest handful of racers have accomplished over NASCAR’s 70-year history. His 56 Cup Series wins rank among the top 10 all-time. He is also the all-time wins leader in both the Xfinity Series and Camping World Truck Series. He ranks 10th in career laps led (17,432), 11th in second-place finishes (50) and 15th in top-five finishes (200).

During Wednesday’s media session, he was very funny and very cocky. When the topic of the 2021 “Next Gen” NASCAR racecar was brought up, he went from zero to angering NASCAR brass in 30 seconds flat, speculating that the new car, ballyhooed as a cost-cutter, will actually cost four times the amount to build vs. the current car. (NASCAR immediately disputed that proclamation.) When asked about his place in NASCAR history as one of the greatest of all time, he said, flatly, “It’s not for me to decide.” But when he was asked who the current best driver in NASCAR is, he said “You’re looking at him.”

“The whole aspect of having one item not checked is not that big of a deal. It’s not going to end my career by any means … but we’re in a good spot and we’ve got a shot. We’ve got to put ourselves in a good spot at the end like last year and try like hell.

“Hopefully we can get it done this year or whenever, sometime or another, before it’s all said and done for myself to be able to at least have one.”