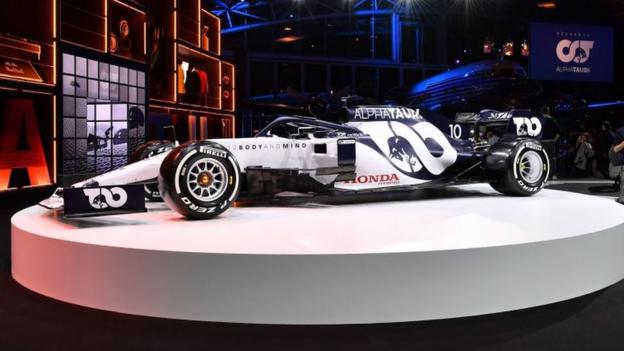 Red Bull’s junior team has been rebranded as Alpha Tauri for 2020.

The former Toro Rosso team is now being used to promote a new clothing line produced by the drinks giant.

Team boss Franz Tost said the outfit was targeting a place in the top five of the constructors’ championship.

Last year they were sixth, as drivers Daniil Kvyat and Pierre Gasly each scored a podium, their first top-three finishes since Sebastian Vettel’s victory in Italy in 2008.

Gasly was demoted from the senior Red Bull team halfway through last season but impressed on his return to his former home. He said: “I’m feeling super-good, really excited.

“We finished the season really well with the podium in Brazil. We need to keep the momentum, the team is super-motivated and we will try.”

Also on Friday, as well as Mercedes unveiling their new car at a private test at Silverstone, the Alfa Romeo team ran their 2020 model for the first time in a one-off livery at Ferrari’s Fiorano track.