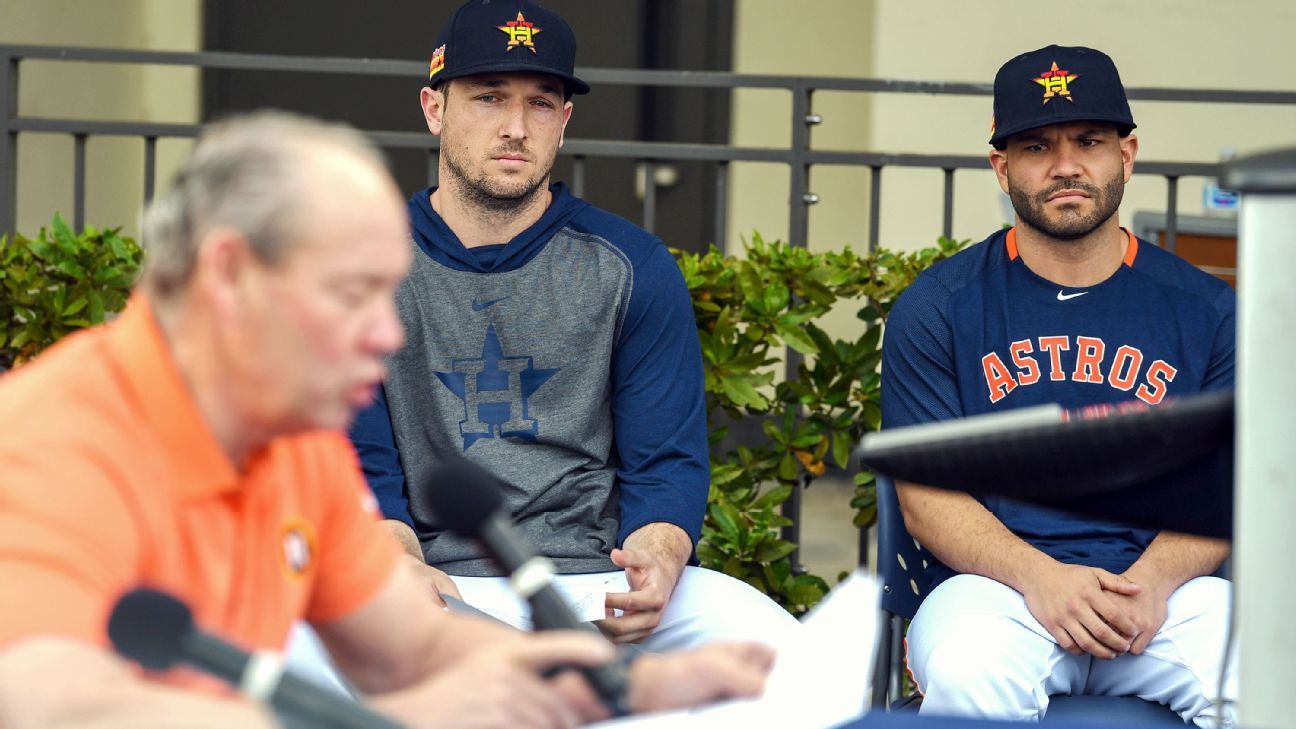 WEST PALM BEACH, Fla. — Houston Astros owner Jim Crane’s latest attempt at damage control blew up in spectacular fashion Thursday. In the span of 27 minutes at a news conference, he claimed his team’s routine cheating during its 2017 championship season didn’t impact the game, declared he shouldn’t be held accountable for the organization he runs, used commissioner Rob Manfred’s report on the Astros’ malfeasance as a binky and so often repeated talking points that the Apology.exe program he tried to install in his head looked as if it were glitching. The entire charade devolved into a glorious conflagration, Crane’s mouth a veritable fountain of lighter fluid.

It didn’t have to go this way. It wouldn’t with most other organizations. But these are the Astros, and they make Everests out of molehills. Their fall is so spectacular because their pride was always outsized, and the latest example unfolded at their spring training complex on a day that should have been more about healing than hubris.

Crane cannot help himself. He hired a crisis PR firm, according to sources, but seemed to forget the PR part. Amid his attempts at apologizing were clear signals that his contrition went only as far as his ability to absolve himself of wrongdoing. And the more Crane spoke, the more his words served as a spade, digging a hole from which he couldn’t rescue himself.

It’s best to begin with the most absurd moment of the day, in which Crane — endeavoring to explain away the Astros’ illicit use of a center-field camera to decode catchers’ signs that were then relayed via banging on a trash can to alert hitters as to the pitch type about to be thrown — said with a straight face: “Our opinion is that this didn’t impact the game.”

When pressed on what exactly he meant by that, Crane said: “I didn’t say it didn’t impact the game.” He had, of course — 60 seconds earlier, for those curious about the capacity of Crane’s short-term memory. And it did, clearly, as his team’s shortstop, Carlos Correa, would later admit.

“It was definitely an advantage,” Correa said, one of many honest decrees offered by Astros players to reporters after Crane spoke. Outfielder Josh Reddick, when asked about remorse, copped to not feeling it until The Athletic’s November story that laid bare the Astros’ scheme — a real sort of admission that follows the logical path of this scandal: the Astros thought nothing of their cheating until they were caught. Redemption starts with an honest self-assessment of damage done by one’s actions, and Astros players are not irredeemable people. They cheated at a game. It is wrong, and it is disappointing, and it is unfortunate. It is a transgression with clear casualties — those whose careers were ended, livelihoods altered and lives changed. It will chase them, and rightfully so. But it is no mortal sin.

Doug Glanville argues that the Astros’ response on Thursday to the sign-stealing scandal wasn’t enough and begs the question on how much they will actually reveal.

What’s indefensible is asking for forgiveness while not abiding by its path. Crane zigzagged around his Thursday. His ruminations on accountability were particularly rich. He mused that Major League Baseball’s suspension and his firing of general manager Jeff Luhnow and manager AJ Hinch served as satisfactory pounds of flesh because, though neither was responsible for implementing the scheme, both were responsible for overseeing the team’s baseball operations. Never mind that Crane, as the team’s owner, was responsible for overseeing Luhnow and Hinch.

“No,” Crane said, “I don’t think I should be held accountable.”

Such a bastion of accountability then suggested he was the one to keep the Astros on the straight and narrow going forward. Seven times he said: “This will never happen again.” When asked why someone who wasn’t taking responsibility for it happening on his watch the first time deserved the benefit of the doubt, Crane didn’t outline a plan or offer the sort of transparent answer such a benefit demands. He did what the Astros always do, which is speak in platitudes, generalities, opacity.

“I’ll make sure I have someone that’s accountable moving forward and will be checking constantly,” he said. “We’ll have controls in place to make sure it doesn’t happen again. And again, if I’d have known about it, I’d have done something about it. But I’m not in the locker room. I’m not down in the dugout. So it was very difficult, and I didn’t know about it until November, just like you guys.”

I happened to be one of those guys, and I knew about it long before November. I first heard players accuse the Astros of cheating in mid-2017. For the next year, I tried to find someone who would speak about it on the record. Nobody would. The code of silence in baseball buries countless secrets.

Then came the 2018 postseason. During the American League Division Series, a man named Kyle McLaughlin, whom Crane brought into the Astros organization, was caught pointing a cell phone toward the Cleveland Indians‘ dugout from an on-field camera well. He was removed from the area. The Indians warned the Astros’ AL Championship Series opponent, the Boston Red Sox, about McLaughlin, and during Game 1 of the ALCS, he was again removed from a camera well next to the dugout.

I wrote a story about the McLaughlin incidents, and in it, I reported that the Oakland A’s had accused the Astros of relaying pitch types to batters during an August series. Further, I reported, two major league players had said they witnessed the Astros hitting a trash can in the dugout as a way to alert hitters.

Again: This was in 2018, more than a year before Crane claims he learned of the issue. The day after the story ran, Crane told another reporter to leave McLaughlin’s name out of his story. Clearly Crane knew that a story about McLaughlin had been written. Either he learned of the story’s details or avoided them altogether. The former would make him a liar. The latter would make him an owner who ignores potentially injurious information about his billion-dollar business.

For someone with such a commitment to doing things right going forward, Crane’s lack of curiosity is quite curious. When asked when the Astros’ cheating stopped, he said: “I didn’t do the investigation.” When asked about the culpability of Carlos Beltran, the player who alongside former Astros bench coach Alex Cora implemented the trash-can-banging scheme, he said: “Again, I didn’t do the investigation.” If Crane can’t be bothered during the worst cheating scandal in a century to look beyond Manfred’s report — which he referenced nine times, as if it were some sacred scripture — how, exactly, does he expect to fix the institutional rot in his organization? Crane, after all, still denies there’s a problem with the Astros’ culture. Perhaps his mirror is just broken.

Did the Astros get what they deserved? How aware were opposing players? Here’s what those around the game told us.
MLB players, execs on sign-stealing scandal

The gap between words and actions is cavernous, and the Astros’ history is big on offering the former and skimping on the latter. They said they had a zero-tolerance policy on domestic violence. Then they traded for closer Roberto Osuna as he was serving a suspension for a domestic incident. They tried to smear a Sports Illustrated reporter who wrote that their assistant GM, Brandon Taubman, had punctuated a pennant-winning celebration by yelling toward a group of female reporters: “I’m so f—ing glad we got Osuna!” Then they doubled down on it before realizing what was obvious from the beginning: The report was accurate.

And here they are now, desperately clinging to this notion that they aren’t a dysfunctional mess, that Crane is indeed the person to shepherd the Astros through a period that even for the most stable organization would prove trying. He sat at a table out in the Florida sun and said that because Manfred offered players who participated in the scheme immunity from punishment by the league in exchange for the truth, they were, in his mind, absolved of wrongdoing. Those same players, minutes after Crane finished talking, conceded just how wrong they were.

“I think I’ve done just about everything I can,” Crane said.