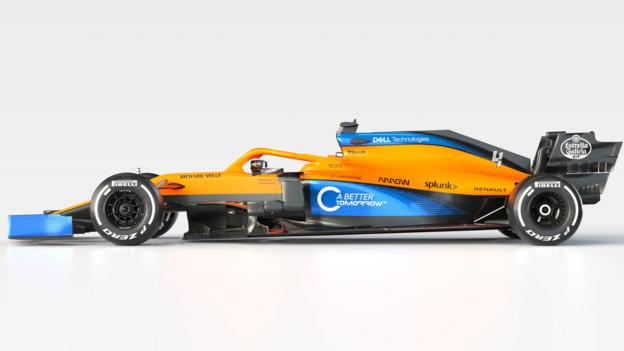 McLaren have unveiled their new car with the ambition of continuing the progress they showed last year.

In 2019, they were the fastest team behind Mercedes, Ferrari and Red Bull and finished fourth, two places better than in 2018.

Team boss Andreas Seidl said: “It is important to keep the positive momentum up and move forward as a team.

“It is a reset. I am very happy with development. We can be quite optimistic but we have to be realistic as well.”

The new MCL35 retains McLaren’s historic papaya orange colour scheme, re-adopted in 2017, but has switched it for a matt finish, following a trend set by Red Bull and Ferrari.

An evolution of last year’s design, the car has a noticeably narrow nose and pinched rear end in the pursuit of maximum possible aerodynamic downforce.

McLaren continue with their youthful driver line-up of Spaniard Carlos Sainz and Briton Lando Norris, both of whom impressed greatly in 2019.

Sainz, who in Brazil last November scored McLaren’s first podium for five years, said: “We have managed to put together a better car. I have the feeling everything is coming together a lot better. We have a positive momentum and we want to carry that forward.”

Norris, who was an impressive debutant in 2019, said: “It is a base. It was made last year. All our comments and discussions as been put into this. It is a lot more of my car. We have had the input of making this, so it feels a bit more my baby.

“I was pooping myself a lot last year, especially at this point, whereas now I am lot more confident and more relaxed and that just prepares me better for the season.”

It is the first car fully produced by McLaren under Seidl, who joined in May last year, and new technical director James Key, who started in April and was previously at Toro Rosso.

Seidl added: “Everyone has the same ambitious targets. We have to focus on ourselves.

“We are all racers. We all love the sunrises at race tracks. I’m looking forward to going on track again. We have only six days of testing, so it is important to get some decent mileage. We have done our homework. I feel ready.

“There are a lot of things that make us optimistic, but at the same time we have to be realistic [about] what is achievable from one year to the next.”

McLaren will face stiff competition in the upper midfield, with a group of teams targeting their fourth place. Chief among those will be the factory Renault team, who supply engines to McLaren.

McLaren Racing chief executive officer Zak Brown said: “The gap to third is still very big in F1 terms. We have to be realistic, we hope to close that gap. The first thing we have to do is not go backwards, which is not easy as we have a lot of competition.”

Key added: “The medium-term target is to maintain our position and close the gap and build on that.”

Pre-season testing starts in Spain on 19 February, with the first grand prix in Melbourne, Australia on 13-15 March.