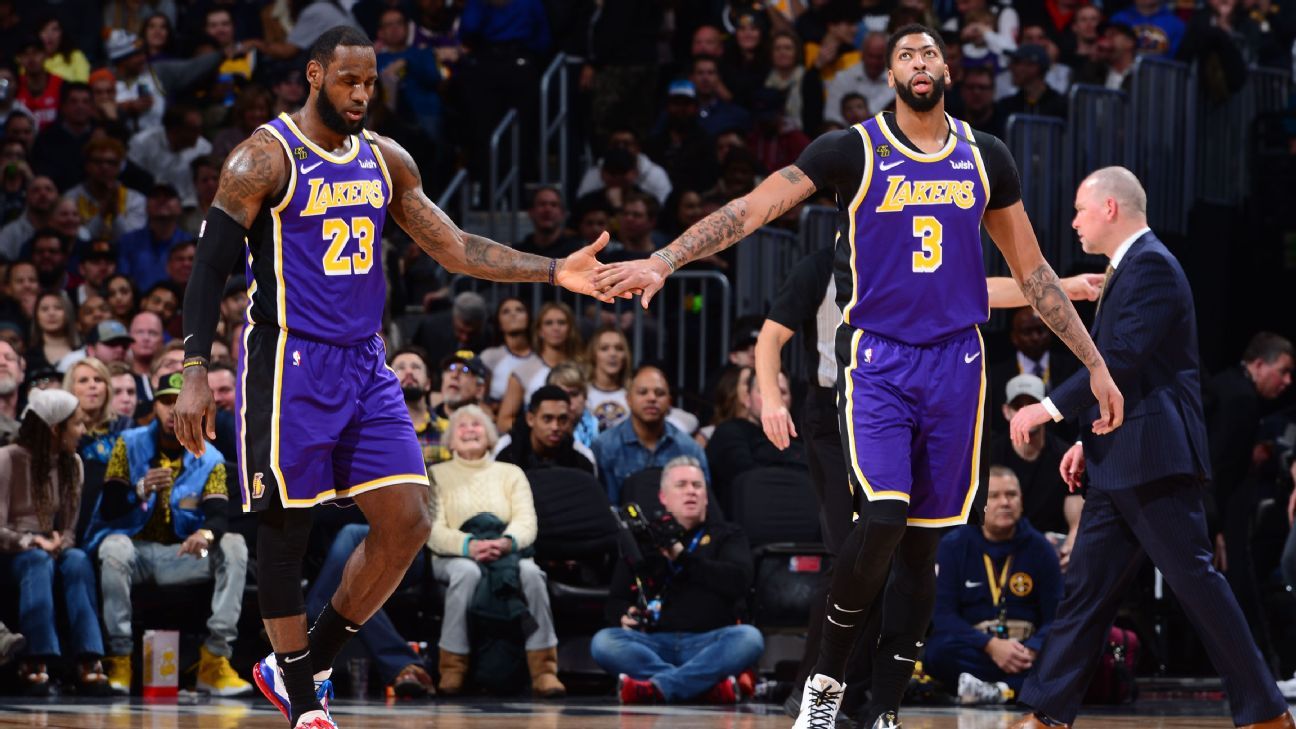 DENVER — The Los Angeles Lakers increased their stranglehold on the Western Conference’s No. 1 spot with an impressive road win against the Denver Nuggets on Wednesday, but LeBron James claims seeding isn’t a topic of conversation for L.A.

“We don’t talk about it,” James said after the Lakers’ 120-116 overtime win gave L.A. a four-game lead over the Nuggets heading into the All-Star break. “For us, we would love to play in front of our home fans as much as we can. We love being there with our Laker faithful.

“But at the end of the day, you go out and play each and every game like it’s its own game. You can’t worry about what could happen the following day. You can only look at the present, like we did tonight.”

Maybe James didn’t need to say anything to let his team know the significance of the Denver game. Several of his teammates noted his serious tone in the pregame locker room, suiting up in his uniform 80 minutes before tipoff — far earlier than usual — to show his level of preparedness.

James went on to lead L.A. with 32 points, 14 assists and 12 rebounds to notch his 12th triple-double of the season and keep pace with Luka Doncic of the Dallas Mavericks for the league lead. It was his 20th triple-double since joining the Lakers, making him just the fourth Laker in team history to record that many for the team, joining Magic Johnson, Elgin Baylor and Kobe Bryant, according to the Elias Sports Bureau.

James, Anthony Davis and the entire coaching staff will head to Chicago for All-Star weekend, taking the court in Sunday’s main event. Dwight Howard will also make the trip to compete in the dunk contest Saturday night. Several other players, including Kyle Kuzma and Troy Daniels, will also face cold conditions to complete promotional obligations.

When the team returns, it will be a six-week sprint to the postseason, as the Lakers franchise is all but assured to make the playoffs for the first time since 2013.

And James likes where L.A. is at.

“We are where we need to be,” he said. “We’ll come back off the break and get ready for the final stretch of the regular season. You don’t put too much into it. You understand you played some good basketball along the way, played some not good basketball. But you want to continue to get better and continue to trust the process. We look forward to when we get back, getting back on the floor and see how far we’ll continue to grow.”

Davis had one of his best games as a Laker on Wednesday, single-handedly outscoring the Nuggets 7-5 in overtime en route to a final line of 33 points,10 rebounds, two blocks and two steals.

He said the Lakers reclaimed their edge before the layoff, and they did it in what several players described as a “playoff atmosphere” when looking back at in in the postgame locker room.

The Lakers are now 10-5 against teams with better than .500 records, including 2-1 against the Nuggets, with both wins coming at the Pepsi Center and the loss occurring in a game James sat out.

“I think in a way, they’re already defeated, seeing that we already beat them twice on their own court,” Avery Bradley said. “I’m just happy we were able to get the job done.”

There are still questions for the Lakers to figure out, such as whom L.A. could target on the buyout/free agency market to boost the roster, or how certain players roles could expand or diminish — Frank Vogel called Alex Caruso his “secret weapon” Wednesday and said he’s pondering more minutes for the physical guard — or even how the emotional baggage from Bryant’s death will manifest itself in the team.

But all things considered, it’s hard to imagine a better on-court performance from the Lakers through the first four months of the season — both in terms of the standings and when it comes to how everyone can stand each other.

“There’s never been egos on this team,” Caruso said. “I mean you can see it in the videos and pictures, that’s not fake chemistry. It’s not phony. We’re not just doing it because there’s a camera in front of us. We genuinely enjoy hanging out with each other, cracking jokes and then playing basketball.”

Vogel said it’s on his team to carry the same focus after the break.

“I like the commitment we’ve shown to stay in the moment, to be great every time we touch the floor, because that builds habits that will win for us in the playoffs,” he said. “There’s still areas we can still definitely improve and we’ll continue to work on those.”