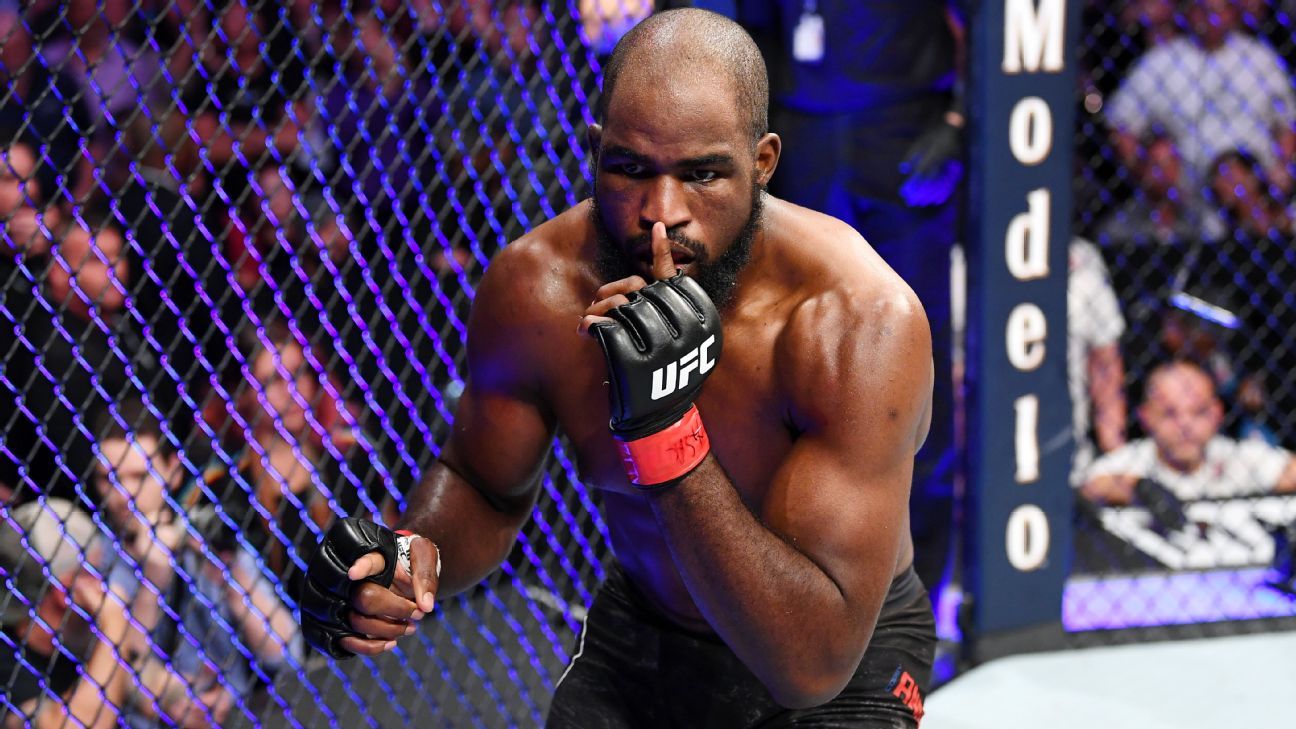 When Bruce Buffer announces the winner of Saturday night’s UFC Fight Night main event in Rio Rancho, New Mexico, will he be naming the next challenger for light heavyweight champion Jon Jones?

That is the most compelling storyline surrounding the Corey Anderson vs. Jan Blachowicz rematch.

Jones is coming off a controversial title defense against Dominick Reyes in UFC 247. Many believe the judges erred in handing Jones the unanimous decision and that Reyes deserves an immediate rematch.

ESPN’s Ariel Helwani believes it will take nothing short of an impressive stoppage for Saturday’s winner to jump ahead of Reyes for another shot at Jones, that is assuming Jones doesn’t jump to heavyweight.

There’s a lot to consider as Anderson tries to win his second straight against Blachowicz. ESPN’s panel of Brett Okamoto, Marc Raimondi and Jeff Wagenheim try to make sense of it all.

Should the Anderson vs. Blachowicz winner land the next title shot, or should Reyes get an immediate rematch?

Okamoto: Reyes rematch. And as you may know, this is a different answer than the one I gave on fight night. On Saturday, in Houston, I wrote the UFC should move on and book Jones to the winner of this fight between Anderson and Blachowicz (both of whom have been very impressive as of late, and deserve a shot) … but after rewatching Jones vs. Reyes, I’ve changed my mind. I scored the fight 48-47 in favor of Reyes, and actually feel pretty strongly about it. Jones is amazing, and still the greatest fighter of all time. But I believe he lost that fight — and obviously, I’m not the only one. Reyes 100 percent deserves a rematch.

Raimondi: It’ll probably come down to how either Anderson or Blachowicz wins. If Anderson does what he did against Johnny Walker at UFC 244 in November and KOs Blachowicz in the first, then it would be hard to say Anderson doesn’t deserve that shot. Same thing for Blachowicz. If he gets Anderson out of there quickly, he should get the nod. Anderson has won four straight coming in and Blachowicz has won six of seven. On paper, the winner does deserve a title opportunity.

However, if the fight looks anything like Blachowicz’s extremely forgettable bout against Jacare Souza back in November, it’ll be hard for the UFC to resist the temptation of giving Reyes an immediate rematch. The UFC is a business after all, and a Jones-Reyes rematch is more marketable than the alternatives in this case.

Wagenheim: Anderson and Blachowicz have been steadily climbing the ladder toward a title shot, and Saturday’s fight should be the final step for the winner. Of course, that ascent would have been detoured if Reyes had dethroned Jones, because how could you deny the greatest light heavyweight ever a chance at redemption? The same standard ought not apply to Reyes, though. He fought a noble fight and almost walked out of the cage with the belt. All respect to him for that. But title challengers don’t get two shots, at least not two in a row. If he’s championship material, Reyes will defeat anyone and everyone standing between him and another go at glory.

What would you do with Reyes if he doesn’t get the immediate rematch?

Okamoto: The loser of the Anderson-Blachowicz fight. Rankings-wise, that’s pretty much the only thing that would make sense. I mean, the only other option really for Reyes would be to wait it out. That was a tough 25-minute fight on Saturday, and don’t forget the grueling fight camp he put himself through before it. If he wanted to give himself a break and see how the division shakes out, it might not be the worst thing. But how long would he have to wait? Who knows when Jones will fight next, and who knows when he’ll finally test those heavyweight waters? It would be a tough pill for Reyes to swallow — to feel like he beat Jones and then have to beat another tough guy to get a title shot. But if he doesn’t get an immediate rematch, I think he’ll have to.

Raimondi: If Reyes isn’t next up for Jones, he’d only be one win away from getting back to a title shot, right? That would have to be the case. The UFC never capitalized on Alexander Gustafsson‘s momentum when he gave Jones the hardest fight of Jones’ life up until that point in 2013. Gustafsson didn’t get a rematch for more than five years. That’s an eternity in MMA, a sport that has existed in earnest for less than three decades. Let’s say Anderson or Blachowicz gets Jones next, Reyes should fight someone like Thiago Santos, who can also make a case for deserving Jones again after a narrow loss at UFC 239 last July. Otherwise, the best options for Reyes would be facing the winner of Anthony Smith vs. Glover Teixeira (UFC Fight Night on April 25) or Johnny Walker vs. Nikita Krylov (UFC Fight Night on March 14). Reyes vs. Walker would be particularly interesting, as both would present younger, marketable foes for Jones.

Wagenheim: Maybe Reyes will get his second title shot after all. Over the weekend, I read a really smart ESPN column arguing that it’s time for Jones to move to heavyweight. If the champ does so, Reyes could — and should — take on the Anderson-Blachowicz winner for a vacant light heavyweight title. If Jones instead opts to stick around at 205 pounds, Reyes can work his way right back into the title picture with one win over a top-10 contender. Ideally, he would fight another near-miss challenger like Santos, who last July took Jones to a split decision. They can console each other, then clobber each other.

If Jon Jones moves to heavyweight for his next fight, what do you do with the light heavyweight title picture?

Okamoto: I really don’t think this will happen. What is waiting for Jones — right now — at heavyweight? It’s not a heavyweight title shot. Stipe Miocic is the champion, and Daniel Cormier is going to get the first crack at him. Now, if Miocic ends up staying sidelined with his eye injury for an extended amount of time, maybe the UFC would do Jones vs. Cormier III for an interim heavyweight championship, but we’re not there yet. But if it were to happen, the answer is pretty obvious: Reyes vs. the Anderson/Blachowicz winner for an interim title.

Raimondi: I came into UFC 247 thinking that Jones should move up to heavyweight if he beats Reyes. I no longer feel that way. After two straight very close title defenses at light heavyweight, Jones should probably stick around at 205 pounds. Reyes and Santos are compelling matchups. Walker is coming up. There are things to like about the future of the division. Perhaps even more than those options, an Israel Adesanya matchup against Jones would be lucrative. And ideally, you want to strike while the iron is hot, while Jones is still on his record-breaking streak, including 14 title fight wins.

It’s hard to picture a light heavyweight division without Jones. He has ruled over 205 for nearly a decade. At first glance, I don’t see too many pay-per-view headliners in the weight class after Jones. There are plenty of good, deserving fighters. But I just don’t see a Reyes vs. Anderson or Blachowicz vs. Smith fight headlining a PPV anytime soon. Being a draw is kind of a prerequisite for being light heavyweight champ. If Jones leaves, Adesanya might have to move up and fill his spot.

Wagenheim: Easy. Reyes vs. the winner of Saturday’s main event. Either that or Chuck Liddell vs. Tito Ortiz IV.

Okamoto: Jones. Whether he ends up moving on to Anderson/Blachowicz, or faces Reyes again, I believe he will win and hang on to the belt. And if he moves up to heavyweight, I don’t think the UFC will strip him immediately. It will be similar to former featherweight champ Max Holloway moving up to lightweight last year for one fight against Dustin Poirier, but keeping his belt. I personally hope we see Jones vs. Reyes II in 2020. Sometimes it’s nice to let a rematch breathe a little bit, but because so many people believe Reyes should have won, that’s a rematch the UFC should book right away. But even though I believe Reyes beat Jones at UFC 247, I still believe in Jones’s ability to go back to the lab, identify where things went wrong, and beat him in a second fight.

Raimondi: Jones, of course. It’s impossible to picture him losing a title in the cage, because it has literally never happened. Twice, he was stripped because of outside factors, a felony hit-and-run arrest and a drug-test failure. But Jones getting beaten? It’s so rare that it has only happened once — sort of. Jones’ only career loss came via disqualification for illegal elbow strikes. My guess is Jones will hang around at light heavyweight in 2020. He’ll fight once or twice more, perhaps a rematch with Reyes or Santos, a bout with someone like Anderson or Blachowicz or Walker and a superfight with Adesanya. Jones is lethal in rematches and he would have a significant size advantage over Adesanya. He’d be favored over Anderson, Walker and Blachowicz, too. Jones might not be as much of an athletic freak as he was when he was 25 and the competition is catching up. But his great run will not end this year.

Wagenheim: I’m going to assume that by New Year’s, Jones will be singing “Auld Lang Syne” with the big boys, removing him from this 205-pound discussion. And based on what I’ve seen from all of the remaining top-shelf UFC light heavies — Anderson, Blachowicz, Reyes, Santos and Smith — I’m most impressed by Reyes. He took that fight to Jones last Saturday, with relentless but measured aggression. Early on, his punching and kicking combinations put the champ on his heels. And even after Reyes’ pace caught up to him, he never became so tired that Jones was able to take him down and beat him up. That was the kind of performance that champions are made of.