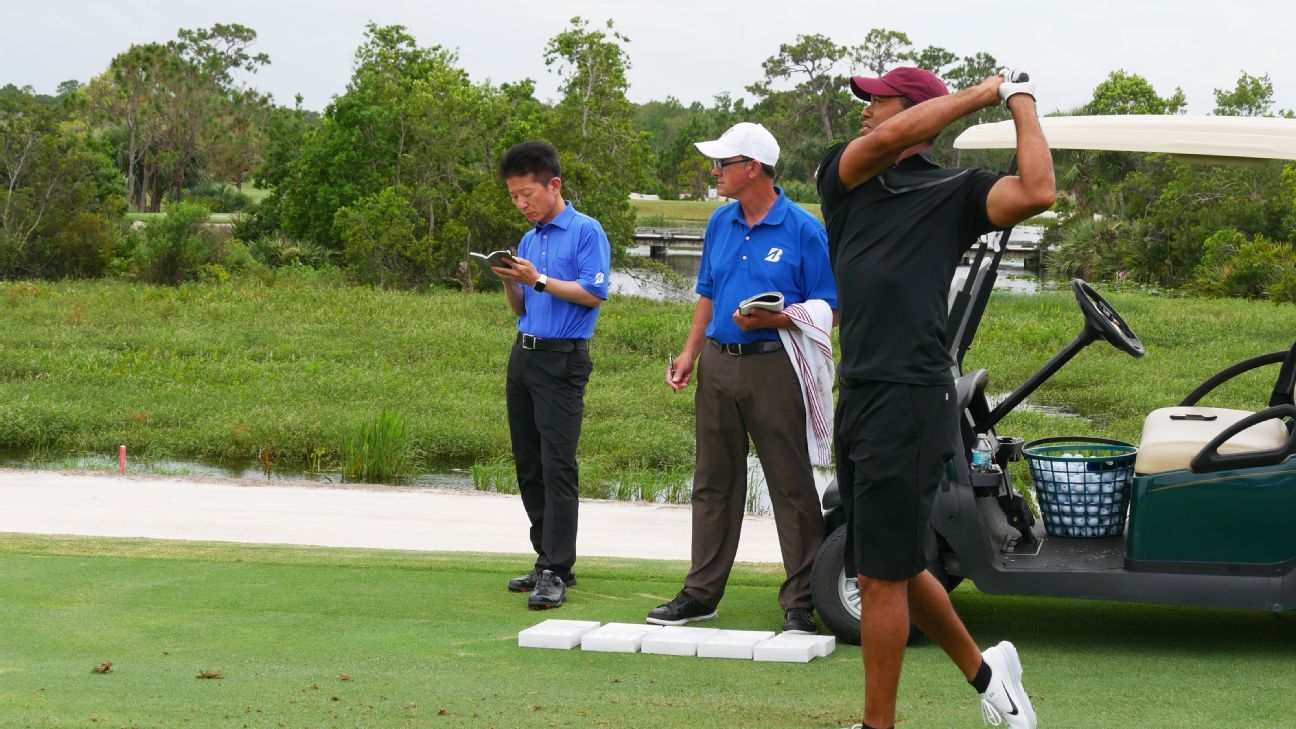 When Tiger Woods puts his name on a product, or his stamp of approval on golf equipment, it has to pass rigorous testing by the man himself. If Woods is planning to use a new club or a new ball, it has to meet his specific set of requirements under every possible scenario he might encounter in a tournament.

So when Bridgestone approached Woods in March 2018 about putting a new ball in play, the research and development team knew it was about to embark on a detailed process to examine, tweak and perfect the ball in a way only Woods could pull off.

“When he sits down with us in the very beginning, he doesn’t want to know anything about the golf balls. He may start while we’re hooking up the TrackMan or GC2 Quad launch monitor, he’ll reach in with his wedge and start tapping them up and down on the club,” said Adam Rehberg, Bridgestone golf ball fitting, events and partnerships supervisor. “He’s not just doing that for fun, he’s listening to the sound the ball makes, juggling it to hear that sound and that feedback. He doesn’t want to know what’s in the ball, he wants to pick it out.”

Testing with Woods starts around the greens, chipping, where Woods is looking for feel, sound and how the ball actually reacts on the green. Depending on the results, Woods will remove some balls from the tests if they don’t match the results he’s looking for, and will add more in to find the right ball.

From there, they move to the green to putt and try to get the same feedback. Woods is looking at how long the ball sticks to the face and whether he notices any differences in the speed of the ball. From there, the team makes its way to the course, where Woods will hit driver, 4-iron, 7-iron and full wedge shots.

Andrew Troutner is the head of Bridgestone’s test site and has experienced testing with Woods on numerous occasions. Troutner has seen firsthand the impeccable attention to detail Woods has, but also the accuracy and depth of knowledge Woods can provide. That happened as the company was testing its new line of Tour B balls that Woods would later put in use.

“With all those shots, he’s looking for how not only the ball reacts on his good shots, but he knows when he misses that ball slightly to the right or slightly to the left,” Troutner said. “How much does the spin increase or decrease based on those misses, he doesn’t want that number to be higher than a certain percentage. With the 7-iron, that window is probably most important, if it goes outside of his window, he’s going to kick that ball out.”

Woods will purposely hit a shot off to the right, a blocked shot, then turn one over to the left to see how the ball reacts in both scenarios. As the Bridgestone team looks on with the numbers immediately displayed off the launch monitors, Woods will call out the results on his shots with the launch angle and spin, coming impressively close to the actual results.

He understands his game so well, and what results the ball should be producing, that he became instrumental in providing feedback on how to tweak the prototype to get it to the perfect result.

The level of detail Woods is able to provide to Bridgestone is invaluable and incomparable. A robot can provide feedback in the form of numbers, but Woods can vocalize what he’s seeing and feeling in each shot with precise accuracy.

“A lot of the players we work with, they talk about launch and spin and velocity with the driver the same way you and I do and they get into it a bit with the irons,” Bridgestone’s golf ball marketing manager Elliot Mellow said. “Tiger is talking about launch angle on a 5-yard and 10-yard shot. Launch and spin rates and angle of descent on a 10-yard shot, things that other guys aren’t getting really as granular.”

The team takes the comments and feedback Woods gave them during the test, looks at the Trackman numbers and analyzes all the data. The information is passed on to Woods and the research and design team to come up with the next round of prototype balls to move closer to a finished product.

In the first test, Woods had gravitated toward the ball that had the Reactiv cover on it without being told that ball contained the new impact modifier. The second round of prototyping started in February 2019, and Woods pushed Bridgestone to go all-in on the new cover.

The first prototype had only a small amount of the impact modifier, and Woods suggested the company push with more.

Woods again went through the whole gamut of testing, sparing no shot. With the whole Bridgestone team looking on, Woods hit 3-foot putts to see what the ball does and how it sounds on a 3-foot putt. He then moved on to a longer putt, and eventually even farther out, before chipping near the fringe. Then moved to chip shots farther off the green before moving into full shots.

He’s watching the ball every time he hits it, looking at a window even in the 10-yard chip shot to make sure the ball comes out the way it should, and the way he wants it to. When he hits the ball and he looks up, if it’s not in the right window in his eye, that ball is out.

“Most of the time, the feedback he’s giving us, he’s reaffirming back to us what we already know,” Mellow said. “But there are other times where there’s something happening with stuff we don’t anticipate. As we moved from prototype 2 into prototype 3, we had a golf ball that had the right velocity, the right window, all the right feels, but it didn’t have the right stability in flight, which wasn’t something we went into that test prepared for.”

The ball fluttered in certain shots and didn’t have the right arc, so it was fluttering due to the spin rate and drag. Woods noticed what the ball was doing at its apex and that it was taking a steeper than normal dive as it descended.

That information led to Bridgestone slightly modifying the aerodynamic factors by modifying the dimples on the ball to get it back into the range Woods wanted.

All in all, there were seven rounds of prototype testing, and within those rounds, there were anywhere from five to eight prototypes tested per round that culminated with a final product in November.

The feedback Woods was able to provide helped create his model of the Tour B XS, but the comments he made along the way really helped design all four models of balls in the Tour B line. Although one prototype might not fit his specifications, getting comments on spin, launch angle, compression and performance helped the Bridgestone team design the rest of the balls geared toward players who might want those specific qualifications.

All of that personalized testing, combined with the research and development team at Bridgestone, has led to the new ball that Woods has put in play for 2020 and that Bridgestone is set to release to consumers.

The ball that best fit Tiger Woods based on his rigorous set of criteria and testing.

“When he’s done testing, at the end of the day, he looks at us and says, ‘How’d I do guys? Were my feels good,'” Rehberg said. “The data backs up everything he says perfectly. He’s the best tester.”