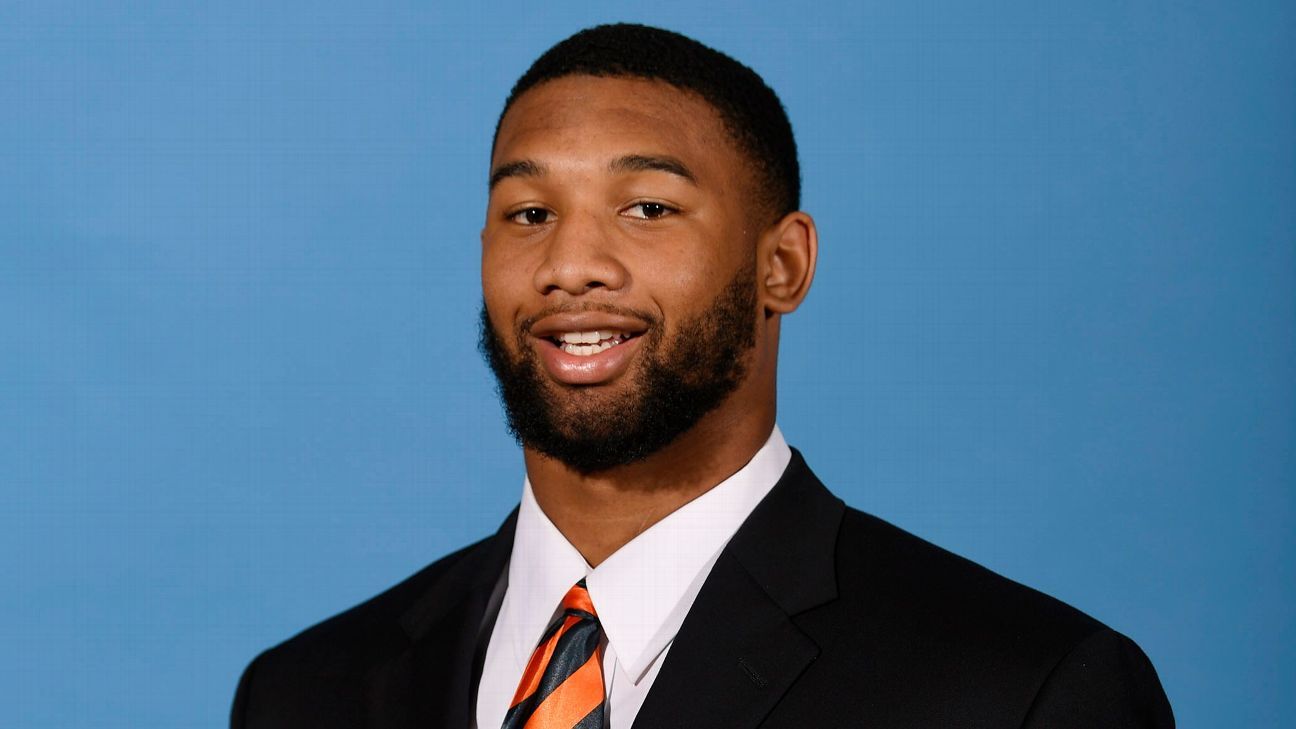 Eastern Kentucky linebacker Michael Harris, a former four-star recruit who transferred from Auburn, was arrested on four different charges Monday morning in Grove City, Ohio after he hoisted a police officer over his head causing them both to fall to the ground.

Harris has been suspended from all team and football-related activities, according to a statement Thursday afternoon from EKU. As a redshirt freshman at Auburn last year, Harris played in 11 games with three tackles.

Video obtained by ESPN shows the 6-foot-3, 245-pound Harris in a parking lot, grabbing a male officer around the waist, and lifting him up above his shoulders, before falling on top of the officer. Lt. Eric Scott with the Grove City Police Department told ESPN nobody was hurt.

As of Thursday afternoon, Harris was still in custody at the Franklin County Jail.

“One of the officers who was there is a very strong man, and he said, ‘I cannot believe the strength this man had,” Scott said.

“Eastern Kentucky University Athletics is actively monitoring an incident involving one of our student-athletes, Mr. Michael Harris, that resulted in criminal charges against Mr. Harris. Mr. Harris is currently enrolled at EKU and listed as a redshirt sophomore on the EKU football roster. He has been suspended from all team and football-related activities at this time.

“Understanding that details of the incident are still under investigation, and, abiding by FERPA laws and regulations, we must respect the privacy of our students. When the facts are established, and the investigation complete, Eastern Kentucky University and EKU Athletics will decide how to move forward responsibly.”

According to the police report, an employee at a local business called police because Harris was in their building and wouldn’t leave. The caller told dispatchers that Harris “was being aggressive, and that he did not seem to be ‘all there.'” Officer Carrie Rose, who is also trained as a crisis negotiator but wasn’t acting in that capacity, was the first on the scene and dealt with Harris alone for several minutes. Harris was near his vehicle, and according to the report, he was “agitated, was not able to stand still, and was not able to stick to one story.”

“She was able to try and calm him,” Scott said.

At one point, Harris went to the drivers’ compartment of his vehicle, and officer Rose instructed him to stay outside because she was still trying to determine his identity, but he told her she didn’t need his name, and continued inside the vehicle.

“He’s going through what we would call his progression of force, and they exercised extreme patience, but recognize when he goes for the car, that’s a deal-breaker,” Scott said. “We can’t have that. The concern is that this person is either in a mental health crisis or under the influence of a drug. Because of his behavior, it was clear that that would be unsafe.”

According to the report, Harris was “talking excessively and continuously leaning toward (officer) Rose, throwing his arms around, and at one point dancing,” leading officers to believe he was under the influence of a drug.

When the second officer arrived, Harris “continued to act erratic,” and was within arm’s length of the male officer.

Because Harris became “increasingly aggressive,” the second officer decided to put him in handcuffs to control the situation, but when he asked Harris to put his hands behind his back, Harris “smacked” the officer’s hand away, causing the officer to place him under arrest.

“Harris pulled away and walked back towards his vehicle, stating that he was not going to jail,” the report said. At that point, the male officer used (pepper) spray, but it was ineffective because Harris pulled the hood of his sweatshirt over his face. That’s when the officers tried to keep Harris from getting in his car again, and Harris lifted the male officer up over his shoulders.

“Fortunately the officer wasn’t seriously hurt,” Scott said. “He uses his foot to try and break his fall a little bit. The officer immediately remains composed. He has a hold of Mr. Harris and says, ‘I have him, I have him, just get an arm and secure him in handcuffs.’ They worked cooperatively together to handcuff him.”

A third officer can be seen on the video helping to secure Harris in the handcuffs.

Scott told ESPN that no additional force was used other than a restraint device because Harris was banging his head on the police cruiser. Because it wasn’t effective enough, medics on the scene gave Harris some medicine to calm him down, and he was taken by ambulance to a hospital.

According to the report, police found a digital scale and various drugs in the car. EKU had no further comment at this time.