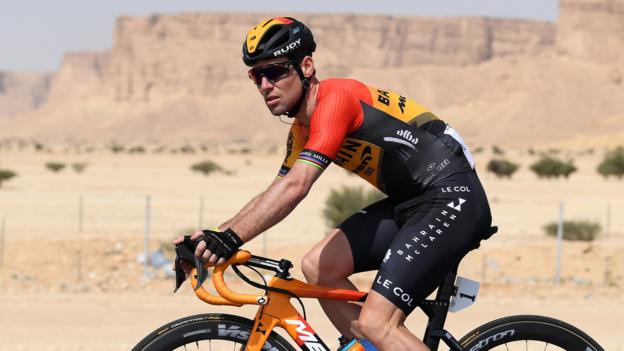 Mark Cavendish is not certain of a place in the 2020 Tour de France with his new team Bahrain McLaren, says their general manager Rod Ellingworth.

Cavendish, 34, was not picked for the 2019 race by previous team Dimension Data, but wants to add to his 30 stage wins to catch Eddy Merckx’s record 34.

“Nobody is guaranteed for the Tour – he knows it’ll be a hard challenge,” said Ellingworth.

But he added: “If he’s winning at World Tour level, why wouldn’t we take him?”

Ellingworth continued: “It’s a certain type of Tour this year, and I’m not shying away from saying that it’s an excellent Tour de France for [new signing] Mikel Landa.

“For Mark, if he’s winning and performing well, why would we not think about going on that journey and trying to be the greatest stage winner in Tour de France history?”

Cavendish, who has not been included in the Great Britain squad for the Track Cycling World Championships, was diagnosed with the Epstein-Barr virus in 2017 and has struggled for fitness since then.

But Ellingworth says he is happy with the Manxman’s fitness and Cavendish, who took part in the third-tier Saudi Tour last week, will compete in his first World Tour race of the year in the UAE Tour, which begins on 23 February.

“In terms of his health, we’ve now ticked that box,” Ellingworth added. “He had really struggled on and off. That’s what that virus does, it limits you, you can’t go deep, you can’t back up day after day.

“But he’s been training well for four months so that’s good. Then you have the race condition, which has not been there for a while, but we’ve ticked that box now.”