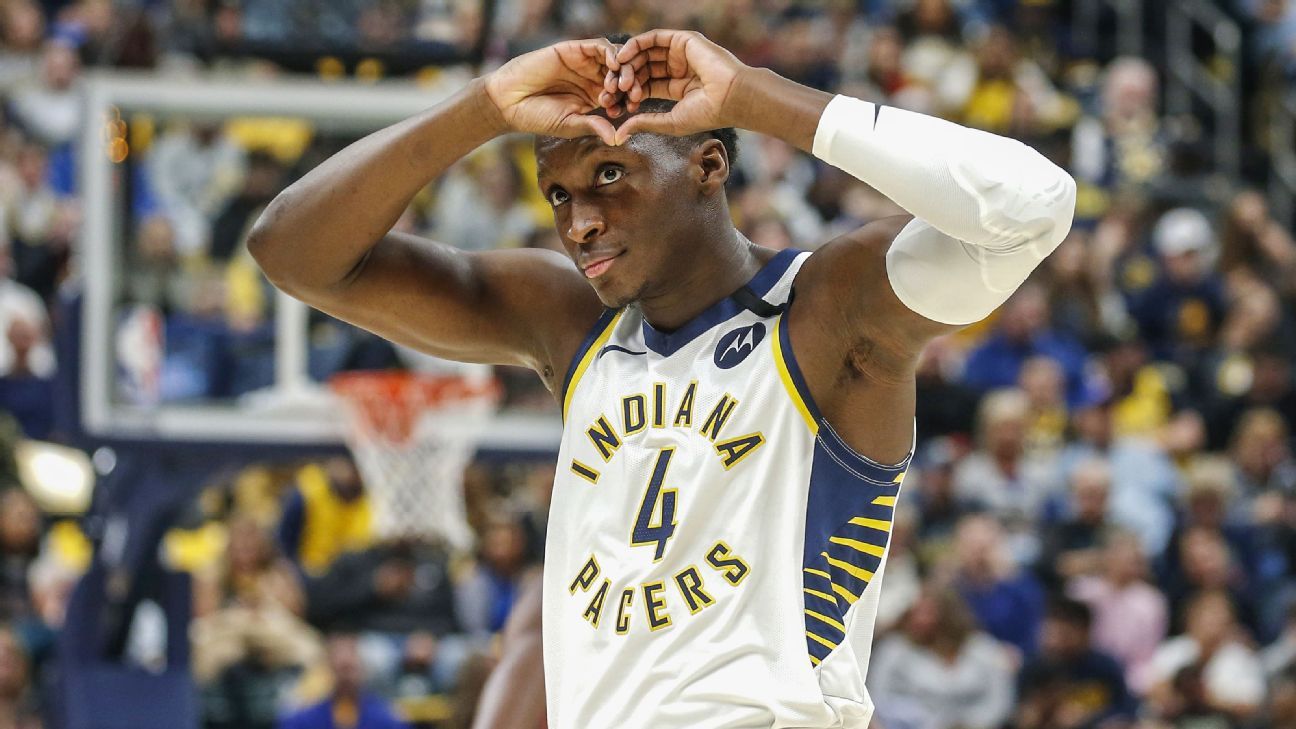 So when he was standing on the court before tipoff between the Indiana Pacers and New York Knicks on Feb. 1 and kept messing up his intricate dueling circus dribbling routine — between the legs, loop one over the other, switch hands, quick staccato bounces, switch hands again — he just put one ball down and laughed.

Eventually, the guard moved on to his pregame shooting drill. Nothing was falling. He missed six or seven 3s in a row.

It had to be his tucked-in T-shirt, he thought, pulling it out from his waistband.

He missed his next two. Another chuckle.

It was Oladipo’s second game of the season, and this rust-filled warm-up would be a precursor to his struggles finding a rhythm. He tried to play his trademark style — downhill, aggressive, assertive — but scored seven points in 22 minutes on 2-for-14 shooting in a loss.

Ten minutes after the final buzzer, Oladipo sat at his locker putting back on his T-shirt — untucked from the start this time — and pulling up a compression sleeve. He was waiting to knock out his postgame obligations and get back to the court for a workout.

It had been a full calendar year since he sat underneath the basket at Bankers Life Fieldhouse, saw a hole in his right leg and wondered when he was going to play basketball again.

Oladipo might be back in uniform, but that just means he is on to the next step in the Pacers’ three-phase approach to the season.

What happens next in Indiana is contingent on Oladipo enacting phase three of that plan: He can’t just be back. He has to be back. And he’s not there yet.

“I missed a whole year of NBA basketball, not just basketball. It’s the highest level of basketball. It’s different,” Oladipo said. “I’m not frustrated at all. Because I’ve been on the court and made all those shots that I’m shooting. I know I can make ’em.

“It’s just a matter of syncing my body and my mind.”

OLADIPO THOUGHT HIS knee had fallen off.

Before the stretcher came out, before the doctors and trainers rushed to his side, before he had even glanced down to see what happened, he just wanted to know if his knee was still there.

It was Jan. 23, 2019, against the Toronto Raptors, and with about four minutes remaining in the first half, Oladipo was getting back on defense trying to break up an outlet pass to Pascal Siakam.

Oladipo was tracking the ball over his shoulder. He planted with his left leg, then his right, which buckled underneath him. His face turned and he reached out his arms to break his fall, instead inadvertently taking out the legs of Siakam. For about two tense seconds, the Raptors were incensed about an uncharacteristically dirty play by Oladipo. Everyone quickly realized it was something else.

Head athletic trainer Josh Corbeil arrived first and put both hands on the knee. It took only a second more for Corbeil to raise a fist in the air: Bring the stretcher.

Seeing either Corbeil’s fist or the knee itself, Myles Turner turned away and put both hands over his face. Scott McCullough, the Raptors’ head athletic trainer, ran off their bench to lay a towel over Oladipo’s shoulders. Corbeil grabbed it and immediately covered Oladipo’s knee with it.

Oladipo looked into the baseline stands, trying to make eye contact with his mom, Joan, and his friends. Grimacing, he saw them and shook his head. But he remained calm. He didn’t slap the floor. He didn’t scream in agony.

After the swelling went down the following morning, an MRI confirmed: He had ruptured the tendon that connected his quad muscle to his kneecap, one of the rarest severe injuries in sports. He was only the third NBA player to ever rupture a quad tendon (Tony Parker in 2017, Charles Barkley in 1999).

“I’m not dumb. Obviously, I know I was out a year and had a major injury and it may take some time. But I have no doubt I’ll be back better than I was because of the work I did.”

Surgery to repair the tendon was a success, and Oladipo started light rehab the next day. Three days later, he was in the gym, shooting from a chair.

After three or four months, Oladipo was back on the court for another step forward: light drills, no contact, but back on the court. Then one day in May, he put the ball on the floor, took a couple of hard steps, planted and rose for a dunk.

In August or September, he was at the Pacers’ practice facility, going through a workout against a scattered collection of players, when he hit a new milestone in his rehab. It was another dunk, this time with a little more flair.

THE PACERS ENVISIONED a .500 record when Oladipo returned, but they aced the first third of their test.

The seven offseason additions started fitting. Domantas Sabonis developed into an All-Star. They rediscovered their identity as a defense-first, fundamental, role-based team en route to a 30-17 record.

On Jan. 29, Oladipo returned to a squad with multiple stars and collective depth.

He started off the game against the Chicago Bulls by logging 21 awkward minutes, hitting only one of his seven shots. Then, down by three with 10 seconds left, he caught the ball on the left wing, some 30 feet from the bucket. He had a little space, so he pulled — a clean swish.

The Pacers ended up blitzing the Bulls in the extra frame, and in Oladipo’s postgame interview on the court, the emotions overwhelmed him.

It was only a few days after Kobe Bryant, his daughter Gianna and seven others died in a helicopter accident outside Los Angeles. And everything came rushing at Oladipo.

Oladipo seesawed back and forth from his left foot to his right, shaking his head, tears filling his eyes. He talked about what a tough year it has been, and he used a favorite line of his: “Tough times don’t last; tough people do.”

He pulled his shirt up to wipe his eyes, his voice shaking. All he could say at that point was that he was thankful.

INDIANA’S TWO-WEEK STRETCH since Oladipo’s storybook debut has been a harsh overcorrection.

“We’re adjusting to one guy,” Pacers guard Malcolm Brogdon said after a home loss to the Dallas Mavericks. “He’s a big piece, but it’s one guy.”

Oladipo’s minutes restriction is playing a part; patchy intervals have added up to 24 per game, though the Pacers have been edging over that number lately.

All the key components appear to be there for Oladipo. He said his handle is tighter than it’s ever been. He worked relentlessly on his jumper and extended his range some. He feels like his explosiveness and first step is close to what it was prior to the injury. In many ways, he considers himself a more complete player, thinking the game differently, using angles rather than just brute force.

But the ball just isn’t going in the basket.

At practice a day after the home loss to the Knicks, Oladipo worked then reworked a series of 35-footers with assistant coach Bill Bayno. The guard couldn’t get his last one to drop from the left wing.

After each miss, he would rehearse his follow-through, he would shake out his arms, he’d twirl the ball, he’d stretch out his back, he’d slap his hip. When he finally broke through, it was on to the next spot to make another batch.

“I’m not dumb. Obviously, I know I was out a year and had a major injury and it may take some time,” Oladipo said. “But I have no doubt I’ll be back better than I was because of the work I did.”

Against the Mavericks the next night, Oladipo struggled again, scoring nine points on 4-of-17 shooting, including 1-of-10 from 3. There was a moment late in the third quarter when Oladipo relocated to the corner and was open for a brief second, but Brogdon either didn’t see him or just didn’t give up the ball.

Oladipo threw his arms above his head and clapped his hands. It was a small flash of minor annoyance that serves as a reminder of what Indiana is working through.

The losing streak juxtaposed with Oladipo’s return makes for an uncomfortable connection. There’s no striking statistical symptom that explains it. Overall, the Pacers have been a little worse offensively, and a little worse defensively. But in Oladipo’s minutes, they’re scoring 96.3 points per 100 possessions and being outscored by 14.4. Without him, they’re a plus-2.8 with an offensive rating of 113.8.

“This is his October,” Pacers coach Nate McMillan said. “He’s trying to play himself into a rhythm, and he’s not going to get into a rhythm unless he shoots it and gets confidence out there. The only way to get that is to play.”

This is phase two of the three-phase season. The Pacers hope the All-Star break will bring refreshment and help Oladipo get better acclimated. They’re still exceeding their own expectations, and they’ve always had an eye on what this roster can become when its All-NBA guard returns to full speed.

“I believe when I’m at that level, we’ve got a chance to be very special,” Oladipo said. “And not because of me solely … we have the right pieces to do something special.”