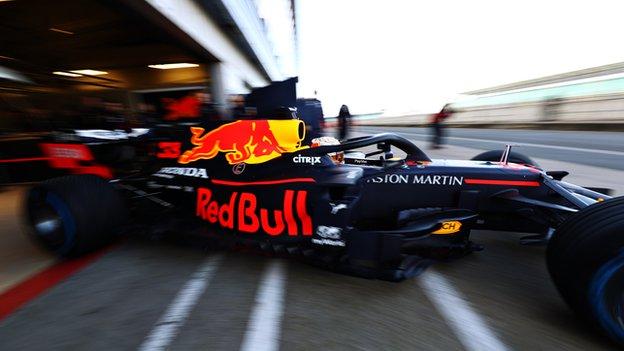 Max Verstappen described his first experience of Red Bull’s 2020 Formula 1 car as “very positive” after it ran at Silverstone on Wednesday.

Red Bull conducted a private test limited to no more than 100km to shake down the new RB15 before the start of pre-season testing in Spain next week.

“It is important to get the car running and to check all the bits on the car that it’s all working before we get to Barcelona,” Verstappen said.

Verstappen’s team-mate Alexander Albon, who did not drive, also attended the test.

The new Red Bull is an evolution of last year’s car with a number of interesting developments.

Most obvious are changes around the front of the car, to its nose tip and cone.

There is a new twist on the team’s ducted nose cone, which first appeared a couple of years ago and is aimed at freeing up space for airflow along the car for aerodynamic advantage.

A new narrower nose section, with a pronounced lateral step where it meets the monocoque at the front suspension mounting point, has the same aim and is reminiscent of a similar design first introduced by world champions Mercedes and subsequently adopted by McLaren.

A curved section of bodywork under the nose, known as a cape, also follows a trend started by Mercedes.

Further back, the rear bodywork is noticeably narrower than last year’s, with the aim of improving the airflow on top of the rear floor, which sucks more air out from under the car and increases rear downforce.

Red Bull are going into their second season with engine partner Honda, having secured the services of Verstappen until at least 2023 after the Dutchman signed a new contract in December.

Verstappen won three races on his way to finishing third in the championship last year, behind Mercedes drivers Lewis Hamilton and Valtteri Bottas. He said at a media event last week that he was hopeful of taking the championship fight to Hamilton this season.