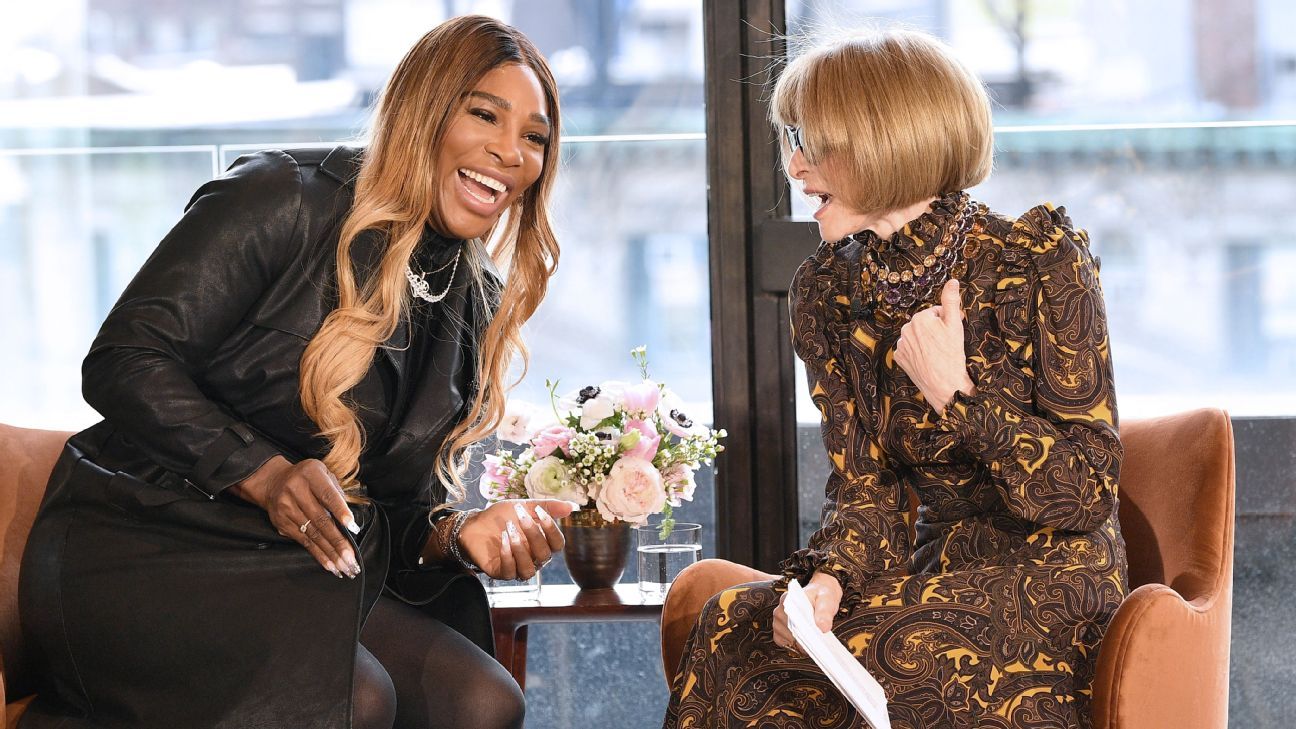 The denim skirt Serena Williams wore during an exhibition match on Arthur Ashe Kids’ Day at the 2004 US Open wasn’t her favorite on-court look. Still, the 23-time Grand Slam champion thinks it was worth an honorable mention.

Moments before showcasing her S by Serena Spring 2020 presentation at Spring Studios in lower Manhattan on Tuesday morning, Williams spoke with Vogue Editor-in-Chief Anna Wintour — in front of a room full of fashion editors and influencers — on the inspiration for her latest collection, motherhood and her most iconic on-court looks.

“I have been doing fashion since 2000. … I went to fashion school, I like to say, between winning Wimbledons and US Opens,” Williams said.

Wintour, notoriously stoic, smiled as Williams declared the Nike x Virgil Abloh-designed custom tutu she wore during the US Open — soon after the catsuit ban at the French Open in 2018 — as her favorite on-court look. “Oh, yes, you went with the Virgil,” Wintour added. Williams continued, “Sometimes the [looks] are a miss. But I think it’s good to have fun with fashion.”

Williams was a co-chair of the 2019 Met Ball alongside Harry Styles, Lady Gaga, Gucci creative director Alessandro Michele and the famed editor. The Met Gala, one of the most prestigious fashion events of the year, is an annual fundraiser for the benefit of the Metropolitan Museum of Art’s Costume Institute in New York City.

Wintour posed a question about Williams’ multilayered identity. Pro athlete, mother, wife, designer or entrepreneur — which title wears the crown? To which Williams said it was impossible to declare. “Being a leader so my daughter can say, ‘This is what is my mom did,’ and being an inspiration for her, that means a lot to me.”

Hero is another title Williams is learning to embrace. During the Academy Awards on Sunday, Renee Zellweger won best actress in a leading role for her performance as Judy Garland in the film “Judy.” The actress spoke about heroes and what it meant for her to play Garland, and among the names she called out in her acceptance speech were those of Serena and Venus Williams.

Williams said she was honored by the sentiment, adding that her personal “heroes are moms. Women are superheroes. To have a baby and have to go to work two weeks later, or three weeks later, or even to go work from 9 to 5 … I think women need to be recognized.”

In the crowd, famed Vogue contributor Andre Leon Tally, draped in a particularly eye-catching velvet caftan, nodded in approval as the models took their walk. Caroline Wozniacki modeled the final look. Williams narrated, offering up the materials used in the collection, such as vegan leather and sequin. Another win on the books. No twirl at the close of the show, but as she exited, the crowd overheard Williams, who had forgotten she was still connected to a microphone, say to her models, “You did so good. You looked great.”