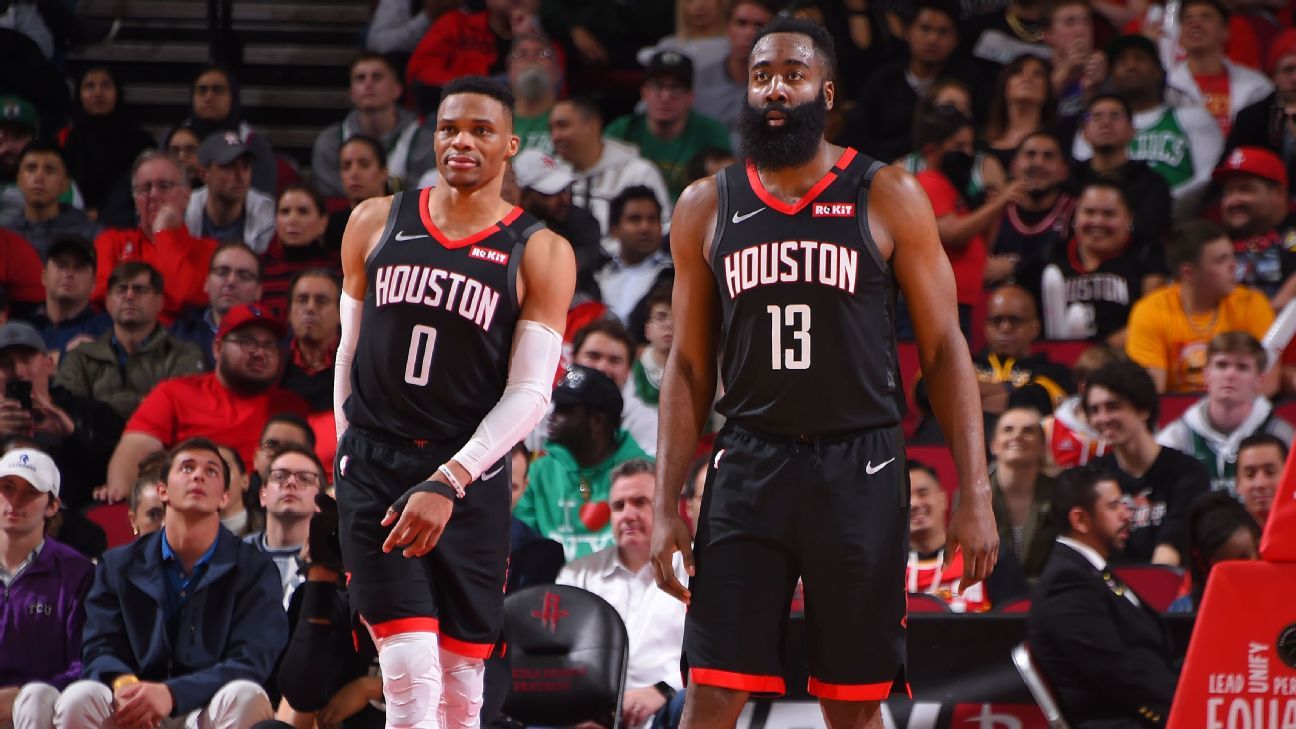 HOUSTON — The Houston Rockets provided a glimpse of their potential when both of their superstar guards have it rolling.

“It’s pretty scary,” James Harden said after a 116-105 win over the Boston Celtics on Tuesday at the Toyota Center.

Harden scored 42 points in the win, the most by the NBA’s scoring leader in more than a month, shooting 9-of-19 from the floor, 7-of-16 from 3-point range and 17-of-18 from the free throw line. Russell Westbrook continued his recent hot streak, scoring 36 points on 13-of-23 shooting from the floor and 10-of-13 from the line.

It was the first time in franchise history that a pair of Rockets each scored at least 35 points in a regulation game, according to the Elias Sports Bureau. Paul George and Kawhi Leonard of the LA Clippers are the only other teammates to each score 35 points in a game this season.

The daggers by the All-Star duo late in the fourth quarter demonstrated how their different skill sets can complement each other.

Boston sent a double-team at Harden, who scored 19 consecutive points for Houston at one point in the third quarter, on the right wing, wanting to force the ball out of his hands. He obliged by giving the ball to Westbrook on the other wing, sending Celtics guard Kemba Walker scrambling across the court. Westbrook immediately attacked, blowing by Walker and spinning around Boston center Daniel Theis in the paint before laying the ball off the glass. Theis’ goaltending put the Rockets up by 15 with 2:41 remaining.

A couple of possessions later, the Celtics played Harden straight-up. He drilled a step-back 3 to push the lead to 18 points, prompting Houston coach Mike D’Antoni to clear the bench.

With the win, the Rockets are 5-2 since becoming a full-time small-ball team, a transition made when center Clint Capela was sidelined indefinitely due to plantar fasciitis and completely committed to when he was traded in a four-team, 12-player deal that brought forward Robert Covington to Houston.

Westbrook sat out one of those losses, a lackluster blowout in Phoenix the night after the Rockets’ road win over the Los Angeles Lakers. He has been spectacular in the rest of the stretch, averaging 34.0 points and 6.0 assists while shooting 51.5% from the floor, taking advantage of the open floor created by being surrounded by 3-point threats.

“It’s tough to guard, especially when I’m attacking and making plays and being able to do what I need to do to be effective,” said Westbrook, who had 10 rebounds and five assists against the Celtics.

The Rockets’ decision to regularly play without a center was made in large part to benefit Westbrook, playing to his strength as a relentless rim attacker by reducing the clutter in the paint. Since Capela’s last game with the Rockets, 86 of Westbrook’s 136 field goal attempts have come in the restricted area, where he has converted at a 66.7% clip.

“That’s his game,” D’Antoni said. “James has his step-back, so whether it’s clogged or not, he still has an arsenal he can go to. For Russell, [the spacing created by small lineups] is really advantageous, and it will be for James, too. It makes them really hard to guard.”

The Rockets are 4-1 when Harden and Westbrook each score at least 30 points, including wins over the Dallas Mavericks and Celtics in the past two weeks.

“We made a big change, and we’ve got to get adjusted to that with Clint gone,” Westbrook said. “So we’re just kind of getting acclimated to that. I think we’ve got it moving in the right direction.”