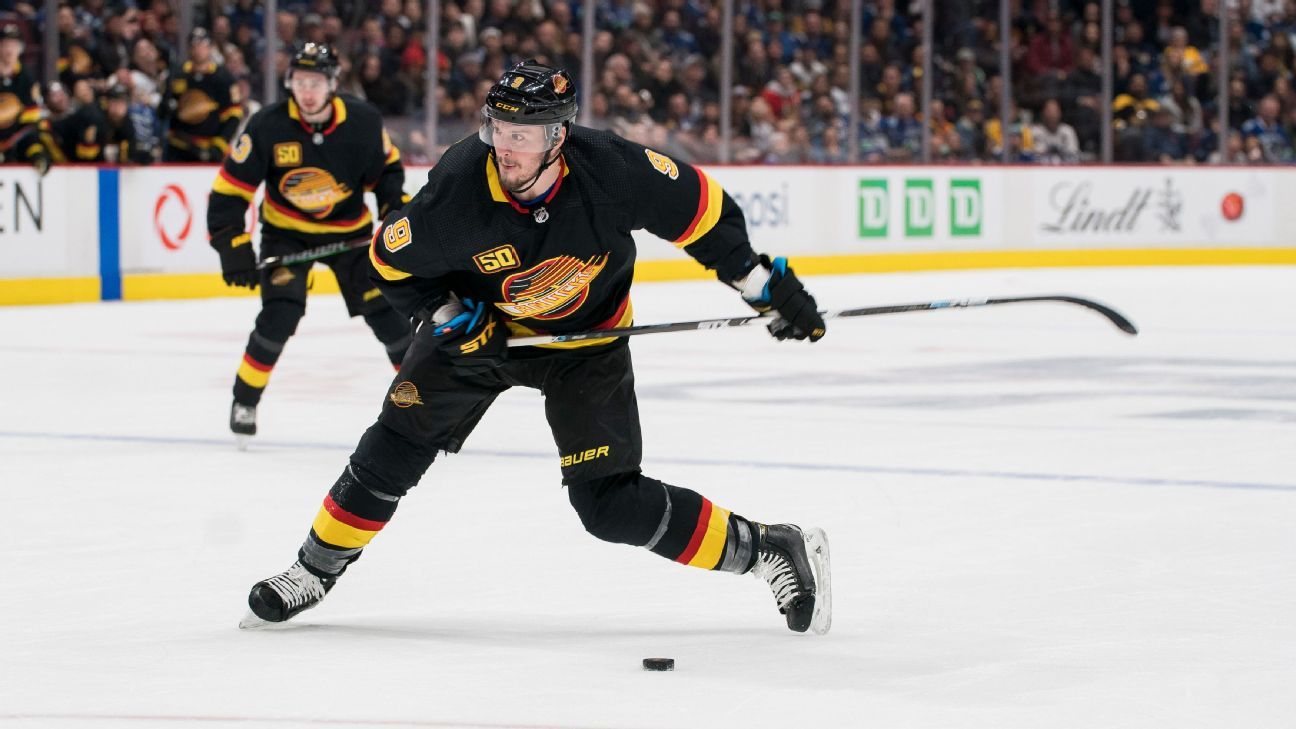 SAN JOSE — J.T. Miller has a reputation in the NHL. He’s a blue-collar player with a physical edge. He’s a versatile forward able to play in a variety of roles. But when the Tampa Bay Lightning traded him to the Vancouver Canucks last summer, he earned another label: someone worth spending a first-round draft pick to acquire.

Teams don’t just throw those picks around in trades anymore. When they are dealt, it’s rarely for forwards who have never hit 25 goals or 60 points in a season, as Miller hasn’t.

Fans questioned the investment. And Miller took notice of the price tag, too.

“I realized they gave up a lot for me, and I should feel good about that,” he told ESPN recently. “I was given a great opportunity here and I wanted to make the most of it. I probably had my best summer in the gym. I worked my ass off this summer. I wanted to put my best foot forward. And I definitely haven’t always done that before. It gets back to what they gave up for me: I had a point to prove. It motivated me. And it’s paying off.”

That it is. Miller was given an opportunity to be a top-line forward for the Canucks, and he’s done anything but squander the chance. The player who hasn’t scored 25 goals in a season has 22 of them. The player who hasn’t hit 60 points in a season has 56 of them in just 57 games. His average ice time (19:51) is over five minutes higher than what he averaged in Tampa last season (14:40).

“You always hope a player comes as advertised,” said Canucks coach Travis Green. “He has. He’s probably exceeded some of those expectations.”

Top-line success in Vancouver wasn’t predestined for Miller. He was a solid performer — from 2015-18, he averaged 22 goals and 52 points — when the Lightning acquired him in the trade that also netted them defenseman Ryan McDonagh from the New York Rangers. They gave him a prolonged audition on their top line with Steven Stamkos and Nikita Kucherov, but after eight points in 17 games for the Lightning in that postseason, the team decided to change his role.

“I got there, I fit in well. [Then] I was told going into the next season that, ‘We see you [in the bottom six]. We want to win a championship and we see you here, filling this role,'” he said.

Miller saw his ice time cut. Instead of Stamkos and Kucherov, he was skating with the likes of Anthony Cirelli and Ryan Callahan. His goal total dropped by 10, and he posted his lowest points total since 2016. But he learned from it.

“It was a learning experience for me. I wanted to play more. But I was buying into that,” he said. “That’s something I bring here. Everybody wants more minutes. Everybody wants a bigger role. But sometimes when you want to win, you have to do what’s asked of you.”

He learned a lot of lessons with the Lightning, including the harshest one last April when the Columbus Blue Jackets swept them out of the playoffs in embarrassing fashion.

The lesson? “Anything can happen, and you can’t take anyone lightly. We were a period away from going up 1-0 and felt like we were dominating. And then lost four straight,” he recalled.

The Blue Jackets embodied a mantra that Miller’s old coach in New York, Alain Vigneault, used to swear by: Just get into the playoffs, and anything can happen. It’s wisdom that Miller has imparted to his new teammates.

“Something I’ve been preaching to this team is that we need to play well enough to get into the playoffs. Don’t stress too much. Just try to get in. Anything happens when you get there,” he said.

In a short time, Miller has become one of the Canucks’ prominent dressing room voices. There’s a competitive fire to him, fueled by a career of impressive success. In every full season he’s played in the NHL, Miller’s teams have qualified for the Stanley Cup playoffs. It’s not good enough that Vancouver wants to win, it’s that it should expect to win.

Look no further than his infamous reaction to a 4-0 loss to the Boston Bruins on Feb. 4. “I don’t think they’re anything special. I mean, they’re a good hockey team. I’m not sitting here like, ‘Oh man, we’re playing this team tonight,'” he said after the game. “We’re a good hockey team. We should have swag about that. We’ve proven we can beat any team in the league.”

Green has been impressed by Miller’s growth.

“I think he’s relished a new role — a leadership role, while playing top-line minutes,” Green said. “That’s what every player wants, but they still have to perform. And he’s done that, so he deserves all the recognition he’s getting.”

Miller is only 26, but he’s a grizzled veteran compared to his primary linemate, 21-year-old phenom Elias Pettersson. His north-south style of play fits well with the artistry of the Calder Trophy winner, who has 57 points in 56 games this season. Miller calls him a “special player” whose dynamic offense reminds him of a young Kucherov.

But the key word is “young,” and Miller has done what he can to help Pettersson adapt to the ebbs and flows of the season.

“We talk all the time. Like, I tell him that sometimes it’s going to be tight and there’s nothing there. We can be exposed there, making those mistakes. But if we can keep it going forward and be patient … he’s such a skilled player, all he needs is one little hole in the defense and that’s all he needs,” said Miller of Pettersson. “Sometimes it’s open, and sometimes he needs to learn that it’s not always there. To be patient. Especially this time of year. The holes get smaller. Space gets taken away. That being said, he makes it look really easy.”

If the Canucks haven’t exactly made it look easy, they have made it look better than anticipated. As of Tuesday, Vancouver was atop the Pacific Division with 67 points, seeking its first playoff berth since 2015.

“It’s hard not to look at the standings,” said Miller. “You can’t take any nights off. And if you do … we won seven in a row, lost a game, and we were out of the playoffs. We understand the situation. And it’s good that it’s tight. We won’t be able to take our foot off the gas. And that’s good for a younger team like this.”

It’s all a learning experience. Whether it’s handling a new role, bouncing back from a loss … or knowing what it takes to prove you’re worth a first-round pick.

Miller knows the Canucks paid a price to bring him to Vancouver. He’s glad they did, and not only for the career year he’s having.

“Maybe on paper, I didn’t want to come this far away from home. But that’s the only [hesitation]. I know Vancouver’s a great organization, and a hell of a place to live,” he said. “The way the team is going right now, the fun we’re having … it’s so much more satisfying than any personal success.”