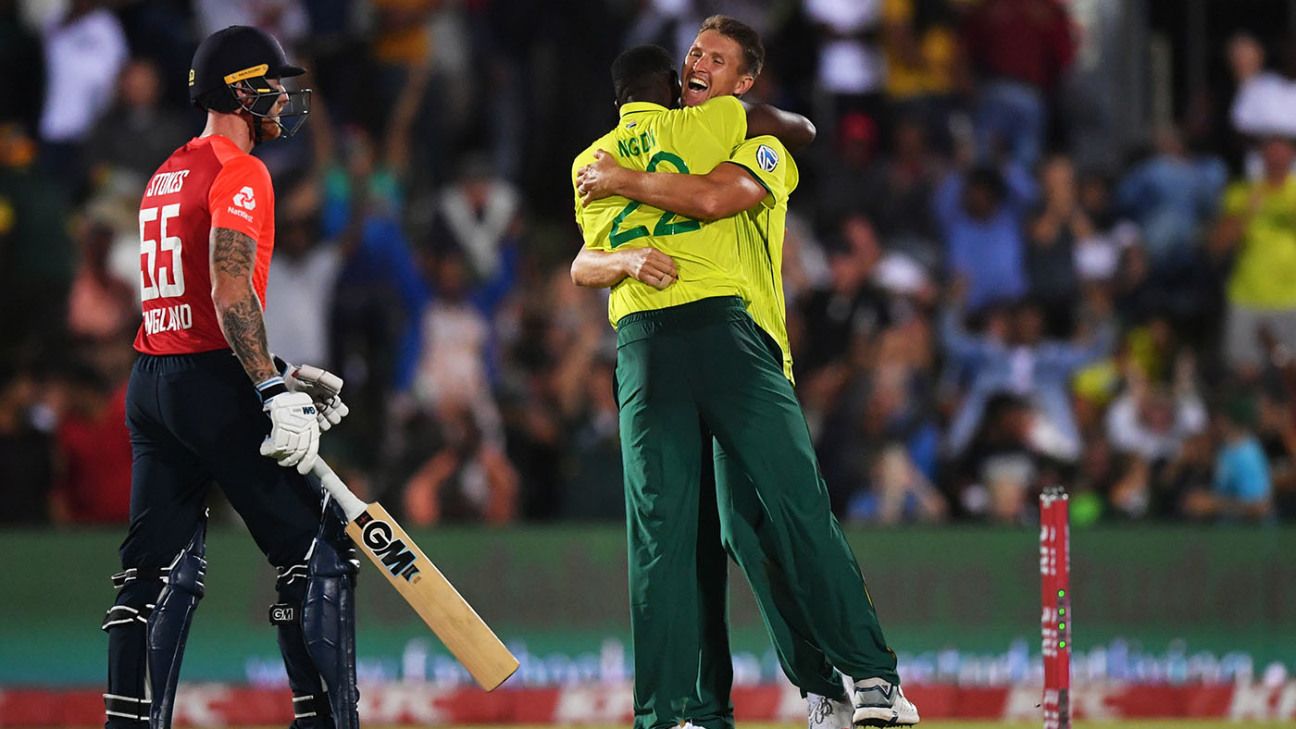 Lungi Ngidi knows a thing or two about making a comeback. In his short international career, which has just turned two years old, he has already had to recover from a stress fracture, a side strain and a slew of hamstring niggles, the latest of which kept him out of this summer’s Test series against England. He returned for the white-ball matches and he has now shown an ability to come back, on the field.

On Sunday, in the Pink ODI at the Wanderers, he dragged South Africa from a certain defeat to tense one with a final spell of 3 for 11 in four overs, after his first five overs had cost 52 runs. On Wednesday, in the first T20I at Buffalo Park, he turned England’s chase from flying to floundering with a death-bowling spell off 3 for 10 in two overs, after an opening spell of 0 for 20, and has proven his ability to play the big moments.

“I guess it’s a mental thing, to be able to finish off well in situations that require you to,” Ngidi said afterwards “It takes a lot out of your mental side. Physically, obviously I am trying as best as I can to get back to the pace that I was at and to hit the areas that I am known for hitting. But at the moment, it’s just trying to keep that confidence going of doing my job at the back end and closing out very well.”

Though Ngidi made his name for bowling fast, he demonstrated a different quality at the death in East London. On a slow pitch, Ngidi’s offcutter foxed Ben Stokes into fetching a wide ball and slapping it to long-on in the 18th over, with England 26 runs away from victory and 14 balls remaining. Top-scorer Jason Roy had been dismissed by a Beuran Hendricks slower ball three overs before that, while Dale Steyn, playing for the national side for the first time in 11 months, had also taken pace off the ball earlier to demonstrate the value of skill, rather than speed, in the shortest format.

The South African attack’s attention to developing the more nuanced areas of their game has been notable under the coaching of Charl Langeveldt, who was with the team under Russell Domingo and was headhunted from his role in Bangladesh to return in the Mark Boucher era. Ngidi credited Langeveldt with giving him the belief to bowl a variety of different deliveries and trust that the results can be effective.

“He has had a massive impact in terms of the mental side,” Ngidi said. “Having watched him and the way he used to bowl, he has given me a lot of confidence as a young player, knowing someone like that is now on my journey. He has made sure I back the skills that I am good at. Something like that on the back end, where maybe someone would say maybe a change of ball was needed or maybe a yorker, stick to what’s working and it worked out just well.”

ALSO READ: ‘Experiences like this are so valuable’ – Eoin Morgan

The yorker did make an appearance in Ngidi’s final over, when he bowled Moeen Ali with the penultimate ball of the match, with England still needing three runs for victory. That wicket, and the run-out off the last delivery meant that Ngidi successfully defended seven off the final over, which is not often heard of in T20 cricket. But in East London, Ngidi knew it was possible. “The game speeds up a lot at the back end here so even 10 runs can seem like a lot,” he said.

So can 178, a score that would be considered gettable in most T20 matches. While Ngidi will receive the bulk of the plaudits for restricting England to less than that, South Africa’s attack as a whole will be thrilled with the collapse they forced on an opposition that bats deep. England lost 7 for 44 in 5.4 overs as Tabraiz Shamsi, who went wicketless and Hendricks, who was only brought on to bowl in the 15th over, started the squeeze before Ngidi finished off.

With Andile Phehlukwayo and Steyn also among the wickets, Kagiso Rabada resting from this series and Sisanda Magala waiting in the wings, pending fitness, all that leaves South Africa with some healthy competition in the pace department, and Ngidi wants to make sure he stays ahead of the chasing pack. “We know that there are a lot of fast bowlers fighting for a spot so you’ve got to be on your A game,” he said. “If you’re not quite there, someone else is going to come in and do the job you’re supposed to be doing. I don’t plan on letting anyone take my spot so I am just going to keep playing as best as I can.”