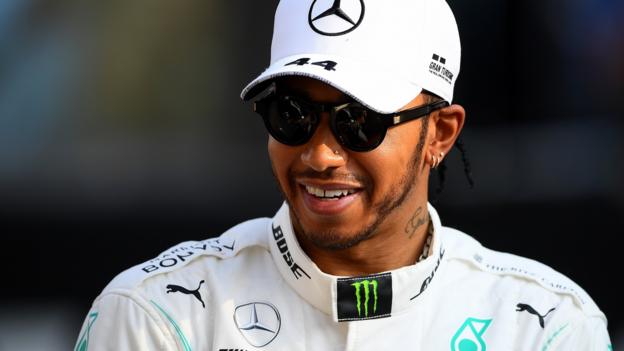 Lewis Hamilton says he feels “physically and mentally on another level this year” after a successful pre-season training programme.

The six-time world champion’s comments came in an online message to fans before the debut of his new Mercedes later this week.

Hamilton, 35, is aiming to win a seventh world title this season.

He said last week that he was five kilograms lighter than his 2019 starting weight.

He added his training had been “different” and that he had had “an incredible winter”, including valuable time with his family.

And if he keeps up his win average of 10 a season since 2014, he will surpass Schumacher’s record of 91 Grand Prix victories.

But in a video message posted on Twitter by Mercedes, Hamilton said he was not taking anything for granted.

“I know you guys are all gunning for number seven, but we have to just take it one step at a time,” he said.

“We have no idea where we are going to stand compared to everybody else so we just have to try and be more efficient in our test programme as we have less time and we still have lot of work to do.”

In his own personal Twitter post last week, Hamilton posted a picture of himself bare-chested and said: “Last year I arrived into testing with a lot of water weight and around 78kg. This year, I’m at a better weight of 73kg. Still have more fat to burn off and more muscle to add but on the way.”

The Mercedes runs for the first time at Silverstone on Friday in a private test and pre-season testing starts on 19 February.

The number of days of testing before the first race in Australia on 15 March has been cut from eight to six this year.

Hamilton said: “We just have to try and be more efficient in our test programme as we have less time and we still have a lot of work to do.”

North stars: NHL’s ASG heads to Toronto in 2024
After missing World Cup and struggling for form, Matthew Hoppe’s focusing on what he can control
Marlins 0-2 in arbitration; Luzardo gets $2.45M
Newgate wins race run only by 4 Baffert horses
Society at every LeBron James career points milestone