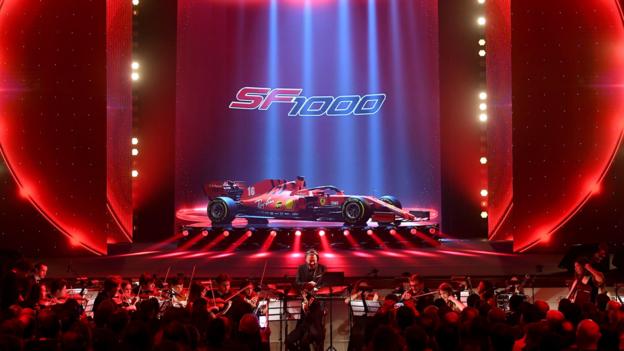 The sun shone on Ferrari for the launch of their new car. Literally. It was a glorious day in Emilia Romagna, the thermometer nudging 20C, brilliant blue skies, the snow glinting on the Apennine peaks.

As the fading light cast a golden hue on the terracotta buildings of Reggio Emilia, Ferrari drivers Charles Leclerc and Sebastian Vettel signed autographs in front of the Teatro Romolo Valli.

The building’s glorious facade was bathed in red light, reflecting the colour of the car about to be unveiled inside.

A more serendipitous setting for the debut of the machine that carries the hopes of Leclerc, Vettel and an entire nation could hardly be imagined. But it will take more than fate for Ferrari to live up to their ambitions and stop Lewis Hamilton’s march to a seventh world title in 2020.

The trend in recent years has been for low-key launches – Mercedes and Red Bull, for example, are not holding events at all this year, preferring to run their cars in private at Silverstone this week and release their own pictures and press releases.

But F1’s most famous team went grandiose for the car they have called the SF1000, to reflect the fact that the team will reach the landmark of their 1,000th World Championship grand prix this season.

They chose Reggio Emilia for its links with the origins of the Italian state, and as a representation of Ferrari’s position as a national F1 team.

The town was where the Italian tricolour was unveiled more than a century and a half ago. The lovely theatre that hosted the launch was built in 1857, and is one of the grandest examples of neo-classicist architecture.

A 20-piece orchestra and 19-strong choir introduced the event with dramatic Carmina Burana-style music. There were loose-limbed dancers in red and white, stretching the limits of physical possibility.

After all that, the car on first impression appeared something of a disappointment, bearing a strong resemblance to last year’s design, which was found wanting in its pursuit of Mercedes.

But team principal Mattia Binotto insisted that appearances were deceptive. He acknowledged its superficial aesthetic similarity with the 2019 car but he emphasised: “We have been extreme on the concept as much as we could.”

The front wing was perhaps a surprise, in that it carries over the philosophy Ferrari pursued last year. This is effectively the opposite approach from Mercedes in the way it directs the airflow over the rest of the car, and one which is known to limit absolute downforce.

The wing on the launch car was an old one, the design that finished last season. But Binotto said the fundamental philosophy will remain.

“We will not change the concept whatever we test,” Binotto said. “We think it is the right concept for us. We improved the downforce a lot. If you look at the turning vanes [the aerodynamic shapers beside the cockpit] there is high complexity. The slimmer car makes the [rear] diffuser work better and the overall downforce has certainly increased.”

It was at the rear where the most obvious changes were to be found. Here, a lot of work has taken place to open up the airflow in the quest “for the maximum aero performance first, trying to maximise the downforce level,” Binotto said.

The rear suspension has been completely reworked, and the bodywork rear of the cockpit shrunk down as much as possible, in a style reminiscent of the Red Bull, which many felt by the end of last year was possibly the best chassis on the grid.

Will all this work? Ferrari realised they had taken a mis-step last year. In the quest for an efficient car, they had compromised downforce. And as the season wore on, it became increasingly clear this was a mistake.

Ferrari were very strong on tracks where straight-line speed was the overwhelmingly dominant factor, but these are few and far between, and on others, they struggled, their lack of grip in the corners not only affecting performance over one lap but also increasing tyre wear, a particularly debilitating effect over a race distance.

Whether the changes over the winter are enough in the face of the advances Mercedes and Red Bull will inevitably make is another question.

The performance of the car was far from Ferrari’s only problem last year; Binotto also found difficulty in managing the drivers.

Vettel started the year as number one, but Leclerc increasingly usurped him as the season developed, at one point out-qualifying his illustrious partner for nine consecutive races, and beating him on every possible metric.

Vettel, the proud champion, did not take kindly to this, and it led to a series of flashpoints on track, culminating in the two drivers crashing into each other at the penultimate race in Brazil.

Binotto acknowledged on Tuesday that he could not start the season with the same approach to the drivers as he did last year, when the team continually got themselves in a tangle trying to impose team orders of one kind or another, and the drivers pushed back as hard as they dared.

“It is a year after,” he said. “Charles has got a year’s experience and while last year we said Seb would be first driver and Charles second, both have proved they can fight for the best results. So they will be on the same level. They can both fight for being ahead as much as we get ahead and that’s it. So let them race.”

Leclerc said: “We both learned a lesson of what happened in Brazil. We are free to race but we are team-mates and there are a lot of people working behind the scenes on the car. So things like Brazil shouldn’t happen. The margins will probably be a bit bigger to be a bit more on the safe side.”

Leclerc’s biggest concern, he said, was to improve his performances in the grands prix themselves, where he believes he still has work to do to maximise his race pace.

“There have been a few mistakes,” said Leclerc, who is heading, it should be remembered, into only his third season in F1. “I have learnt many smaller lessons. It is quite a lot more complex in F1, and on this I have still got a lot of improvements to make. I am pretty sure there is room for improvements everywhere. If I have one target it is to improve in the race.”

The big question hangs over Vettel, though. It is he who has most to lose, his position in the team that is in question.

Vettel did not address this issue at the launch. But in any case he has perhaps a bigger concern, which is to cut out the repeated mistakes that have hampered his campaigns for the last three years.

At the launch, he chose to put a positive gloss on this: “Last year was a good year for me in the sense of learning and understanding a lot of things. There are things I can do better and I am sure I will do better this year. I am not stressed but ambitious to prove it to myself.”

The Hamilton question and a vote of confidence for Vettel

Leclerc has committed his future to Ferrari for five years until the end of 2024, and is clearly regarded as the future of the team; Vettel, by contrast, is out of contract at the end of the season.

He played down the significance of that.

“Two or three years ago, I didn’t have a contact until August,” he said. “I don’t think it changes much. You are focused on what’s going on in the moment but we will have enough time to [talk about the future]. I am not taking any extra stress or pressure.”

With Hamilton, too, out of contract, there has been fevered speculation as to whether the Briton could swap Brackley for Maranello for the closing stages of his career.

This is not considered likely – Mercedes team boss Toto Wolff said on Monday that it was “the obvious pairing” for them to continue together – but it cannot be dismissed entirely. Especially not as Ferrari admitted in December that Hamilton had briefly discussed his future with their president John Elkann.

But Binotto said that, for now, the team are thinking only of Vettel as Leclerc’s team-mate beyond 2020.

“Seb is out first choice at the moment,” Binotto said, “and it is something we are discussing with him and we will continue to do so. But he is our first option at the moment.”

Was he ruling out a bid for Hamilton, then?

“We are focused on our drivers. We are not considering it at the moment.”