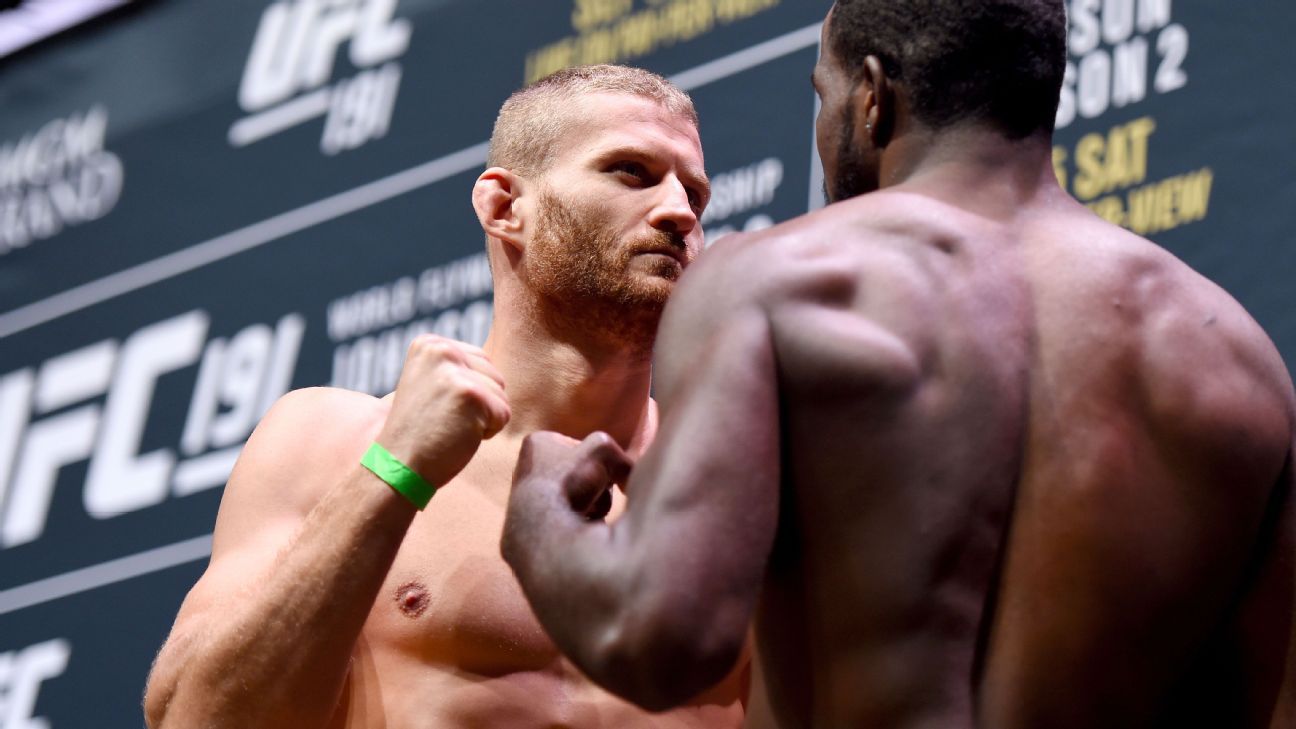 Earlier this week, I noted a few MMA phrases that really grind my gears.

“To be the champ, you gotta beat the champ,” “championship rounds mean more” and “I can’t believe that was a unanimous decision” are a few of them.

You know what’s another one? “Don’t leave it in the hands of the judges.”

This one really bugs me because it’s actual advice we give fighters. How crazy is that? These men and women are fighting their hearts out. They have enough to worry about. If a fight goes the distance, is that such a big deal?

I know it’s weird for me to bring this up this week, as we all lament the state of MMA judging, but I have a perfectly good reason, and it’s not what you think.

You see, on Saturday, light heavyweight contenders Corey Anderson and Jan Blachowicz are headlining UFC Fight Night in Rio Rancho, New Mexico. It’s a very important fight in the 205-pound division, especially considering that division’s title was defended this past weekend. After all, it’s good for contenders to fight around the same time as the champion.

Had Jon Jones easily defeated Dominick Reyes this past Saturday in Houston, I would have said to either Anderson or Blachowicz, just get a win, and you’re next. But of course, Jones didn’t easily defeat Reyes.

And so, I am here to offer a little piece of advice to Anderson and Blachowicz. They can take it or leave it, but I believe it to be very true.

Don’t leave it in the hands of the judges.

Because if you do, you can kiss that title shot goodbye.

Trust me, I hate writing this kind of stuff. I think when we speak like this, we are exemplifying a lack of respect and compassion for what fighters endure in their fights. As you might have read last week, I thought the winner of this fight was in prime position to fight for the belt next, should Jones retain, regardless of how they won. The problem is that Jones won a controversial decision, and the current feeling is that Reyes deserves an immediate rematch (a sentiment I agree with).

If either Anderson or Blachowicz scores an impressive knockout on Saturday — sort of like the one Anderson scored against Johnny Walker in November — perhaps the powers that be will think Jones vs. the winner is a sexy fight to make, especially if the fans get excited. A decision won’t produce that kind of buzz.

That isn’t an indictment of the state of MMA judging. It’s more of a nod to Reyes, who is a king without a crown right now at 205. He is a king who deserves another shot at the champ, unless something supremely exciting happens this weekend that diverts our attention.

The pressure is now on Anderson and Blachowicz to create that moment. Otherwise, Reyes should find himself right back in the driver’s seat.

I like the fact that we are all talking about how to improve judging this week. I like the idea of testing open scoring or overhauling the 10-point must system. This is healthy discourse.

But here’s one idea that I haven’t heard brought up much the past few days: education.

Are commissions doing enough to educate their officials? Are they picking the absolute best judges and referees to oversee these massive fights? Or are they doing the bare minimum?

For the most part, my feeling is that they are doing the bare minimum.

We can tinker with the system as much as we want, but if we have uneducated people in place, it won’t matter. And though I hate to pick on Joe Soliz, his scorecards indicate that he lacks a basic understanding of how to judge an MMA fight. That’s the real problem.

I was talking to a highly respected commissioner Tuesday morning, and he said there are about 14 competent referees and judges in MMA. Fourteen. That’s it. Think about that. We’re talking about a multibillion-dollar sport. At the end of the day, we’re leaving it in the hands of 14 judges, who are not all working the biggest fight cards every weekend. That’s a problem.

It’s incumbent upon the commissions to educate them as much as possible.

While I know the promotions don’t and shouldn’t have a say on who is officiating fights in North America, is that the best course of action while the sport is still so young?

What’s wrong with this process:

Commission: Hey, promoter X, we’re thinking of assigning these judges and referees for the event next month. Any objections?

Promoter: Yeah, we don’t think referee A and judge B have enough experience to work one of our shows.

Commission: Fair enough, whom do you recommend? Or what do you think of referee B and judge C?

See what I mean? Does this discourse happen before events? To the best of my knowledge, it does with some commissions but not all. At the very least, it should be part of the process.

Maybe I’m naïve, but I really don’t think open scoring, especially in a three- or five-round MMA fight, will result in uninspired performances by fighters who are ahead on the scorecards. It’s hard to not engage when you’re fighting in a cage and you have another fighter coming for your head with 4-ounce gloves on.

But here’s the bigger issue with open scoring: Have you seen the state of MMA judging? What if judge X is sitting cageside and thinks he’s doing a great job scoring, say, the first round 10-9 for Trevin Giles against James Krause (I still can’t believe that one)? And then let’s say he learns the other two judges scored that round a 10-9 for Krause. Does the judge begin to panic? Does he begin to doubt himself? Does he get in his own head when he should be focusing on the fight? My fear is yes. And that’s a big problem.

Valentina Shevchenko explains why she thinks her next fight will be against Joanne Calderwood and describes her timeline for a return.

1. I take back everything I said about Jones moving up to heavyweight later this year. I think he should stick around at light heavyweight for the foreseeable future.

2. I’ve decided these should be the next fights for Valentina Shevchenko and Amanda Nunes: Shevchenko vs. Joanne Calderwood and Nunes vs. Irene Aldana. The trilogy can wait.

3. I think the Conor McGregor sweepstakes is like a loose rebound that is just bouncing on the court, and no one wants to pick it up. Is anyone going to emerge as the front-runner?

4. I’m still in awe of what James Krause did this past weekend.

5. Why does it feel like Bellator has no momentum right now?

6. I am excited to see Brok Weaver back in action this weekend.

7. I’m surprised the UFC has released Brad Katona, who is 2-2 inside the Octagon (but has lost two straight). I thought he would get another shot.

8. Athletes lose graciously in all sports. That is not unique to MMA. But when you consider the amount of money Dominick Reyes potentially lost this past Saturday and the way he handled said loss with class, it’s remarkable.

One last thing: Just because you score a fight in favor of someone doesn’t mean you hate the other person. That should go without saying, but I learned this week that maybe it doesn’t. That is all.

Enjoy the fights this weekend.