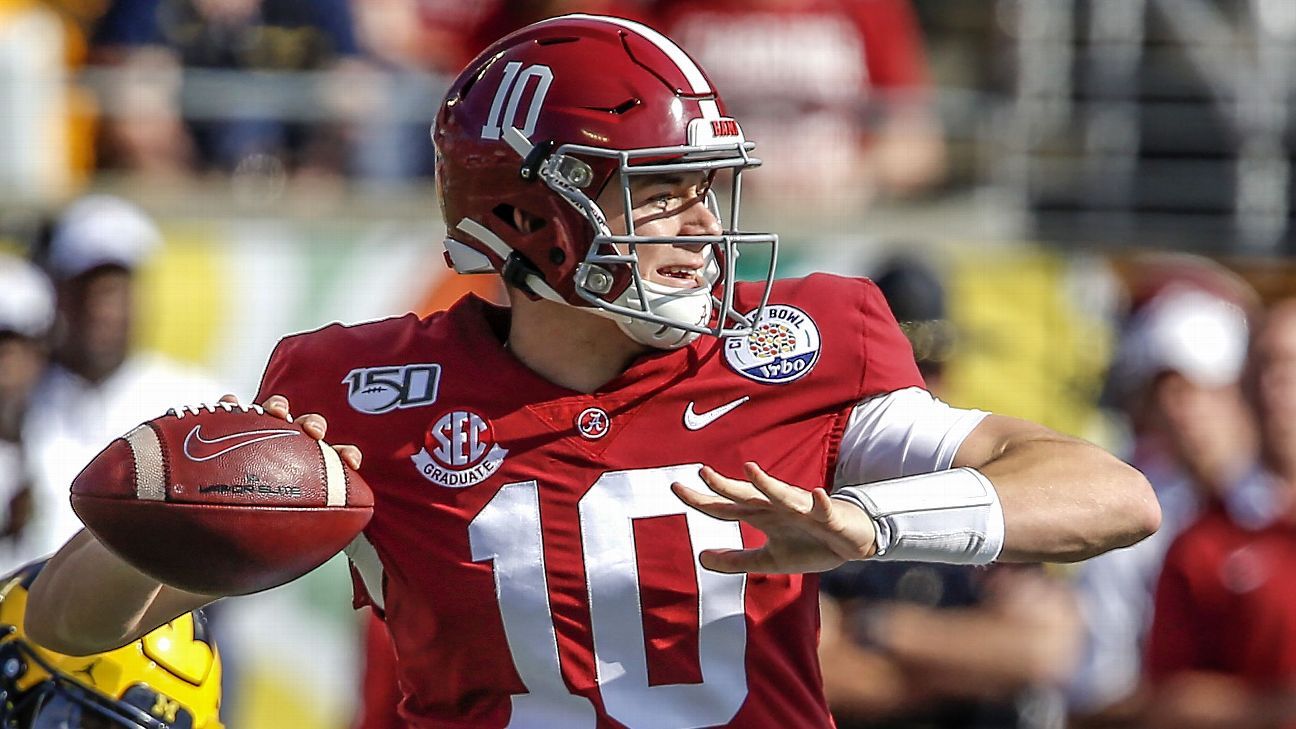 Each offseason, after the recruiting season has been finalized and the first major wave of transfer portal entries has come and gone, I publish preliminary SP+ ratings for the coming season. I base these projections on three primary factors, weighted by their predictiveness:

1. Returning production. Last week we published my initial returning production rankings for 2020, based on players graduating, leaving for the pros, transferring, etc. Estimating improvement or regression based on these percentages and applying it to last year’s SP+ ratings accounts for more than 50% of the overall numbers below.

2. Recent recruiting. After determining how much of last year’s team is being brought back, the next step is to determine the caliber of the players who will be filling in the missing returning production. To do that, I use a weighted mix of recent recruiting rankings. They primarily pull from the past two recruiting classes, but I have begun to incorporate older classes as well, to a lesser degree. No matter what the “stars don’t matter” crowd will tell you, recruiting rankings are extremely predictive, and these projections are more effective because of them.

3. Recent history. While last year’s SP+ ratings are taken into account with the returning production estimates above, I’ve found that involving previous years’ performances as well gives us a nice way of estimating overall program health. It stands to reason that a team that has played well for one year is less likely to duplicate that effort than a team that has been good for years on end (and vice versa), right? Recent history accounts for less than 10% of the overall projections; it is a minor factor, but the projections are better with it than without.

Using this mix for last year’s projections was incredibly effective, as evidenced by SP+’s 58% performance against the spread in the first five weeks of last season. Hopefully this year’s will be as effective.

I will update these numbers in August, once further transfers, injuries and more can be taken into account. But here are the estimates to date.

A reminder on SP+: It’s a tempo- and opponent-adjusted measure of college football efficiency. I created the system at Football Outsiders in 2008, and as my experience with both college football and its stats has grown, I have made quite a few tweaks to the system. SP+ is intended to be predictive and forward-facing. That is important to remember. It is not a résumé ranking that gives credit for big wins or particularly brave scheduling — no good predictive system is. It is simply a measure of the most sustainable and predictable aspects of football. If you’re lucky or unimpressive in a win, your rating will probably fall. If you’re strong and unlucky in a loss, it will probably rise.

Note: In-season, SP+ also takes special teams into account. But I have not yet established a solid way to project special teams ratings, so for these projections it is assumed that everyone’s ST rating is 0.0.

For the most part, these projections match up reasonably well with our offseason assumptions. Sure, you might have the top three teams in a different order, but you still probably have Alabama, Ohio State and Clemson in your top three, or very close to it. Meanwhile, the presence of LSU, Georgia, Florida, and Oklahoma, in some order, near the top feels about right, too.

Still, SP+ offers some differences in opinion. Using Mark Schlabach’s Way-Too-Early 2020 Top 25 as our guide, here are some of the teams for which the stats and eyeballs might be in a little bit of disagreement.

I was expecting Ohio State and Clemson as the top two teams here, and you probably were, too. But the injury that defined Bama’s 2019 season helped boost its 2020 odds. Losing quarterback Tua Tagovailoa to injury for four late games meant that backup Mac Jones got an extended audition in the starting role, and he looked mostly great. He produced a better passer rating against Auburn than LSU’s Joe Burrow and a better rating against Michigan than Ohio State’s Justin Fields.

Because the Tide return Jones’ 1,503 passing yards (plus 100 more from Taulia Tagovailoa) — not to mention the contributions of receivers DeVonta Smith and Jaylen Waddle, running back Najee Harris, most of the offensive line, and most of the defensive front seven — they boast a better returning production ranking (88th) than Ohio State (93rd), Clemson (96th), LSU (127th), etc.

That, combined with consistently elite recruiting and performance (the Tide haven’t finished lower than third in SP+ since 2008), pushed Bama to the top. Disagree if you want, but allow this to be a reminder that Nick Saban’s run of greatness in Tuscaloosa probably isn’t over.

Most people view Penn State as a potential top-10 team for sure, but James Franklin’s Nittany Lions stole a top-five slot primarily because of experience. They return starting quarterback Sean Clifford, their top three running backs, four of their top six receiving targets, and six offensive linemen with at least 250 snaps in 2019. Plus, while they have to replace a few disruptors in the defensive front seven, the secondary — by far the most important unit on your defense from a returning production perspective — is deep and seasoned.

Wisconsin might be a bit higher than expected, too, benefiting from the fact that losing rushing production (like Jonathan Taylor‘s 2,000 yards) doesn’t hurt you that much in the returning production formula. That, and look at the defense the Badgers are returning. They ranked 14th in defensive SP+ last year and are currently slated to bring back every defensive back, every defensive lineman, and four of their top six linebackers. That bumps them to a No. 4 projection on defense.

The narrative early this offseason is that the Pac-12 race is Oregon vs. the field. Mario Cristobal’s recruiting is strong, and the Ducks are the defending conference champions.

SP+ never got fully on board with the 2019 Ducks, however. They finished just 15th thanks to inconsistency on both sides of the ball, and now they have to replace not only star quarterback Justin Herbert, but also five of their top six offensive linemen. The defense is deep and experienced and is projected to leap into the top five in defensive SP+. The offense, however, is projected 51st.

(Cristobal potentially made an offensive coordinator upgrade in bringing in Joe Moorhead, but that’s not something the numbers take into account.)

Oregon is still the top-ranked Pac-12 team, but only by two points because of what USC brings back offensively.

USC often gets overhyped because of typically great recruiting rankings, but SP+ likes the Trojans despite their recruiting, which barely ranks at a top-40 level thanks to a dud class in 2020.

But coordinator Graham Harrell’s offense improved dramatically last year and returns quarterback Kedon Slovis, three of four primary WRs and virtually every running back. Plus, for what it’s worth, 14 of the 16 defenders who logged at least 13 tackles last year (note: I count assists as 0.5 tackles) are back as well, virtually guaranteeing improvement there.

Schlabach rankings: No. 24 and NR, respectively

Numbers and conventional wisdom agree most of the time, but there’s no question that, like the people who design them, systems like SP+ can have an anti-social streak.

SP+ was adamant that both Texas and Nebraska would drastically struggle to meet the hype they brought into 2019. Tom Herman’s Longhorns began the season 10th in the preseason AP poll, and despite eight wins in two years, Nebraska began the season 24th. SP+, instead, ranked them both outside the top 30 and projected 14 wins between them. They won 13.

That was last year, however. This time around, the Horns and Huskers might be … gasp … underrated? Texas just signed another elite recruiting class and, more importantly for SP+’s purposes, brings back quarterback Sam Ehlinger and a defense with infinitely more experience, especially in the secondary. Nebraska returns almost everyone on offense and is projected to make a major leap there. Defense could still hold the Huskers back, but they’re experienced in the secondary, at least.

Evidently 2020 is going to be the year 2019 was supposed to be for these two once-mighty programs.

Schlabach rankings: NR and No. 17, respectively

That Cincinnati retained head coach Luke Fickell despite major overtures from Michigan State was a massive offseason victory. The Bearcats could enjoy top-20 hype heading into 2020 but might struggle to clear a high bar for two main reasons:

1. Offense. UC has improved in this regard for each of the past two years but only incrementally. The Bearcats finished 65th in offensive SP+ last year and are projected to rise to only 57th this time. That could hold back what might be an incredible defense.

2. UCF. Josh Heupel’s Knights got a dose of bad close-game fortune for the first time in years last fall, losing three games by a combined seven points. They finished as high as ever in SP+, though, and now they bring back quarterback Dillon Gabriel and a massively experienced defense. (They might also have quarterback McKenzie Milton, whose recovery from a gruesome 2018 knee injury is still ongoing.) UCF will begin the season as the top-ranked Group of 5 team.

While SP+ is extremely high on Texas for a change, it’s not nearly as bullish on the other major contenders for the No. 2 spot in the Big 12 behind Oklahoma. It ranks Oklahoma State five spots lower than Schlabach does, ISU 10 spots lower and Baylor 20 spots lower. The major reasons why:

SP+ seemed to have a strange crush on Manny Diaz’s Hurricanes last year, continuing to rank them in the top 30 no matter how many unlikely ways they found to lose football games. A combination of bad breaks and bad offense led to a 6-7 finish, and while Diaz can’t do much about the former, he addressed the latter by bringing in not only a new offensive coordinator (Rhett Lashlee) but also Houston quarterback D’Eriq King.

The U also brings back five of its top seven receivers and basically every offensive lineman. The defensive front seven will need a lot of new contributors to step up (the addition of star Temple end Quincy Roche will help), but the secondary is seasoned, at least, and there aren’t usually many reasons to doubt a Diaz defense.