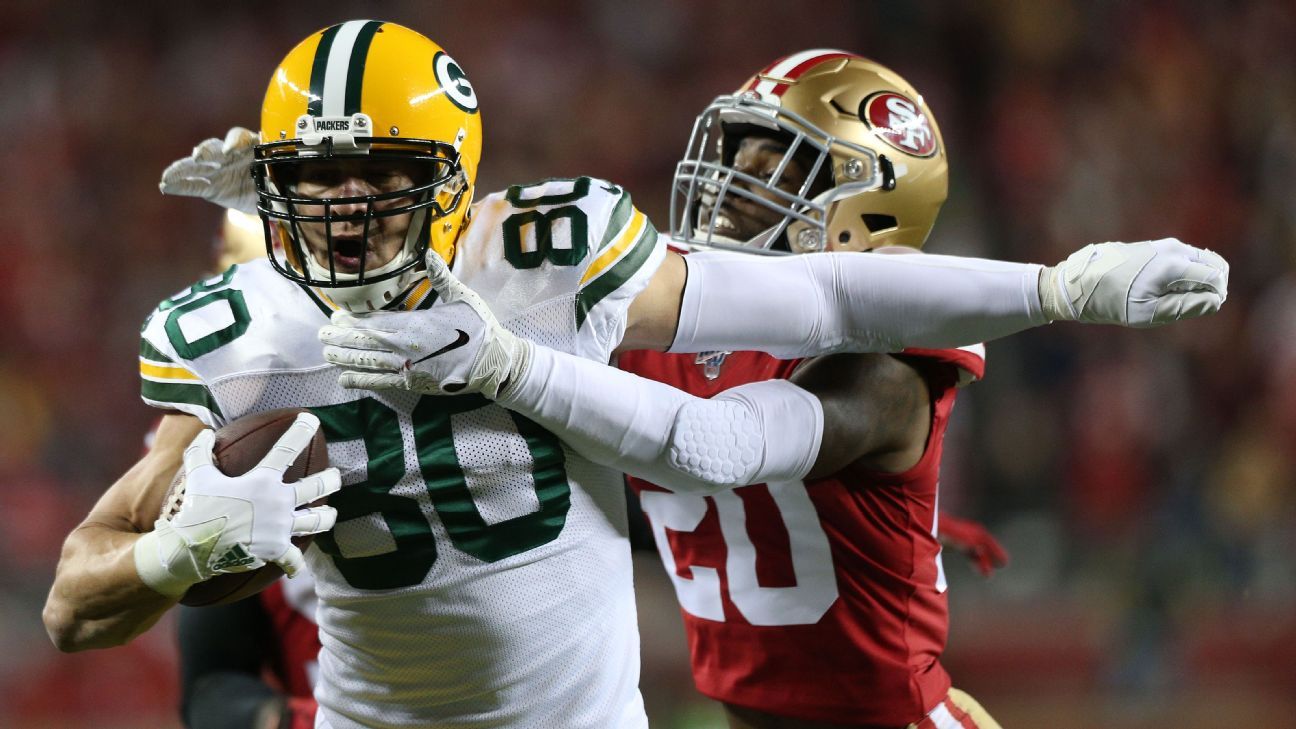 GREEN BAY, Wis. — In the salary-cap-space-versus-production world of the NFL, the Green Bay Packers have one major problem and one minor one.

Jimmy Graham is the former.

Lane Taylor is the latter.

The Packers likely have one way to solve both issues: move on.

That would actually be more cap space than the Packers had when they entered free agency last year (about $35 million) and made four high-priced moves in the first week. But this year, they have more free-agents-to-be that they’d like to keep and more contract extensions looming, which is why Packers general manager Brian Gutekunst said: “I think there’s going to be a little bit more restrictions if we’re able to do everything we want to do with the guys who are here already, to be able to do something like we did last year.”

But when Gutekunst added, “We’re pretty sound financially right now to do what we need to do to get where we need to go,” perhaps he already knew what he was going to do with Graham and Taylor.

Graham ranks as the highest-paid tight end in the NFL with an average salary of $10 million. This season he is scheduled to take up the second-most salary cap space ($11,666,668) of any tight end in the NFL, trailing only Philadelphia Eagles star Zach Ertz ($12.231 million).

Last season, Graham ranked first in cap charge among tight ends ($12,666,666) while his second season with the Packers was barely different than his first. Although respected in the locker room, Graham’s on-field impact was negligible: 38 catches for 447 yards and three touchdowns. In two seasons with the Packers, he totaled just five touchdowns — half of what he scored in his final year with the Seahawks in 2017.

If signing Graham to a three-year, $30 million deal was a mistake in the first place and bringing him back for the 2019 season was the second, it’s hard to imagine that the otherwise adept Gutekunst would triple down on a 33-year-old tight end. The Packers would have to count $3,666,668 (his remaining signing bonus proration) in dead money from Graham’s contract, but the rest of his cap number would be wiped out.

If anything, the Packers have gotten more for their money from fellow veteran tight end Marcedes Lewis, who played the past two seasons under one-year deals that totaled $4.2 million. Lewis has said he would like to return for a 15th NFL season and, like Graham, he quickly became a locker room favorite of quarterback Aaron Rodgers.

“I know that Jimmy’s numbers probably aren’t where he wants them to be or certainly where other people want them,” Gutekunst said. “But I was glad we had him in a lot of the situations we were in this year.”

The wild card could be Jace Sternberger, the third-round pick from last year. His rookie season looked like a washout after two injuries (an early training camp concussion and a late preseason ankle injury that landed him on injured reserve) until he became a surprising late-season contributor after he was activated. He played almost 100 snaps over the final five games plus playoffs and caught his first career touchdown pass in the NFC Championship Game. Coach Matt LaFleur even used Sternberger in an H-back role after fullback Danny Vitale suffered a late-season knee injury.

“The flexibility he gives us — obviously he’s got a lot of speed that can stretch the seam, he’s a matchup problem for linebackers and safeties — but then I think at the end there you saw Matt put him in the backfield and move him around a little bit,” Gutekunst said. “I think that’s what you’re going to see with Jace. I think he can be one of those guys as he develops where he can play from a lot of different places and be a matchup problem. I’m excited for him. Excited for him to gain some confidence toward the end of the season that will hopefully be a little bit of a push going into next year.”

Taylor’s salary and cap charge aren’t as prohibitive as Graham’s, but he might not be needed anymore. A biceps injury in Week 2 ended his season, and the Packers managed just fine with rookie second-round pick Elgton Jenkins in his place. Jenkins earned all-rookie honors from the Pro Football Writers of America.

Taylor ranks 26th among all NFL guards with a 2020 salary-cap figure of $5.8 million. Minus the $1.25 million in dead money, the Packers would save the rest on their cap.

The former undrafted free agent proved serviceable at a position where the Packers have chosen not to spend big money of late. Remember, they moved on from T.J. Lang and cut Josh Sitton in recent years.

In Jenkins, they have what many scouts believe is a potential long-term, high-level starter. However, several scouts and coaches around the league that were consulted about the possibility of moving Jenkins to right tackle believe he could have the same level of success there if the Packers wanted to move him in the event they don’t re-sign Bryan Bulaga, who finished the last year of his contract. Also, the Packers signed versatile backup offensive lineman Lucas Patrick to a modest contract extension (two years, $3 million) in December that gives them a cheaper option over Taylor. Perhaps Taylor would be open to a pay cut/restructure.

Neither Graham nor Taylor has an offseason roster bonus like outside linebacker Nick Perry did last year. The Packers cut Perry on March 12, just before free agency, to avoid paying him a $4.8 million roster bonus. They could wait to see what free agency and the draft brings and then make a decision. However, if either one suffered a season-ending injury during offseason workouts, then they would be on the hook financially.